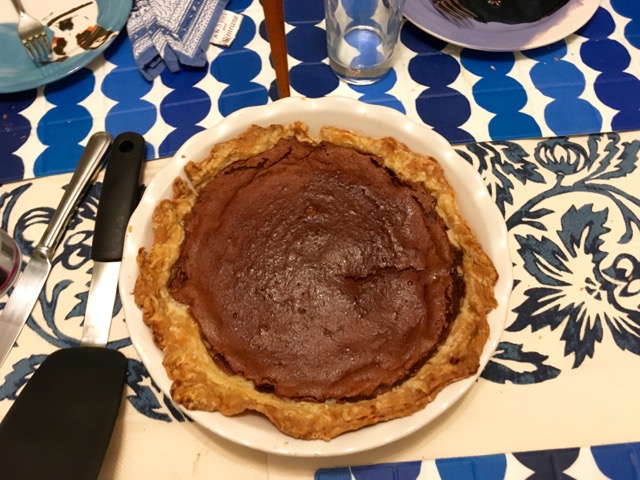 There’s something about chocolate pie that seems sort of wrong, right? Not because it photographs blurry—that’s just science!—or because its appealing exterior could be hiding an unwelcome surprise, but because it’s too… showy, somehow.

Pie is barely sweetened peak-season fruit and soft, warming spices; pie is rich custard that refuses to hold its shape when sliced and placed onto a plate; pie is labor-intensive but somehow unfussy. Pie is humble. Pie is not a moist, dense, almost criminally rich flourless chocolate cake baked in a pie dish, a dessert that earns its name only because it happens to be encased in a buttery, fully unnecessary crust.

Yet here we are. And though Nonnie’s chocolate fudge pie is very much a gilded lily—not pudding in a pie shell, as one might expect, but more like a one-layer piecaken—I can’t deny its obvious appeal. Unlike its cherry or strawberry-stuffed cousins, it’s made of pantry staples, so it’s easy to construct regardless of season; it’s less fussy than key lime, with no citrus-squeezing or meringue-construction required, and less messy than banana cream.  Plus, I’ve heard that everyone loves chocolate. 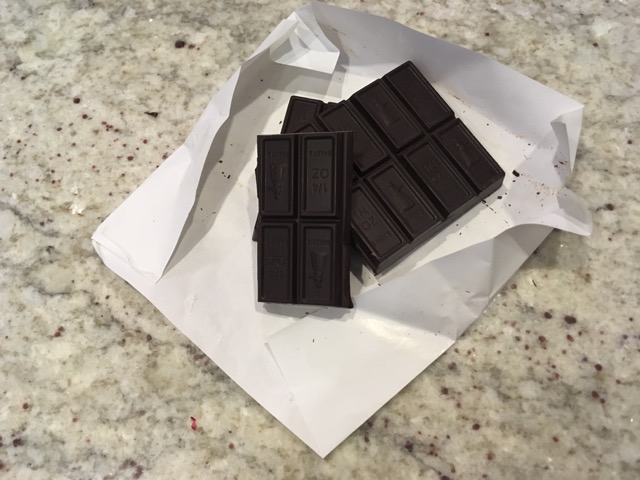 So yes, chocolate pie feels like a bit of a cheat—but if you make one this holiday season, I can all but guarantee you’ll be the hit of the party. Especially if you bring along one an aerosol bottle of Reddi Wip, because as long as you’re cheating, you might as well go all the way.

Melt butter and chocolate in top of double boiler, over low heat. [Or just do it in the microwave, because who even has a double boiler?] Beat eggs until light. Beat honey, sugar, salt, and vanilla into eggs. Cool chocolate mixture and add to egg mixture. Mix thoroughly and turn into pie shell. 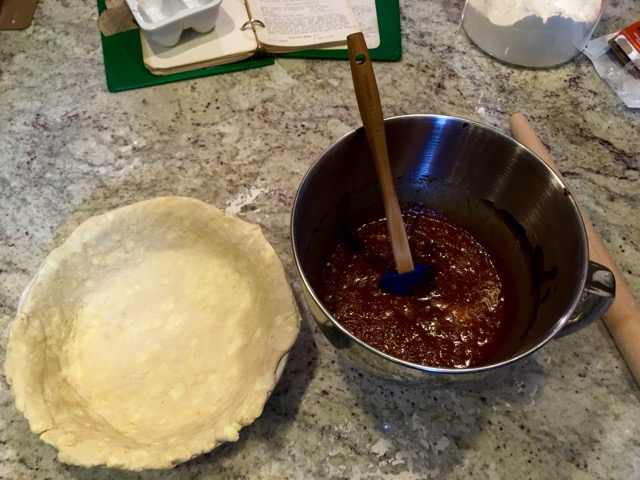 Bake at 350 for 25-30 minutes, or until top is crusty, and filling is set but soft inside. [This… is not nearly enough time! But more on that in a sec.] Do not over-bake. Serve lukewarm with whipped cream topping.

The verdict: After 30 minute in the oven, my pie was still completely liquid. At 50 minutes, it still wobbled considerably. I ended up leaving it in there for a full hour, despite Nonnie’s exhortation against overbaking; the top ended up a tiny bit cracked, and the crust was browner than I wanted it, but the filling itself wasn’t dried out beneath that outer layer.

After searching around a bit, I found a few flourless chocolate cake recipes that bake at 375 instead of 350; increasing the heat 25 degrees probably would’ve cut down that endless oven time. Adding in some flour also would have led the pie to set more quickly, I imagine, as would using some sort of thickener like condensed milk; I’d play around with this recipe if I made it again, if for no other reason than to find a way to bake it more quickly. Though it did come together eventually, even as written.

About that filling? Once again, this is basically a flourless brownie inside of a pie crust—delicious, but I wouldn’t count on driving or operating any heavy machinery after indulging. Though the recipe called for both honey and sugar, there wasn’t much honey flavor in the final product; instead, the pie has notes of chocolate, chocolate, and chocolate, with an overwhelming taste of chocolate at the finish. Not that anyone was complaining. 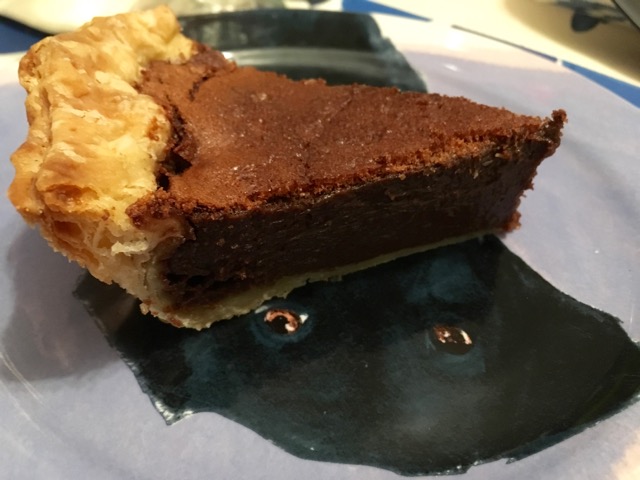