The Sunday before last—which I spent on weekend edit duty, which meant a full day immersed in this atrocity—I posted the above photo on Instagram with this caption: “The world is bad, so I made a pie.”

My old boss responded with a perfectly chosen Onion article, first published on September 26, 2001: “Not Knowing What Else To Do, Woman Bakes American-Flag Cake.”

Well… yeah. I feel a real kinship with Christine Pearson, 33, even though she’s fictional: “I had to do something to force myself away from the TV,” she says in the article. “All of those people. Those poor people. I don’t know what else to do.”

But that’s the way it goes, right? When the world fills us with unimaginable despair, we respond by attempting to make some sort of positive contribution, no matter how infinitesimal—or, alternately, by looking for solace wherever we can: in yelling about TV shows on the Internet, or watching dumb videos about animals who are friends with other animals, or baking a pretty pie filled with early summer strawberries.

None of this is guaranteed to fix anything, of course, or even make us feel like we’ve actually accomplished something of value in the face of tragedy—but what else are you going to do, right? As a wise man once wrote: “look. life is bad. evryones sad. we’re all gona die. but i alredy bought this inflatable boumcy castle so r u gona take ur shoes off or wat?”

And hey, making a pie’s a lot easier than renting a bouncy castle. 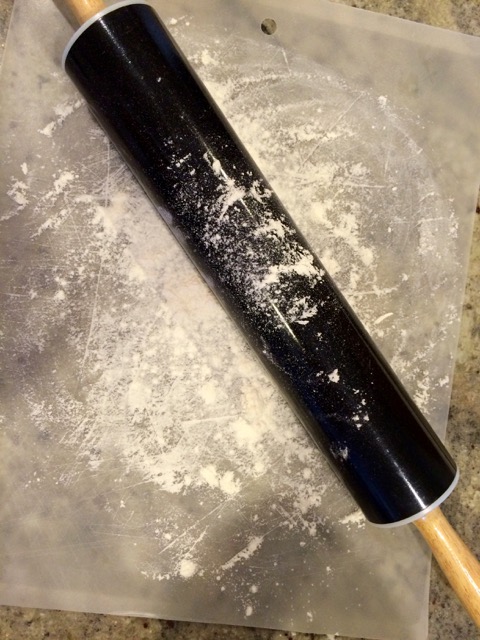 2/3 cup chilled shortening [I used Crisco, because I figured that’s what Nonnie probably did—even though I was a little dismayed to read on the back of the can that this stuff can “catch fire if overheated.” Like, in an oven, or…?]
2 cups flour
1 teaspoon sugar
1 teaspoon salt
Scant 1/4 cup ice water

Sift flour. Measure, add salt and sugar, and sift again. [A fussy step, and one I’ll in all likelihood skip the next time I make one of Nonnie’s pies.] Remove 1/3 cup flour mixture and set aside.

Using a pastry cutter (or 2 knives), cut half the shortening into flour until mixture resembles coarse corn meal. [Like so:]

Add the ice water to the 1/3 cup flour mixture and make a paste. Stir the flour-paste into the flour-shortening mixture to form a dough.

Gather together with a fork (do not use hands) into a ball. [This is another fussy thing you’ll actually want to abide by, if you can—your hands are warm, and you want the dough to stay as cold as possible. That being said, my dough was difficult enough to deal with that I ended up dumping what I had onto a sheet of Saran Wrap and using the edges of the wrap to force the shaggy pile of clumps to form a firmer ball—which kept my fingers from coming into direct contact with it, but only barely.] Wrap ball of dough in wax paper and chill.

When ready to roll, cut ball in half and roll, on a well-floured rolling pin, for the bottom crust of a 9″ pie. [I made a half-recipe of dough since I was only making a one-crust pie, but the crust was thinner than I’d have liked it to be; I might bump up the recipe’s proportions to include 1/4 cup more flour per half,  in order to give the crust a bit more heft.]

Repeat process with other half of dough for top crust [if that’s the sort of pie you’re making, of course].

When making a one-crust pie, be sure to chill crust (in pan) before baking. Also prick the pastry all over before chilling. [Both these steps are helpful ways to keep the dough from shrinking in the oven, pulling away from the sides of your pie pan and reducing the size of your end product.]

Bake on upper shelf of a pre-heated 450 oven for about 15 minutes, or until lightly browned [if you’re making a pie that requires a pre-baked crust, which, in this case, we are. I also think that oven temp is a bit too high; I’d lower it to 425 or 400 next time]. Transfer to lower shelf if edges are browning too fast. If shell bulges during baking, prick it again. [You could also cover the crust with foil and fill the cavity with pie weights, or dry beans—but you don’t really need to, as long as you keep a close eye on it.] Cool shell before adding filling.

3-4 boxes fresh strawberries [I bought two quart-sized boxes and ended up using about three cups in this pie, which meant having berries leftover—which I’m certainly not complaining about]
4 tablespoons cornstarch
1 1/3 cup sugar [Yep, it’s a lot, especially if your berries are fresh and ripe; I’d reduce this amount fairly drastically next time, maybe knocking it all the way down to 3/4 of a cup]
9″ baked pastry shell [which we just made! Hooray!]
1 cup whipping cream, whipped

Wash and hull strawberries. Set aside large strawberries. Make 2 cups pulp in blender or processor [or by using an immersion blender, if you’ve got one; it’s much less messy].

Mix sugar with cornstarch. Place strawberry pulp, sugar, and cornstarch in a saucepan and cook over low heat, stirring constantly, until mixture thickens. [You’re looking for a jam-esque consistency, something shiny and viscous and decidedly artificial-looking, even though everything in there is recognizably food.] Remove from heat and cool.

Slice some of whole berries and place on top of piecrust. Pour cool strawberry mixture over berries. Refrigerate.

When ready to serve, top with whipping cream and garnish with whole berries.

The verdict: You know what? I’m pretty happy with my despair pie, all things considered.

Sure, the crust was too thin (and slightly too well done in places), the filling had too much sugar (although it seemed to mellow the longer the pie cooled in the fridge, maybe because cold things always taste less sweet), and a pie made with just fresh strawberries rather than pulverized ones probably would have been more visually appealing.

All that being said, it’d be pretty hard to screw up a dessert this simple—flaky crust, peak season produce, an ideal balance of crispy and gooey and creamy. Eating a piece won’t fix the world, but it’ll probably make you feel as if, for a moment, things are slightly, slightly less fucked.