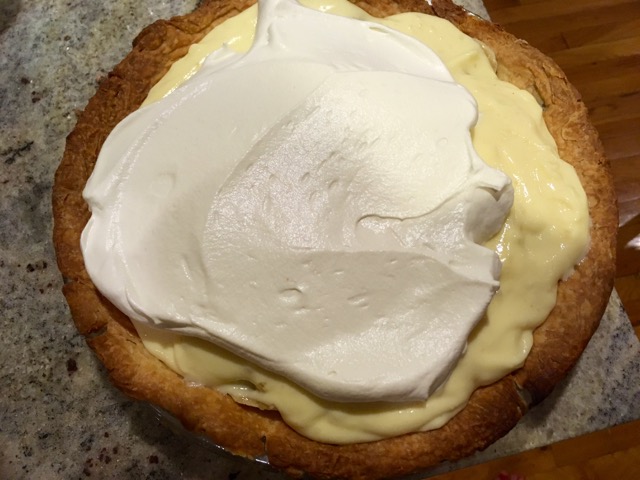 I mean, sure, it’s not the season for this kind of pie. This one isn’t crafted from seasonal, indigenously American ingredients, humble orange things that grow on the ground or just below its surface. No, it’s really more of a cold-weather pie—a blind-baked crust topped with tropical fruit and a fridge-chilled filling, albeit one that doesn’t necessarily scream “swimsuit weather.” Hell, eat enough of this gut bomb, and you might just never wear a swimsuit again. (Unrelated: ask me about my post-honeymoon, post-election-depression bloat!) 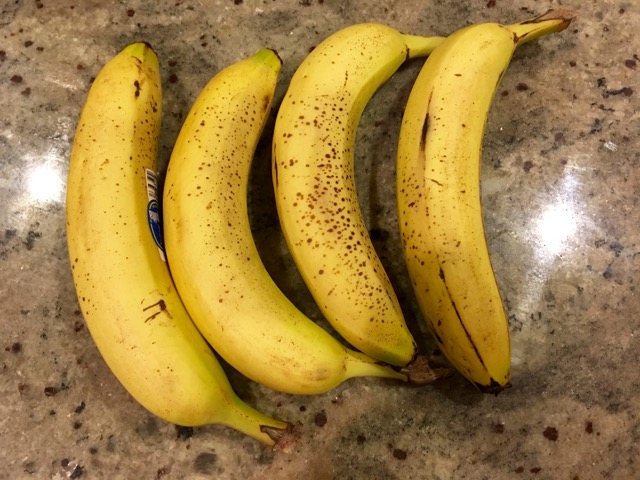 All that said: I want to make a case for good ol’ banana cream, a pie that’s less precious than pumpkin or pecan (waiter, there is too much pepper in my paprikash). It’s one of those desserts that is destined to become a glorious mess the moment you slice into it, like any good fruit pie not soldered together by a ton of corn starch or gelatin; it is not neat, or refined, or sophisticated. It is, instead, basically just complicated pudding encased in carbs and whipped cream, something that, for a grownup, is just slightly less embarrassing to eat  than a cupcake. Except unlike a cupcake, it’s pretty emphatically un-Pinterest-able. I mean, look at it: 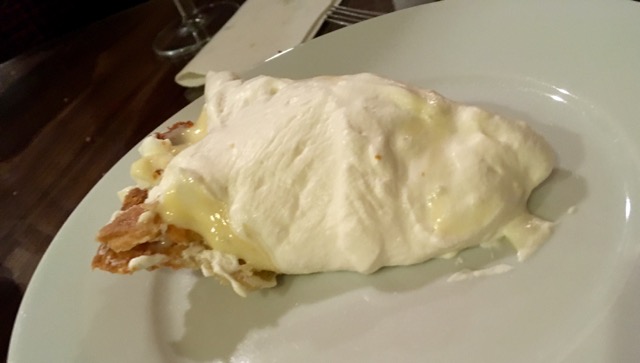 That is a straight-up Instagram disaster—but a delicious one, and one that might just bring a breath of fresh, banana-scented air to your Turkey Day table. Is it untraditional? Sure—but you know that the Pilgrims actually ate, like, sticks and rocks at the first Thanksgiving, right? (You know, when they weren’t busy running away from Wednesday Addams.) So why feel bound by tradition? It behooves me to add that the very hardest part about crafting this pie is putting together the crust, which you don’t even necessarily need to make from scratch—otherwise, it’s a make-ahead dream that calls only for some quick assembly and a generous slathering of whipped cream right before you serve it.

Maybe you don’t need to add quite as much cream as I did… but where would the fun be in that? 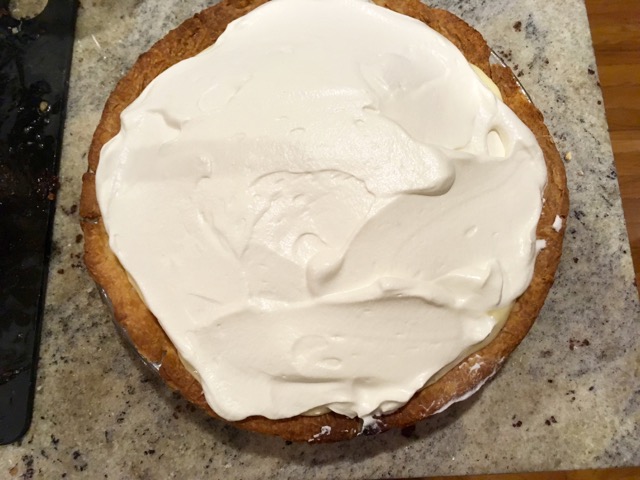 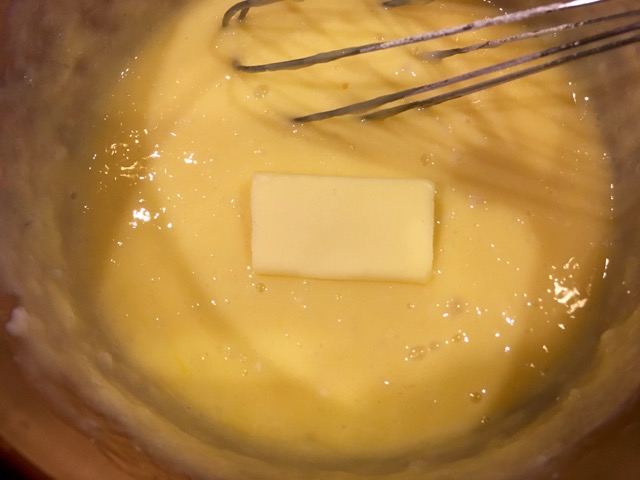 Combine sugar, salt, and cornstarch. Heat milk in top of double boiler, just to boiling point, and add cornstarch mixture. [The Lazy Lady’s solution: use a regular pot, and just be careful, for once in your goddamn life.] Stir mixture constantly, until smooth and thickened (about 15 minutes). [You really do have to be vigilant about the mixing, and about adding the cornstarch mixture to the liquid gradually; you don’t want any lumps mucking up your pie, especially since you already sorta failed this test by not owning a double boiler.]

Remove from heat; stir a small amount of mixture into eggs. Slowly pour eggs back into mixture. Add butter, and cook and stir about 5 minutes. Remove from heat and cool. Stir in vanilla and half and half. Chill. [Warning: this makes a metric ton of custard. Like, way more than you’ll need for this pie. Look at it, threatening to spill over like some sort of saturated fat tsunami—and that’s not even the entire yield. Don’t worry, though; chances are you’ll find some use for all the extra.] 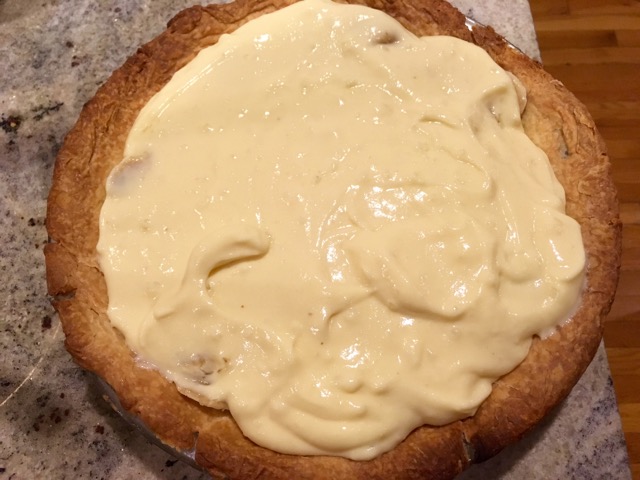 Just before serving, slice bananas on top of shell; pour chilled filling over bananas and top with whipped cream. [I neglected to take a picture of the bananas before I dropped in the custard, but believe me: they’re in there. Except I don’t think I ended up being able to fit all four.]

The verdict: The first thing you should know is what happened to all my excess custard: the lot of it was consumed by a ravenous dinner guest, who didn’t even bother to find a spoon before gleefully shoveling it down his gullet. Proof: 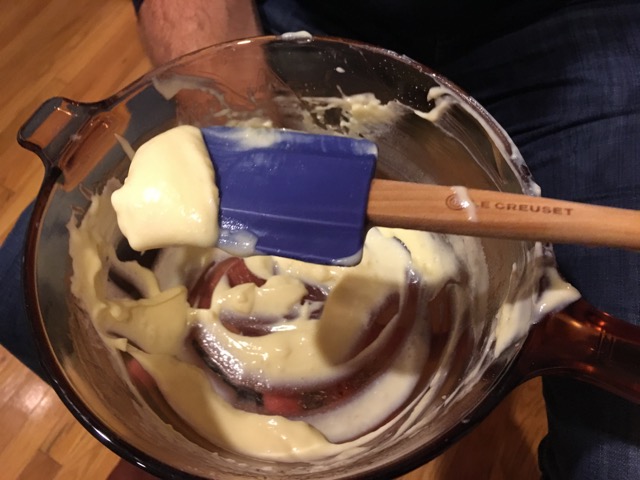 That should be about all the proof you need with regard to this pie’s irresistibility. Sure, mine could have used more bananas inside—maybe a ring of them on top of the crust? Maybe next time, I’d just use a deep-dish pie pan so there’s more room for them?—and a lighter hand with the whipped cream would definitely have made it easier to slice. That said, I think excess is part of the fun here. Nobody thinks of banana cream pie as being a restrained dessert; with that in mind, why not really go for it?

Word has it that the leftovers also make for an excellent, only slightly shame-inducing breakfast; regretfully, I can neither confirm nor deny that rumor. 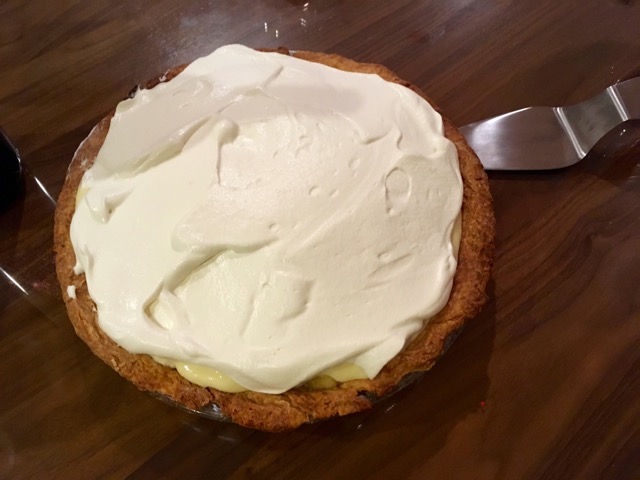