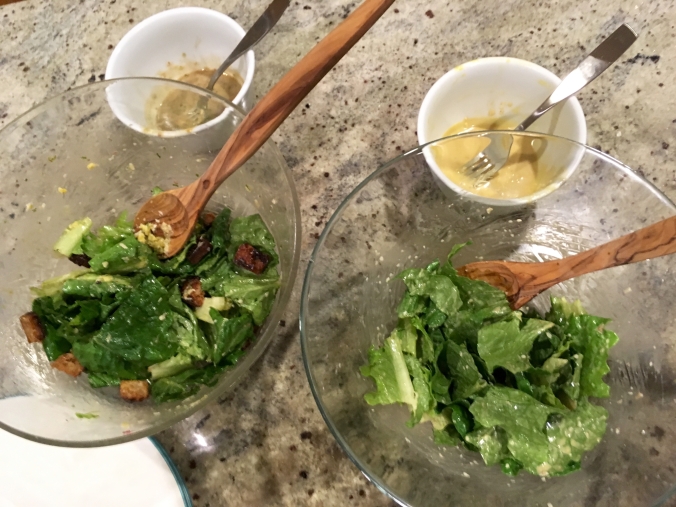 Oh, my poor, neglected blog! Can I make up for my long delinquency—blame award season, that hellish period where poor entertainment professionals are forced to work every weekend; pity us, for there are so many glamorous ceremonies to watch and movies to see!—by presenting you with not one, but two recipes?

Yes, they’re recipes for the same damn thing; yes, they vary only slightly. Even so, as something of a Caesar salad connoisseur—one who, sure, still can’t ever spell “connoisseur” correctly on the first try—I found the experience educational and illuminating. Caesar salad dressing is one of those things that’s not really up to interpretation. It’s not a homey folk dish with a zillion variations; it was definitively invented by a guy named Caesar, in the not-so-distant past. As such, you’re really only supposed to make it one way: a creamy, rich emulsion of anchovies, garlic, lemon juice, mustard, olive oil, Worcestershire, and, yes, raw egg (though there’s a way to make them slightly less raw, as we’ll discuss below), tossed with romaine lettuce, parmesan cheese, and crispy croutons. The ratios may differ slightly depending on whose instructions you’re following, but generally speaking, the song remains the same. 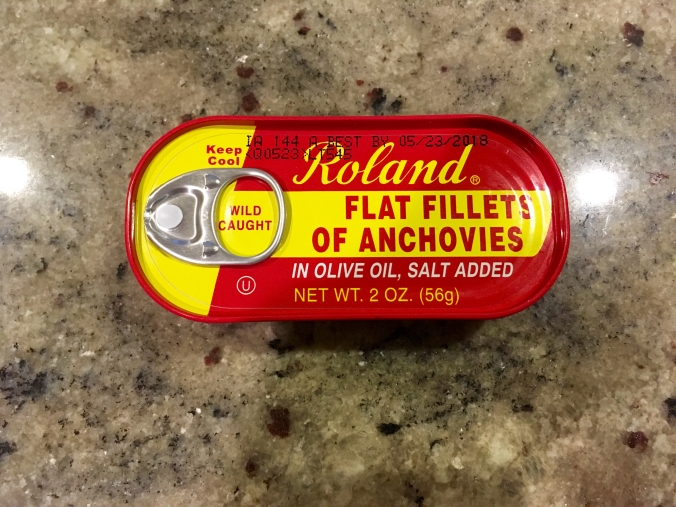 However! I’ve never met something simple that I couldn’t make unnecessarily complicated, and evidently, Nonnie was the same. On the blank page opposite the one that holds her official Caesar salad recipe, there’s a handwritten recipe for “David’s Caesar Dressing,” presumably named after my Caesar-loving uncle. (I have an uncle named David, a brother named David, and a stepfather named David; this is a rough schematic of my family.)

The second recipe differs slightly from the official party line. There’s parmesan in the dressing, rather than just tossed with the salad, and it’s also less anchovy-forward. There’s more lemon and Worcestershire, but less mustard. And it also doesn’t indicate specifically what sort of salad you’re supposed to pair it with—just the traditional romaine and  croutons, or something slightly less basic?

So, on a night when I had altogether too much time on my hands, I decided to whip up a batch of each and compare the two to find out which was better. Yes, these are the same post-its I used to demarcate different types of French toast that time I made three kinds; no, I couldn’t find the number one. Deal with it.

Wash romaine; pat dry, and break into bite-size pieces into salad bowl. Immerse one egg into boiling water; turn off heat, and remove egg. Separate egg, using yolk only. [This is called “coddling,” and it’s a good way to prepare an egg for a recipe in which you’re supposed to eat it raw. If you’re not squeamish, you could skip this step altogether and just trust in the egg gods not to make you sick; you can also buy pasteurized eggs in order to avoid performing this whole rigamarole yourself.]

Mix yolk and romaine well. [This is a weird step—why in the world does Nonnie not just have you mix the egg with the rest of the dressing, rather than separately with the romaine? Maybe because she’s trying to emulate the original Caesar, which was tossed tableside like the guac at Rosa Mexicano?] Sprinkle 1/3 cup grated Parmesan cheese over salad, add some croutons, pour dressing over, and mix well.

[Add some croutons, eh? I didn’t have any pre-made ones lying around, so I made the easiest croutons ever out of some cubed bread tossed with olive oil; I put them in the toaster oven and promptly forgot about them, which is why they ended up so dark. Let’s call them “crispy” instead of “slightly burnt,” okay?]

Dressing: In processor, place garlic, onion, anchovies, mustard, Worcestershire, tabasco, lemon juice, vinegar, and pepper. Process for 5 seconds. Turn off, scrape sides, remove stopper from tube, turn motor on, and add oil gradually, processing until all oil is mixed with other ingredients. Turn off machine, scrape sides of bowl (and top), process again for two seconds. Dressing can be stored, covered in refrigerator.

Egg [how much? The whole thing, or just the yolk? These are the mysteries Nonnie never answered; I assumed she wanted us to use one yolk, same as the last recipe, because I couldn’t find another Caesar that included the white. Because, ew]
5 anchovies
Garlic [minced, presumably, though if you’re tossing the whole thing in the food processor it doesn’t really matter]
5 tablespoons oil
5 tablespoons parmesan
1/4 tablespoon red vinegar
1/2 lemon
1 teaspoon Worcestershire
1/4 teaspoon dijon

[There are no instructions beyond this, but I assumed Nonnie wanted us to process the dressing ingredients in the food processor until creamy, as before; nobody likes, like, a chunky Caesar dressing, do they? So I did just that, and then tossed it with plain romaine, just to keep things simple. Ish.] 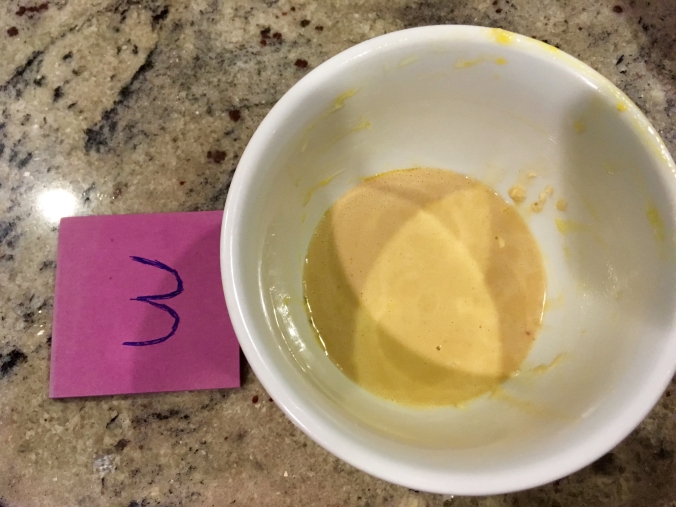 The verdict: Dressing no. 1—labeled, confusingly, no. 2 in the photos above, because I was literally too lazy to tear off a Post-It and write the number “one” instead—was thick, tart, and rich, with a solid anchovy bite.

Dressing no. 2—which is labeled no. 3; now that I’m writing this, I see how dumb my system really was—was thicker still, more prominently garlic-y (probably because there was no green onion to round out the flavor), and more roundly creamy, probably because of all the cheese included directly in the sauce.

So, which was better? My taste-tester and I both agreed on dressing no. 1, which made for a more flavorful, acidic salad that wasn’t muted by cheesy richness. (And because the cheese was separate in the salad itself, we could taste both it and the dressing more cleanly.) The croutons may have also had something to do with its winning status, because who can say no to croutons? Sorry, Uncle David.

That said, both dressings ultimately work if you’re looking for something Caesar-y—and honestly, when aren’t you? You could also always do what I did in the end and mix the two together to get the best of both worlds—and avoid having to store two separate leftover containers.