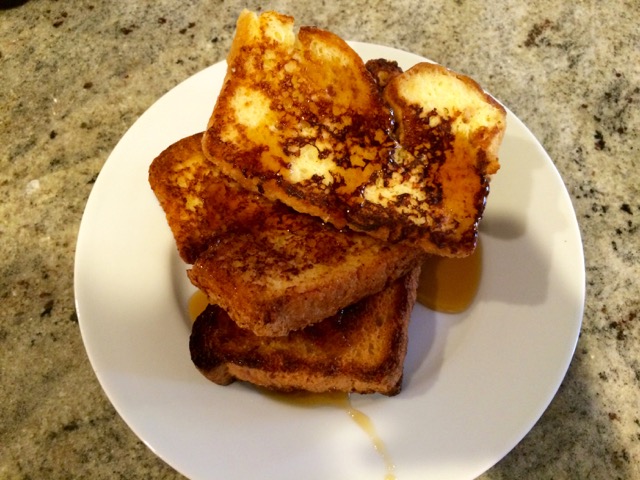 [This week’s post is brought to you by Leslie Mann in The 40-Year-Old Virgin.]

You make French toast, my friends. You make it aaaallll the different ways. 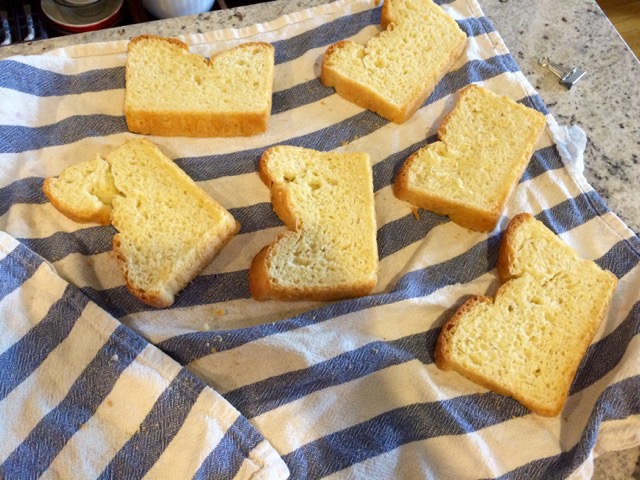 Spoiler alert: It turns out that no matter how you slice it (get it get it get it), French toast is going to get the job done. But there are distinct differences between these three methods, which make toast that’s, respectively, ultra crisp on the outside with a soft interior; uniformly yielding and custardy with an ever-so-slight tang; and ultra-ultra rich, with a nice balance between crunch and give.

One isn’t really objectively better than the others; at some point, it all comes down to personal preference. Of course, you could always just pull a Hillary and make all three. I won’t tell. 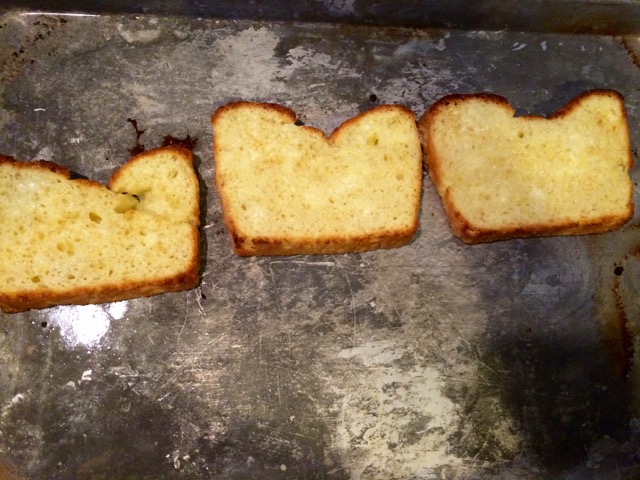 4 eggs, beaten
1 cup milk [I used 1%; it’s forgiving enough that any kind will probably do]
1/2 teaspoon salt
6 slices dry bread [What kind? I used leftover monkey bread, because it was the softest/richest/closest-to-challah stuff I had. While any bread that isn’t too crusty will probably do, I think it’s a good rule of thumb to stick to something thick-sliced (so it doesn’t fall apart in the egg/milk mixture) and made with white flour (because who are you kidding, you’re making French toast not muesli).

Another plus: These richer breads tend to get staler faster, which means you won’t have to let them sit out long before they’re in prime Frenching shape]
1/4 cup butter or margarine, melted

Mix eggs, milk, and salt in a shallow dish . Dip bread in egg mixture and coat thoroughly. Place on a well-greased cookie sheet and drizzle with melted butter. Bake at 500 for 8 minutes, or until lightly browned. Turn and bake 5 minutes longer.

Beat eggs lightly in a shallow bowl. Stir in buttermilk and salt. Dip bread into mixture and allow both sides to soak up liquid. Melt butter over moderate heat and fry bread, turning once to brown on both sides.

4 eggs
1 cup half and half
1/2 teaspoon salt
6 slices dry bread (3/4″ thick)
1 cup butter [Yes, that would be two full sticks if you’re making a full recipe. Spoiler: You definitely, definitely don’t need that much butter] 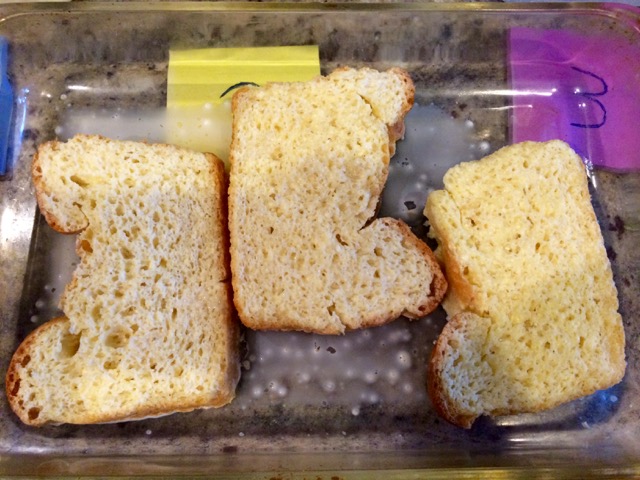 Beat eggs, salt, and half and half together. Place bread in shallow dish and pour egg mixture over bread. Allow bread to soak in liquid for about 15 minutes. [It’s plenty of time to get the bread real soggy — see how much liquid has been absorbed in the picture above? Just be careful when you’re transporting it to the skillet, or your slices just might fall apart.]

Melt butter in skillet and brown bread on both sides over moderate heat. [Try not to have a heart attack simply by looking at how much butter that is. 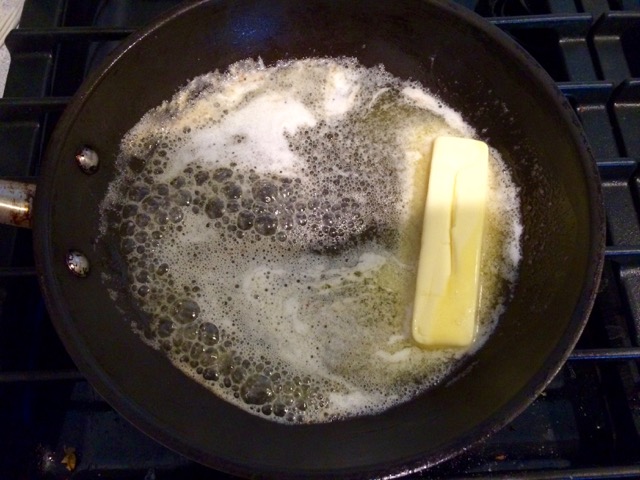 Drain and place on cookie sheet in 350 oven for about 10 minutes, or until bread slices are puffy.

The verdict: The baked French toast was by far the crunchiest, with a deeply burnished exterior that bordered on burnt — thanks both to its long vacation in a super-hot oven and its relatively brief soaking time. The buttermilk version had less textural contrast than the others, which made it more like the French toast I’m used to — though I was disappointed to find that it didn’t taste tangy enough to justify an extra trip to the store. (Because who just, like, has buttermilk?)

My official taste-tester declared “fluffy” the fairest toast of them all, calling out its balance — crisp outside, nearly liquid inside. There are just a few problems with this assessment.

One: Fluffy is by far the fussiest and most labor-intensive of Nonnie’s three French toasts. Two: The combination of half-and-half and a metric ton of butter make it crazy rich, and while yes, we’re not making health food here, I feel like you should be able to eat more than one piece of French toast without seeing your whole life flash before your eyes.

Perhaps, then, the solution’s the obvious one: Combine elements of each recipe to get the Ultron French toast you deserve. Use Toast 1’s regular milk (or Toast 2’s buttermilk, if you’re some kind of farmer and happen to have it lying around), Toast 3’s long soak, Toast 2’s moderate amount of butter, and maybe a modest spin in the oven to ensure a crisp shell encasing custardy goodness.

Of course, you’ll probably want to make the other three kinds as well. Just for comparison’s sake. Again: My lips are sealed.