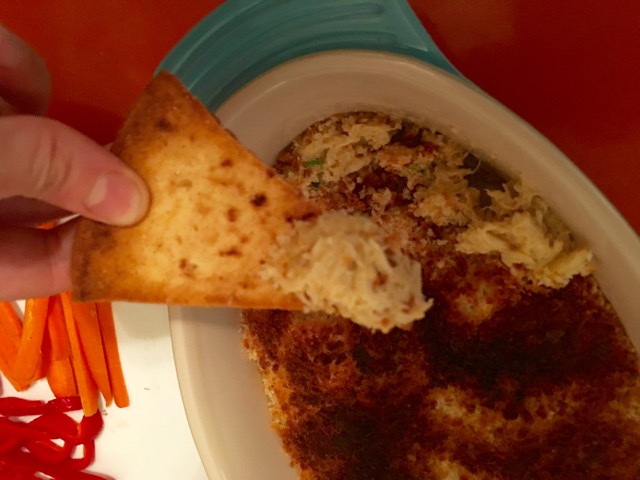 If you’re like me, then These Troubled Times have you craving two things: companionship (because misery loves company, especially when we’re all bitching about the same things), and creamy, bubbling, comforting food made to be scooped up by crisp simple carbohydrates.

Enter Nonnie’s deviled crab dip, a delightfully retro (take a drink every time I call one of her recipes that!) appetizer that cries out to be served at a party—birthday celebration, book club meeting, underground feminist resistance conclave, Mother’s Day brunch,  what have you. It’s warm; it’s inviting; it seems somehow fancier than hummus or even artichoke dip (which I always find fancy, even when it’s being served at, like, the Buffalo Wild Wings above the LIRR), even though making it is about as complicated as buying a pound of cooked crab meat. Which isn’t complicated so much as it is wildly expensive. I mean, damn, what is crab made of, sea gold? 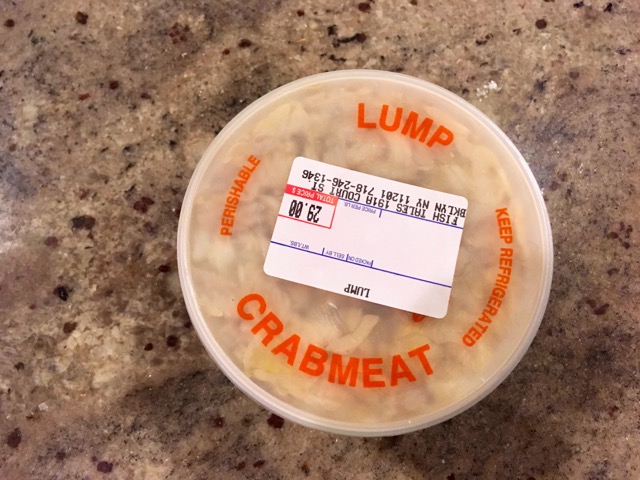 Sure, bringing it along to your next shindig might raise some eyebrows—because 1) like, who eats crab dip anymore? and 2) you’ll need to trouble your host for some oven space, since the dish may have cooled in transit and you’ll also want to run it under the broiler for five or so minutes in order to attain maximum bubbliness. (Perhaps this means that crab dip actually isn’t the best option for your next underground feminist resistance conclave, since the meeting’s undisclosed location may or may not have a working oven. If that’s the case: you can never go wrong with cookies.)

Once the naysayers tuck in, though, chances are their nays will be nothing but a distant, negative memory. Come, friends: let’s eat the crab dip. And as we do that, let’s figure out how the hell we’re going to get through the next four years. 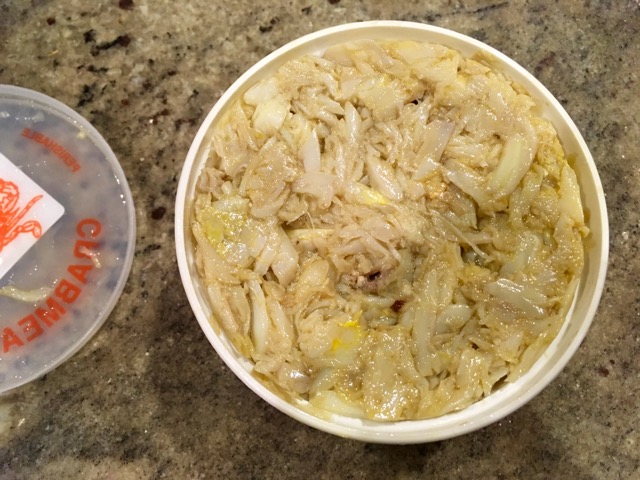 Deviled Crab [History lesson! What, exactly, makes a seemingly innocent food “deviled”? It all has to do with the amount of seasoning, in this case “more than most other recipes that originated in the bland, gelatin-encased 1960s]

1 lb. cooked crab meat [You could probably use canned; in all likelihood, that’s what Nonnie did. But I managed to catch my fancy neighborhood fish store during the approximately seven minutes each day they’re actually open, and snagged the last container of fresh crab meat they had instead. I’m a hero, is what I’m saying]
2 tablespoons butter
1 tablespoon flour
1 cup half and half
1 teaspoon salt
1-2 teaspoons lemon juice
1/2 teaspoon dry mustard
1/8 teaspoon cayenne pepper
1 teaspoon Worcestershire sauce
1 ounce dry sherry
Bread crumbs [I used panko, despite this being a product that my grandmother may or may not have ever heard of] 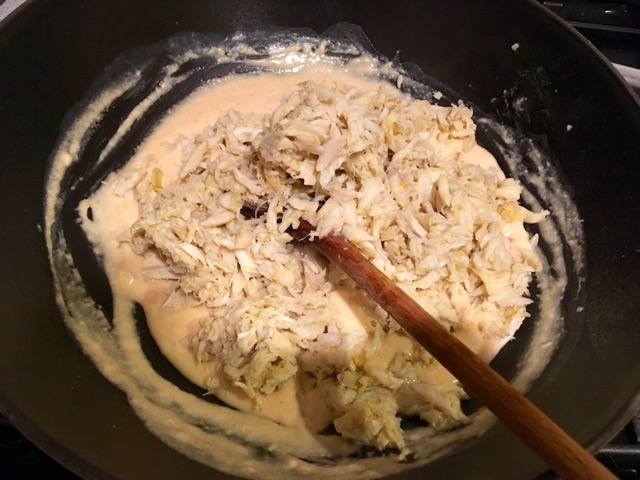 Flake crab. Heat 1 tablespoon butter in skillet over low heat. Add flour and stir until flour begins to turn golden. Add cream, stir, and cook for 5 minutes. [In other words: all you’re doing is making a bechamel, a process that in basically all cases leads to something delicious.]

Add other ingredients, except crab, and stir and cook for another five minutes. [If you taste it right now, it’ll seem majorly salty. Don’t worry—it evens out once you add the crab, though I still might knock down the amount of salt next time.] Add crab, stir and cook for another five minutes. Spoon mixture into a buttered baking dish (or individual ramekins). [I went with a three-quart dish, which was just about the perfect size.] Sprinkle with bread crumbs, dot with remaining one tablespoon butter, and broil until top is brown and bubbly. [For me, this took about six minutes in a borrowed oven.] 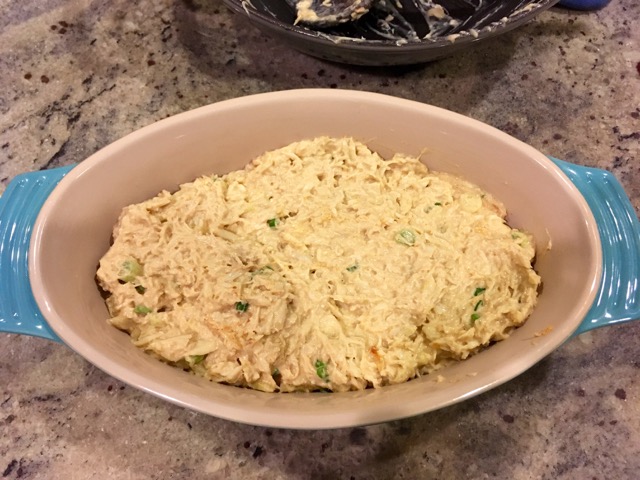 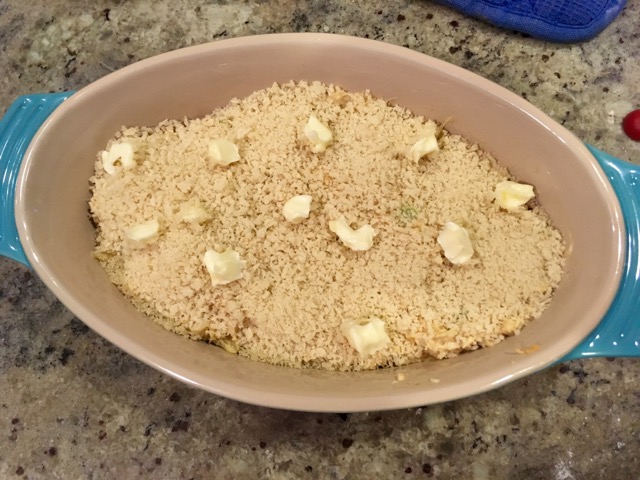 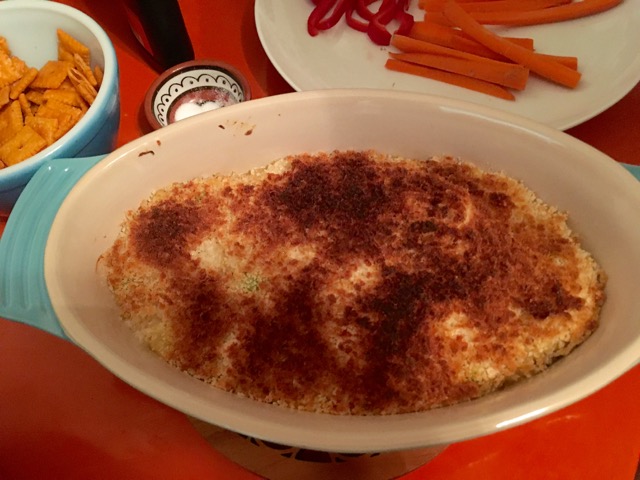 The verdict: Well, I can tell you that it certainly put those Cheez-its to shame. Actually, that’s a lie: Cheez-its are the perfect food, and I shan’t hear otherwise. But for something that wasn’t processed to perfection, the dip came out pretty damn well… at least, after I doctored it a bit by adding some finely chopped scallions and upping the spices. (Half a tablespoon of dried mustard and a teaspoon of cayenne, which gave the dip a real kick; it’s rich enough that I think it could handle that extra spice, but I understand if you’d rather keep it dialed back.]

An unexpected bonus? The dip is good as a dip. But as a next-day topping for leftover latkes—creating a dish I like to call The Jew’s Dilemma? It might be even better. 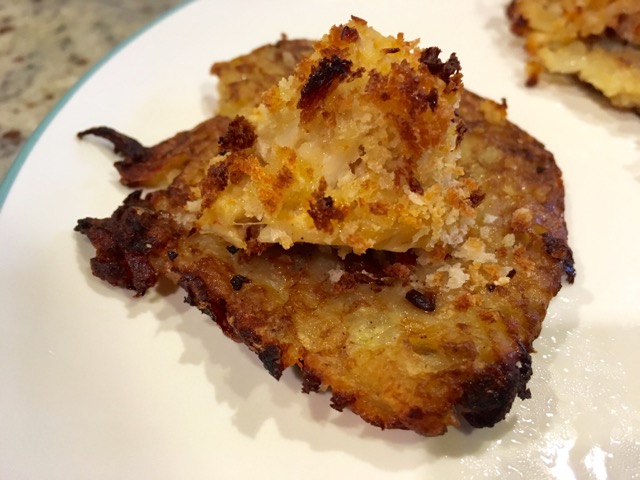