What business did my grandmother — a Pittsburgh-born Jew who spent most of her adult life in sunny Los Angeles — have making moussaka, a Balkan/Mediterranean comfort classic that’s predicated on mixing milk and meat and is absolutely the last thing you’d want to eat before heading out for a day at the beach?

Obviously, that’s a rhetorical question. (Although maybe I should take this opportunity to mention that one of her grandfathers was Turkish; the remnants of his Sephardic blood are why my mom always said it was okay for us to eat peanut butter on Passover.)

Think about it, though, and you’ll see that moussaka might just hit more midcentury flashpoints than any other dish. It’s (ding!) a casserole that’s (ding!) incredibly unhealthy and (ding!) dressed in appealing shades of brown and white, but also (ding!) just exotic-seeming enough to impress an overly educated housewife — not to mention (ding!) time-consuming enough to keep her too busy to worry about The Problem That Has No Name as she’s cooking it for her absent husband.

I guess what I’m saying is that moussaka is a tool of the patriarchy. (Huh — not where I expected to end up when I started this post.)

True as that may be, however, I have to admit that it’s as tasty as it is hideous… provided you only eat it when you know bathing suit season is still far, far away.

1-2 lb. ground beef [Using my fooproof “split the difference” method, I went with a pound and a half. I’d be interested in trying it with lamb instead next time; for that, I’d probably use the smaller amount]
1 medium eggplant
1/2 to 1 cup dry bread crumbs
1/2 teaspoon salt
2 cups salad oil
2 medium onions, chopped
1 8 oz. can tomato sauce
1/2 teaspoon oregano
1/2 teaspoon cinnamon
1 garlic clove, minced
1 teaspoon salt
1/2 teaspoon pepper
3 tablespoons butter
3 tablespoons flour
1 1/3 cups milk [You’ll need a kind with at least some fat in it; otherwise, getting it to become a bechamel is going to be tough slash impossible]
2 eggs, beaten [You know, because bechamel isn’t rich enough on its own]
3/4 cup grated parmesan

Pare eggplant [i.e. cut off each end and peel it] and slice 1/2 inch thick. Sprinkle with 1/2 teaspoon salt and place on paper towels for at least 30 minutes so water will drain. Pat dry and coat with breadcrumbs. Heat 2 cups salad oil and brown eggplant. Drain on paper towels.

[Actually, don’t do that at all! Getting the breadcrumbs to stick is nigh on impossible without first coating the eggplant with something else. The eggplant slice on the left was dipped into the breadcrumbs dry; unsurprisingly, they all fell off once it hit the oil, giving my kitchen a delightful “scorched bread” smell.

So I ditched Nonnie’s instructions and started dipping the eggplant slices into a simple egg wash before dousing them in breadcrumbs, which got me slices like the one you see on the right. Still not perfect — and pretty tough to fry to a nice golden brown without scorching the crumbs — but definitely an improvement.]

Pour off all fat except 1-2 tablespoons and sauté meat, onions, and garlic until meat is lightly browned. Pour off fat [as best you can — it’ll probably be easier if you’ve got a smaller amount of meat]. Add tomato sauce, oregano, cinnamon, 1 teaspoon salt, pepper and stir. [It will look like sloppy joe filling. Try to see that as a positive.]

In another saucepan, melt butter, blend in flour (make a roux) and 1/4 teaspoon salt. [Make sure to cook the roux for a good few minutes to eliminate any raw flour taste.] Add milk, a small amount at a time, blending well after each addition. Cook and stir until mixture thickens.

[Making a bechamel is like falling asleep — it happens slowly, then all at once. Don’t worry if it seems like you’re ruining the sauce every time you add more milk — so long as there’s fat to work with, it’ll thicken eventually, until it can coat a spoon like so.] 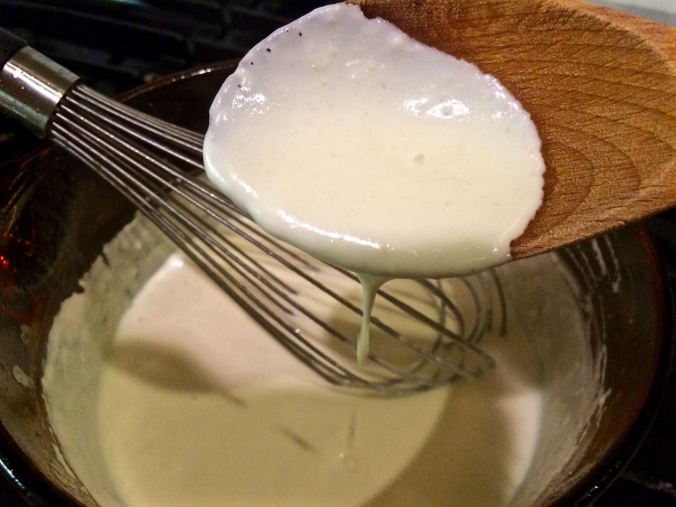 Remove from heat and cool for 2-3 minutes. Gradually add a little sauce at a time to beaten eggs to blend.

Reserve 1/2 cup of meat sauce. Grease a 7″x11″ casserole. Reserve 1/2 cup meat sauce. Arrange alternate layers of eggplant, meat, and cheese. [By this, I’m pretty sure Nonnie meant “cheese sauce” — which means she also forgot to tell us to add the parm to the bechamel. So: Do that after you’ve added the sauce to the eggs.] 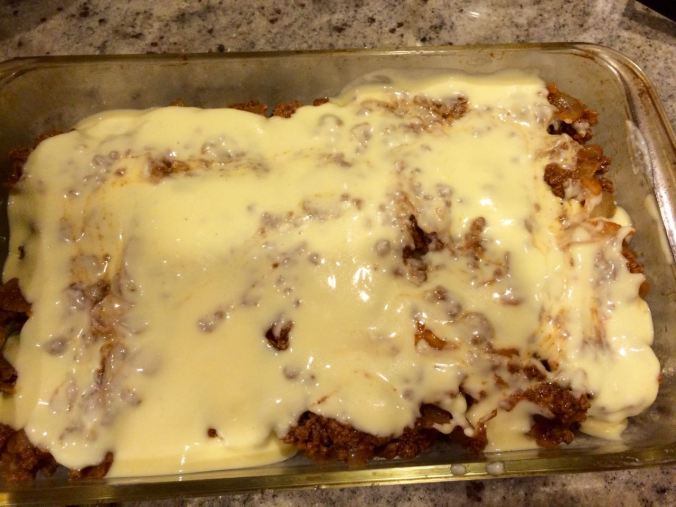 Pour reserved 1/2 cup of meat sauce over top. [It’ll be a tiiight squeeze, but all the layers should just barely fit.] Bake uncovered in 325 oven for 1 hour or until lightly browned.

Remove from oven and let stand for 10 minutes before serving. [Don’t skip this step, because if you do, your “slices” will be a soupy mess.]

The verdict: This recipe is far from perfect. Frying the eggplant is difficult and messy; I’d rather get similar results by giving the salted slices a light coating of oil, then sticking them in a 350° oven for about five minutes per side. And there’s really no need for the breadcrumbs, since they end up getting lost in the gloopiness of the final dish; I’d leave them off entirely next time.

You know what, though? If you’re in the mood for something rich and savory and defiantly bad for you, this stuff really does hit the spot. And I can say that with authority, because did you hear that I’m 1/16th Turkish?

Oh, but for the love of God: Serve it with something green.