Sweet potatoes don’t make an appearance at my family’s Thanksgiving table — and haven’t for as far back as I can remember. (Although the one year my mom hosted, they were present — and topped with mini marshmallows to boot.)

Instead, the buffet’s “orange food” requirement is filled by my Aunt Maureen’s specialty, which is called either carrot pudding or carrot soufflé depending on who’s speaking. It’s soft and rich and decadent, unabashedly sweet but still substantial enough to fit in on a plate filled with turkey and stuffing. It’s certainly not an everyday food, unless you’re cultivating gout — but for the biggest eating day of the year, it works perfectly.

This… is not that carrot pudding. 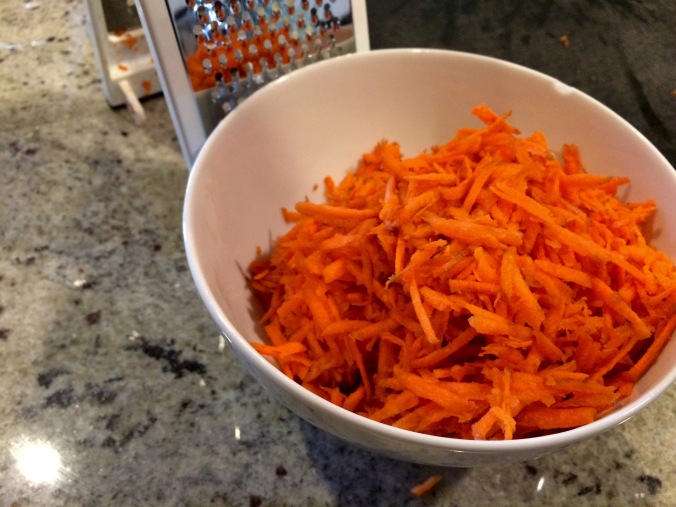 In fact, it’s not really a pudding at all. Much like Nonnie’s tuna casserole — which is actually more like a dip — her carrot pudding is seriously mislabeled. Despite the name, it’s pretty much just carrot cake — flat-ish and just barely sweet and more carrot than cake, but unmistakably cake nonetheless.

This isn’t a bad thing; discovering cake in unexpected places is one of life’s greatest joys. Be warned, though — if, say, you were hoping to bring a pudding to a friend’s Fakesgiving, you might be a bit disappointed with the results here.

Though the batter certainly isn’t anything to sneeze at.

Cream butter and sugar. Add eggs and mix well. Sift flour with other dry ingredients. Add dry ingredients and grated carrots to egg mixture. Mix well. Pour into greased 9″ square baking pan and bake in 350 oven for 45 minutes, or until it tests done.  [Which, for me, was more like 35 minutes in. Underbaking even more might yield something closer to pudding.]

Can use small ring mold for baking. Unmold on platter, and place peas in center. [I swear this is what the recipe says; yeah, I don’t understand it either. “The expression is ‘like peas and carrot cake,’ right?”] If using square pan, cut into squares to serve. 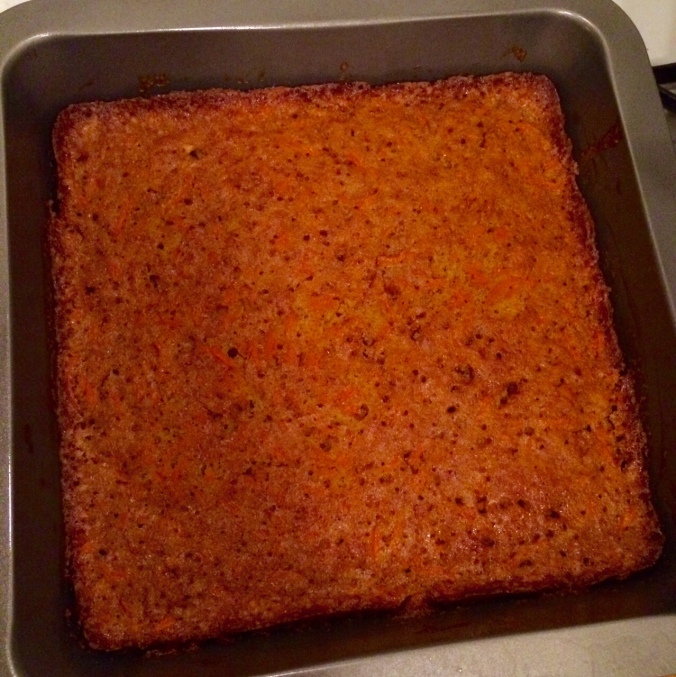 The verdict: Remember that awesome apple cake from a few weeks ago? This is sort of the vegetal equivalent — a relatively small volume of rich, buttery batter that just barely binds carrots together, yielding a moist, subtly spiced cake that’s a lot less sweet than the full cup of brown sugar inside would imply. It’s certainly not a showstopper, but it gets the job done.

The cake worked fine as a light dessert, but I have it on good authority that it was even better the next day when paired with yogurt for breakfast — which makes me think that this batter might be its best self when divided and baked in a muffin tin. You could probably even health it up with whole wheat flour and nuts and a reduced amount of sugar, if you’re into that sort of thing — although that treatment would take it even further from pudding-ville.

Just promise you won’t serve it with peas. Even a healthy-ish cake doesn’t deserve that.