After two months of experimenting with Nonnie’s busted binder of recipes, I’ve discovered two things to be true.

The first: Nonnie’s savory recipes are hit or miss. For every deliciously browned, crispy-on-the-outside-soft-on-the-inside oven-roasted potato, there’s a nasty onion parade or questionable amalgamation of boxed mac and cheese, tomatoes, and canned tuna. (Not that we didn’t eat the whole pan of the latter anyway.)

The second: When it comes to pastries, though, Nonnie knew her shit.

Unlike most American Jews, I didn’t grow up on High Holiday apple cake. As a result, it’s something I’m sort of agnostic about — and it doesn’t help that generally speaking, I am firmly on Team Pie. A buttery, flaky crust wrapped around a gloriously gooey filling — fruit-forward, texturally complex, never masked in stiff, one-dimensionally sweet  supermarket icing? Yeah, I’ll take that over cake any day.

However! As it turns out, Nonnie’s apple cake is more pie-esque than cake-ian, a marvelous mess of softly yielding apple chunks just barely held together by a tender crumb base that only gets more lusciously fruit-saturated as it sits. It reminded me of Smitten Kitchen’s rhubarb snacking cake and purple plum torte — a high compliment indeed, since both times I’ve made each of those recipes, they were among the most delicious things that’ve ever emerged from my oven. (Forgive me, pie.)

Nonnie’s recipe also gets points for versatility. Even though it calls for high amounts of butter, sugar, and eggs, the final product turns out to be neither too rich nor too sweet; you can have a slice for dessert, of course, but you can also eat a big old hunk for breakfast without feeling like a disgusting monster.

That may not sound like the most ringing of endorsements, but trust me: This stuff is good. And as much as it hurts my Team Pie soul to say, it’s also whole lot easier to throw together than one of these. 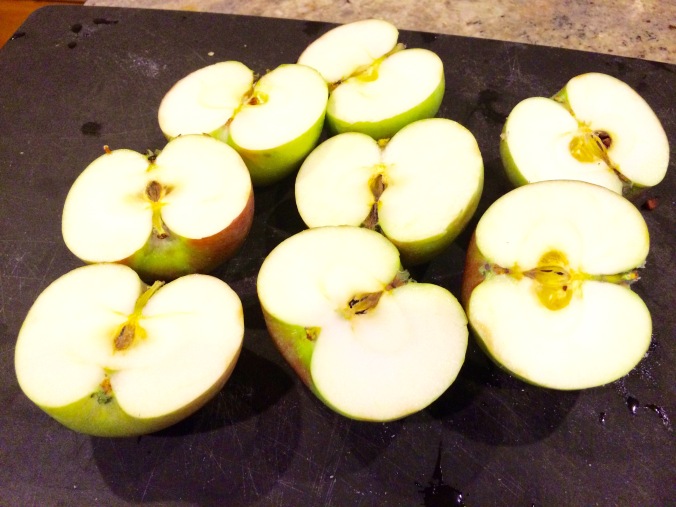 4 eggs [Yes, four, according to a hand-written addendum from Nonnie. Originally, the recipe apparently called for just two. The adjusted amount might sound like a lot, but I suspect they contribute to the cake’s consistency, which grows increasingly pudding-esque days after it’s baked]
1/2 cup brown sugar [cut from one cup in the original recipe]
1 cup sugar [also an altered amount — the original had 2/3 of a cup]
1/4 cup melted butter or margarine
4 green apples, coarsely chopped [I used the ones that came in last week’s CSA, which were green-ish Macouns; I’d like to try again with a tarter apple, like Granny Smith]
1 tablespoon lemon juice
1 tablespoon vanilla
1 1/2 cup sifted flour
1 teaspoon baking powder
1/2 teaspoon salt
1 cup chopped walnuts
Cinnamon

Beat eggs until light. Add sugars, butter, and vanilla, and beat until smooth. Sift dry ingredients together and blend into egg mixture. [If you’re using a janky DIY sifter like me, try not to let your strainer fall directly into the batter — although it’ll turn out not to be as big a deal as you thought it would.]

The verdict: What, weren’t you listening? The cake was a great success; I’d make it even if the arbitrary constraints of my food blog didn’t demand me to. The only change I’d suggest is in the cooking time; mine took about 25 extra minutes to turn out a clean tester.

You could also try a higher oven temperature, I suppose — but I wouldn’t want to risk drying it out. Just look at what happens when you show a little patience, not only cooking the cake longer at a lower temperature, but also waiting to eat a slice until Day 2, when the apples’ juices have fully saturated the pastry around them.

Look at it. Maybe Nonnie’ll make a cake convert of me yet.

One thought on “Apple Cake”