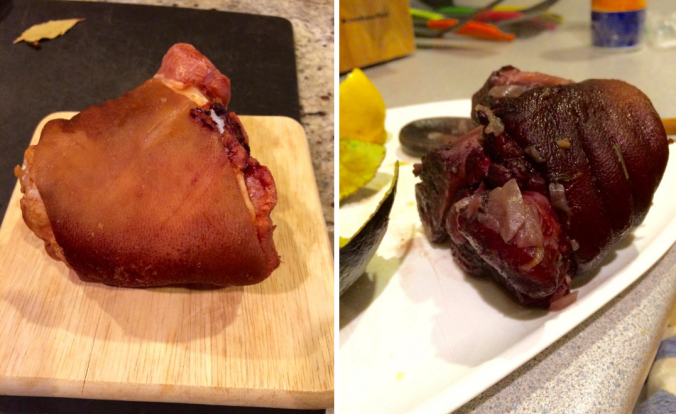 Guys, I’m having an existential crisis. Do I… like ham?

I didn’t eat pig growing up, but not for the reason you might think. Though my mom never cooked pork or shellfish, that was more a consequence of personal taste than adherence to Jewish law; while our freezer was stocked with turkey bacon rather than the real stuff, we also mixed meat and milk like it was our job. (Mom’s roast chicken wasn’t complete without a healthy serving of tangy, yogurt-spiked mashed potatoes; sour cream-slathered latkes went hand-in-hand with Hanukkah brisket; you get the sacrilegious picture.)

No, my aversion to pig meat had its origins somewhere else entirely: my elementary school best friend, who for whatever reason was obsessed with pigs. (One of my other friends was so into cheese that we started an exclusive club called The Cheeseheads, which forced all its members to abide by an elaborate code of dairy-inspired conduct. Kids are weird.)

Anyway: Sometime around kindergarten, we made a solemn pledge that we’d never eat pork. For the next 14 years, I more or less kept that promise. (I also did end up keeping kosher for a brief period in high school and college — but that’s a story for another day.) 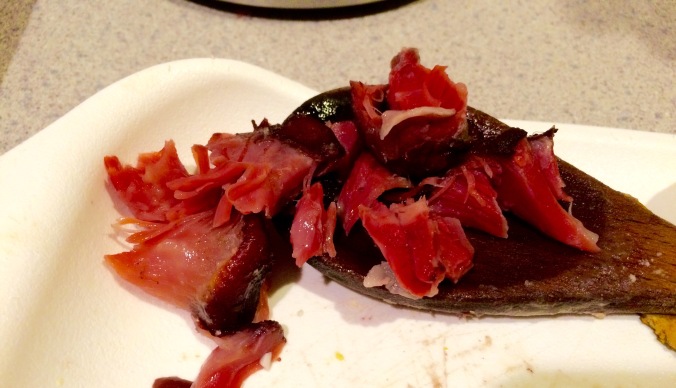 Before I took the kosher plunge, I had convinced myself that I didn’t even really like pig. Afterwards, of course, I discovered that this was patently false. But as much as I actively enjoy bacon, pulled pork, real-deal bolognese, and the full cornucopia of fancy-sounding cured meats, I’ve never really been able to stomach the idea of eating ham — either in lunch meat form or the brown-sugar-glazed, Christmas-style stuff.

Why? In part it’s because, as we’ve already established, I’m a snob, and the word “ham” just sounds sort of gross and déclassé. (Unless it’s coming from Angie Jordan.) It’s also the color — fleshy pink, an unappetizing bridge between the white of chicken and the deep browns and reds of a great piece of beef. 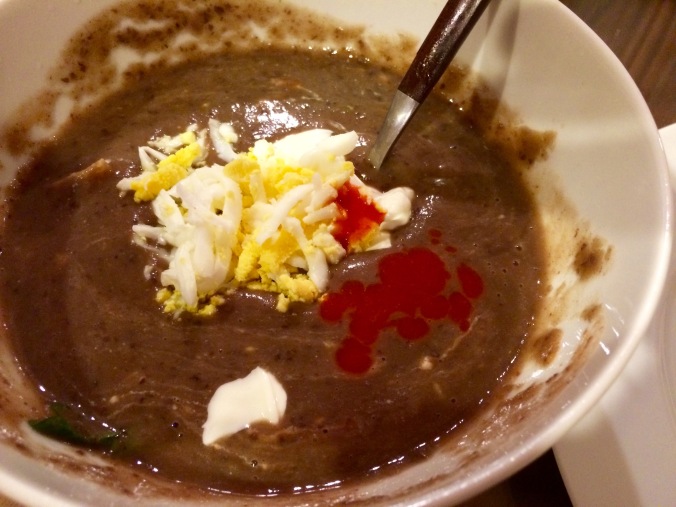 Here’s the thing, though: Nonnie’s black bean soup calls for beans, aromatics, spices, and water, all simmered together with a ham bone for the better part of three hours. When it’s done, you’re left with a charcoal-colored liquid that makes for a light yet hearty autumn supper… and a bone surrounded by succulent, smoky, impossibly juicy pig meat.

Reader, I ate it. And it was good.

But you’ll still never catch me ordering a ham and cheese sandwich… unless it’s, say, served in a French restaurant and called a croque monsieur. Told you I was a snob. 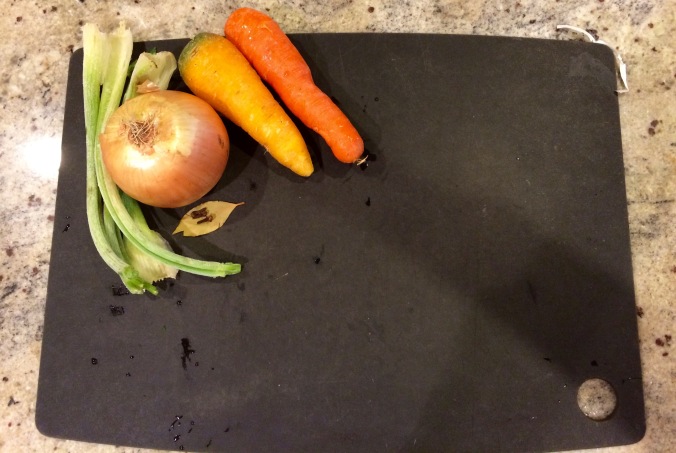 1 cup dried black beans
6 cups water
1 ham bone [The recipe originally called for a bone with meat, though Nonnie later crossed out the second part. I have no idea why — if you want to bulk up your soup with delectable pork morsels, and I think you do, go for a meaty bone. Bonus: It’s the cheapest thing you’ll ever buy at a nice butcher shop.]
1 finely chopped onion
2 carrots, sliced
2 stalks celery, sliced
3 whole cloves
1 bay leaf [Rant alert: What is the point of bay leaves? Do they contribute anything, or just float around uselessly until you pluck them out of whatever you’re cooking and throw them away? Am I just using bad, aged bay leaves that have lost their flavor? Please advise]
1 teaspoon dry mustard
1/4 teaspoon thyme
Dash of mace [or nutmeg, if you don’t want to buy a whole new spice; this stuff’s expensive]
2 teaspoons Worchestershire sauce
Parsley [Nonnie didn’t give a precise amount, so I went with the leaves from one big stalk]
1/4 cup dry sherry
1 hard-boiled egg
Lemon slices 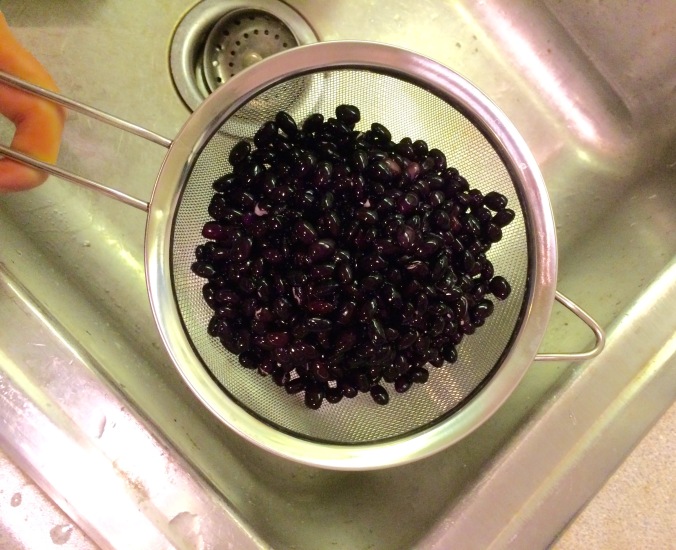 Soak beans in water overnight. Add all other ingredients, except sherry, egg, and lemon slices, to beans and water. Bring to a boil; cover, reduce heat, and simmer 2.5 to 3 hours or until beans are soft. [For me, that was about two and a half.] 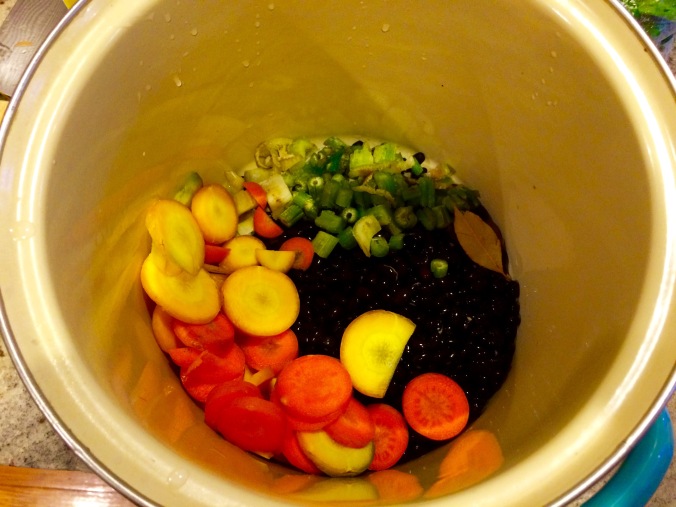 Skim off fat [if there is any; mine stayed pretty concentrated on the bone itself]. Pour soup into blender or food processor and blend until smooth. [Or use an immersion blender, if you’ve got one; doing so makes you a thousand percent less likely to splash hot soup all over your counter/yourself. Our Counters, Ourselves, coming June 2016 from Small Batch Press. I digress.]

Return to pot and re-heat on low heat. Stir in sherry just before serving. [Don’t actually do this. More on that later.] Garnish with grated egg and lemon slices. [And the bits of ham you’ve removed from the bone with your bare hands, like a ravenous animal.] 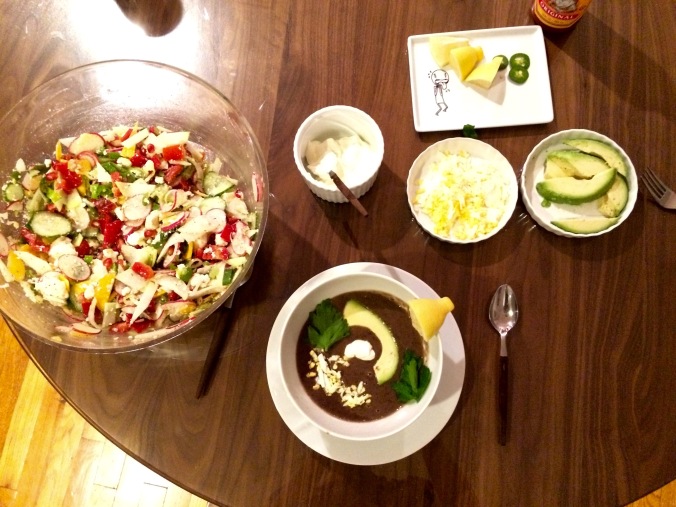 The verdict: Pre-sherry, the soup was appealingly earthy but a little dull — probably because this recipe, like several of Nonnie’s, didn’t include any salt. Post-sherry, eating it felt sort of like getting hit in the face with your batty great-aunt’s booze breath at the end of Thanksgiving dinner. It’s a lot of sherry, is what I’m saying, especially since the alcohol gets stirred in at the end and doesn’t have a chance to cook off.

But salting the soup, squeezing in some lemon, and garnishing it with Nonnie’s recommended trimmings — plus avocado slices, a dollop of sour cream, the aforementioned ham, and more than a few shakes of this magical elixir — left it much improved, even if the sherry taste never really went away. I’d make the soup again, but leave out the booze entirely — and maybe up the ham quotient considerably. Nonnie, you’ve created a monster.

P.S. We ate it with the colorful jumble pictured above left, a big mess of thinly sliced CSA goodies inspired by Smitten Kitchen’s go-to chopped salad. This one featured kohlrabi, carrots, radishes, scallions, red peppers, pomegranate seeds, feta, and an olive oil/lemon/sumac dressing; I give it two enthusiastic, ham-covered thumbs up. 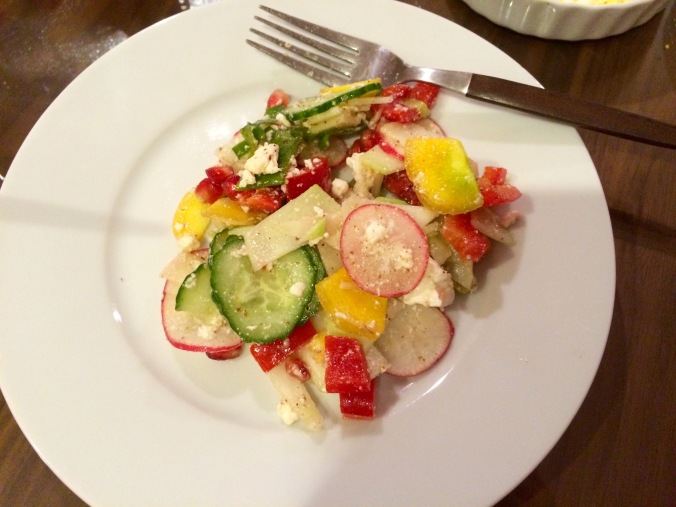