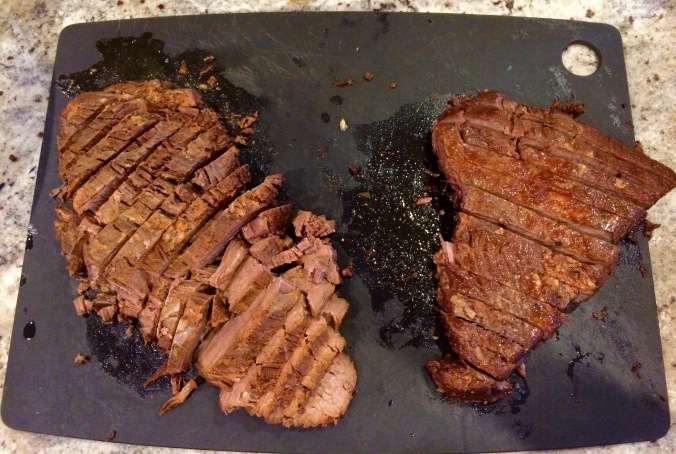 Of course, she was far from the only grandmother to mix ketchup with powdered soup and call it a marinade. Her recipe is a variation on the very same method you’ll find in all corners of the American Semitic universe, literally from sea (the Jewish Federation of Los Angeles’ online Hanukkah guide) to shining sea (this Massachusetts synagogue’s brisket bake-off).

Some use Heinz chili sauce, some go for cranberry sauce, some substitute ginger ale or Coca Cola (really). Regardless, the general principle remains the same: Take sugary food-like substance, add a package of Lipton’s, stir together, and dump on meat. (Everyone’s bubbe claims onion soup mix as her own special secret ingredient. Everyone’s bubbe is lying.) It’s a formula so foolproof that even the goyim have caught on, though not all of them realize that the dish sounds a lot less delicious when you call it pot roast instead of brisket.

So yeah: The recipe is clearly tried and true, not only by my family but also by our brethren across the nation. It’s what we ate every Hanukkah I can remember; it’s what I secretly prefer to the smoked Texas-style stuff that became trendier than cupcakes in the late aughts, an objectively more impressive culinary achievement that just can’t scratch the same nostalgic sweet spot.

That said, the first time I ever attempted to make my own holiday brisket, I couldn’t quite bring myself to use Nonnie’s recipe.

Why? Because smearing fatty meat with a mixture of ketchup, onion soup mix, and red wine is gross, guys. I’d long ago traded American cheese for Cabot clothbound cheddar, electric red Popsicles for People’s Pops, pepperoni for soppressata. My salt came from the sea. I was better than Heinz and Lipton’s. 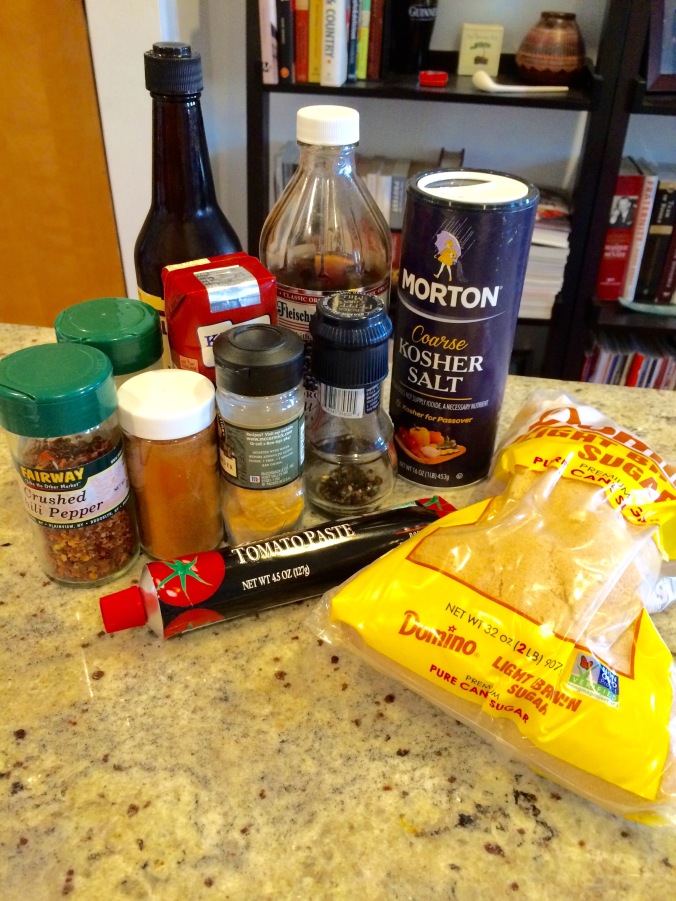 So I turned instead to the brisket in Deb Perelman‘s then-just-released Smitten Kitchen Cookbook. It was, as Deb herself explained in the recipe’s headnotes, a dish modeled after the Jewish American classic, but made with stuff the 21st century cook would more easily recognize as food (and, it must be noted, a whole lot more ingredients than the original). Tomato paste, vinegar, sugar, and salt stood in for ketchup; onion powder, garlic powder, salt, and more salt took the place of the powdered soup. What’s more, it came with a dash of spice that Nonnie’s recipe decidedly lacks (though that might change if you used chili sauce instead of ketchup).

And you know what? It was pretty goddamn delicious, in taste and texture a nearly dead ringer for the brisket I remembered. But I couldn’t help wondering if it would really beat out Nonnie’s recipe in a head-to-head competition.

Which is why this Hanukkah, I decided to find out. 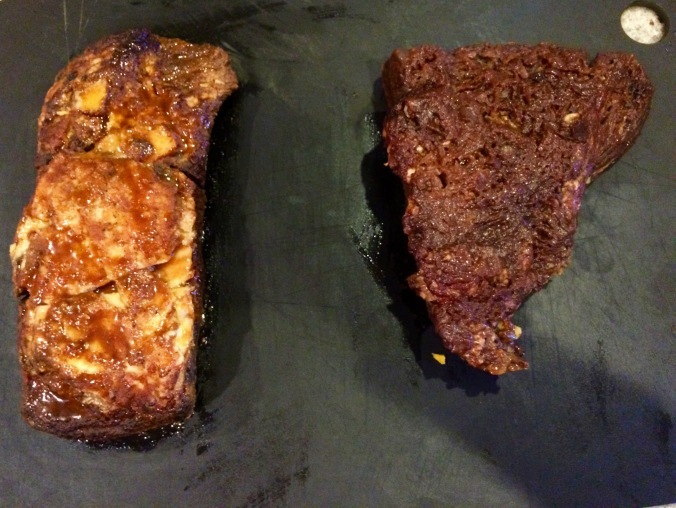 First cut or flat cut of brisket [Nonnie doesn’t specify how big a piece, although my mom told me she usually goes for a five-pounder; I halved the recipe, since my brisket weighed around 4.5 pounds before the butcher cut it in half]
1 cup red wine
1 cup ketchup [My family is from Pittsburgh; use Heinz or GTFO]
1 package Lipton’s onion soup mix
1-2 cloves garlic
Salt and pepper

Make incisions in brisket and stick pieces of garlic in meat. Sprinkle with salt and pepper. Place in a dutch oven. [Or, if the only dutch oven in your life is the one you found on Google Images and have deceptively used as the header for your nascent food blog, put it in a baking dish you’ll cover tightly in aluminum foil.]

Mix remaining ingredients together and pour over meat. Cover and bake in 350° oven. Cooking time depends on size of brisket; allow one hour per pound. [Mine was in there for about 2.5 hours, but I wasn’t satisfied with its tenderness, so I stuck it in for an extra 30 minutes.]

You can add sliced carrots and small potatoes to meat about an hour before serving. [You can… but I didn’t, because I planned a Hanukkah spread that already included a carrot salad and latkes, and there’s a limit to how many potatoes and carrots one menu can feature. Even a Jewish menu.] Remove meat from pot and allow to cool while vegetables are cooking. [Wait, what? I guess she figures they’ll need more than an hour in the oven.] 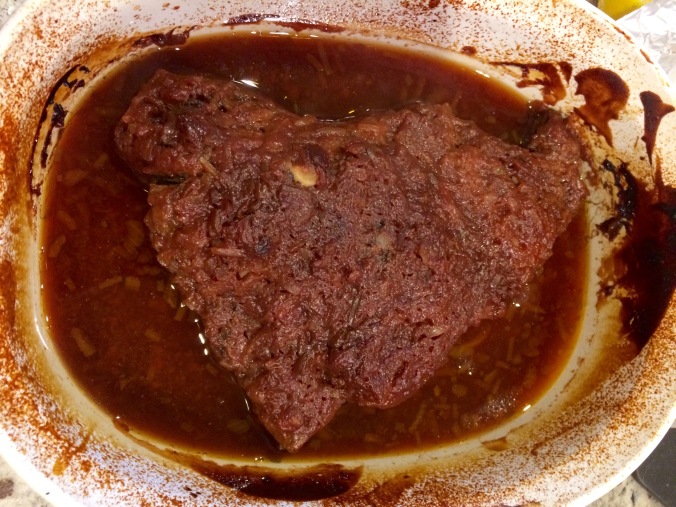 Season both sides of brisket on both sides with salt and pepper. Whisk together remaining ingredients. Place seasoned brisket in slow cooker — fat cap up to prevent it from drying out — and pour sauce over it.

Set to cook for 10 hours on “low” setting, then carefully remove brisket from slow cooker and place in baking dish. (It’ll be hot and fall-apart tender, which makes this step a little tricky — using two large spatulas to lift the meat from either side helped me keep mine in one piece. Know that it’s a lot easier to move around once it’s cold.) Pour sauce over top, cover, and place in fridge overnight.

The next day, remove solidified fat with slotted spoon. (I actually did this with both pieces of brisket, although Nonnie’s recipe didn’t technically call for it; braised meats like brisket always taste better on the second day.) Carefully transfer brisket to cutting board, and cut into thick slices against the grain. Return to baking dish. Spoon sauce over meat, cover dish, and reheat in a 300° oven until the sauce is bubbling. Eat, preferably with latkes. 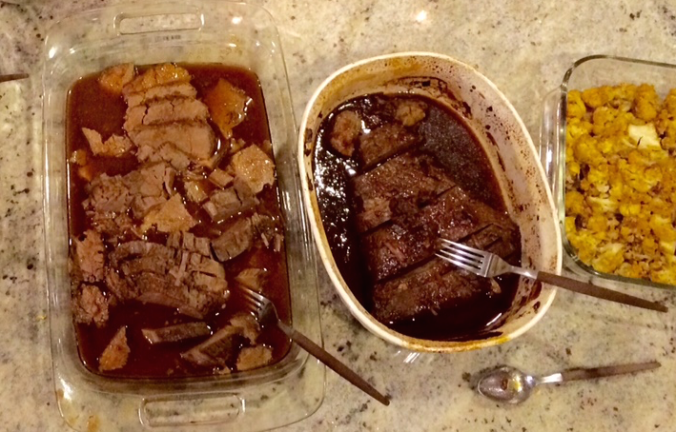 The verdict: Deb’s brisket is on the left; Nonnie’s is on the right. As you can see, the long slow-cooker bath made the Smitten Kitchen version fall apart the moment it was sliced. Nonnie’s was a bit sturdier, to the point where I was worried it’d taste dry; fortunately, a healthy coating of sauce helped prevent that from being an issue.

Speaking of that sauce: As you can tell from the photo, Deb’s brisket made a gravy that was thinner and redder. It was also tangier and more complexly spiced, with a nice bite from the vinegar and Worcestershire. Nonnie’s was darker, thicker — thank you, corn syrup — richer and, most of all, saltier, though not unpleasantly so. It tasted sharp and unforgivably winey before the braise, but mellowed considerably during its three hour stay in my oven.

Both came out beautifully; both won adoration and praise. But none of our guests had trouble telling which brisket was which, even though, we made a point of making them guess. The general verdict, as delivered by my MOT friend Ben: “The one on the left is a crowd-pleaser, one you could comfortably serve to goys. But the one on the right is the one I grew up with.”

And, for the record, even the dinner’s token gentile agreed. “I liked Deb’s better on first taste,” he said. “But Nonnie’s was ultimately more satisfying.”

Blame the salt; blame the richer color; blame the more unctuous sauce; blame nostalgia, which is always the real secret ingredient. Whatever the reasons, Nonnie ended up coming out on top — an outcome even Deb herself might not be able to argue with.

Why? Because she confesses in her cookbook that her brisket is actually a reverse-engineered version of the one her own mother-in-law makes — a  top-secret recipe that includes “a bottle of None of Your Business, a few spoonfuls of Also Not Going To Tell You, and a packet of So Many Questions Today!”

Wanna bet what’s in that bottle and that packet? 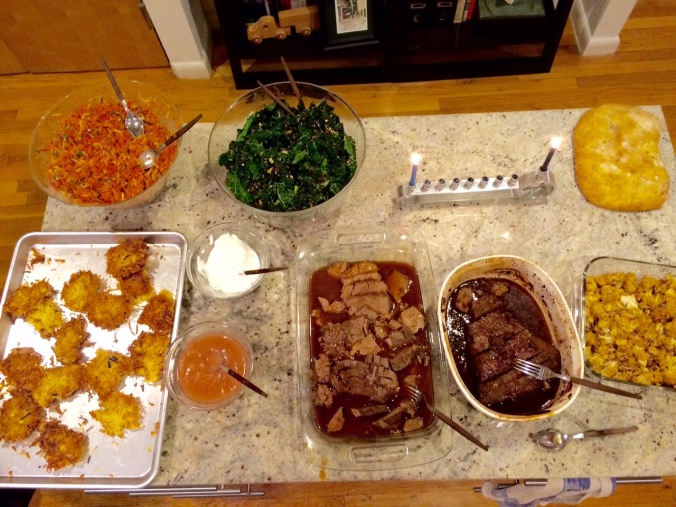 (Oh, and see those latkes? We’ll be talking about them next week.)