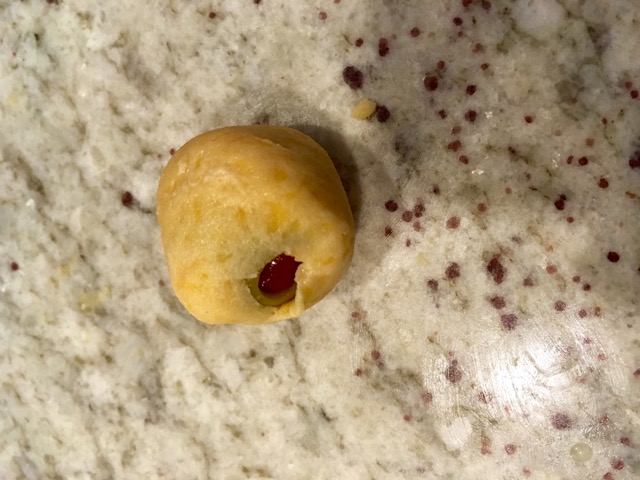 Do you love your friends, but also hate them, maybe, just a little bit? If so, I suggest a cool party trick.

Next time you invite people over, set out a plate of these crispy little spheres, which look invitingly golden-brown and smell like homemade Cheez-Its. Tell them that each morsel has a surprise stuffed inside, and invite them to take a bite. Then watch their faces screw up quizzically, hopefully… and fall the moment they discover that rather than being filled with mini hot dogs, or bacon, or hell, more cheese, Nonnie’s cheese pops are actually buttery crispy flakes concealing, guess what, pimento-stuffed green olives. Suckers!!

Not that there’s anything wrong with cocktail olives! They have their place: the dusty jar at the back of the supermarket shelf, the martini glass of a James Bond played by somebody less fancy than Daniel Craig. Where they do not belong, arguably, is nestled within cheddar-spiked pastry, although apparently these unpredictable little packages have a history; Julia Reed made a passing reference to them in this 2003 New York Times Magazine story about cocktail parties circa 1948, one that was intriguing enough to inspire Amanda Hesser to include the recipe in her mammoth 2010 update of the New York Times Cookbook.

In the book, Hesser says that the olives, “swaddled in a thin, spicy dough, are dangerously addictive.” I’m not sure I’d go that far, probably because I’m not generally a huge fan of olives to begin with. I’ll admit, though, that if you’re feeling generous enough to warn your friends what lies beneath that appealing pastry shell, they may find themselves actually enjoying these weirdo hors d’oeuvres—which actually aren’t bad, per se, as long as you know what you’re getting into. 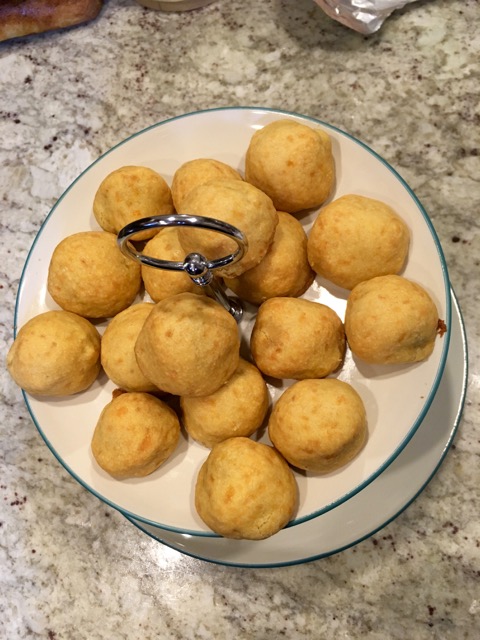 1/2 cup soft butter
2 cups grated cheddar cheese
1/2 teaspoon Worcestershire sauce
2 drops Tabasco sauce
1 1/4 cup flour
48 stuffed olives [Note: I intended to halve this recipe, out of a fear that nobody at my party would actually want to eat them. Then I accidentally made the whole amount of dough, because I’m an idiot who forgot how much butter is in half a cup.

But even though there were only 18 olives in the Goya jar I used, I ended up with just a little bit of extra dough—not nearly enough to cover 30 more olives. Did I accidentally purchase a container of mutant monster olives, or is the recipe faulty? I’ll never know, though if you are for some reason moved to replicate it in full, you might need to double the amount of dough.]

Combine butter, cheese, Worcestershire, and Tabasco. Blend in flour, and knead to a smooth dough. [Warning: it’ll be soft, like, really soft, so you might find it easier to do this with a mixer than with your hands.] Shape into a long, smooth roll and cut into 48 slices. [Yeah, no; this is impossible to do, at least without chilling the dough, which the New York Times cookbook suggests. Their dough also contains an egg, which probably makes it easier to shape.]

Drain olives and pat dry. Wrap each olive in a pastry slice, sealing well. [Because my attempts at log-rolling and slicing ended up failing miserably, what I did instead was break off a small, roughly half-ounce blob of dough for each olive, and smush the ball flat into my palm. Then I’d place the olive in the middle of the flat blob, and roll it around in my hands until it was covered roughly evenly on all sides by pastry. It’s easier to do than it is to describe, I promise.]

Place on a cookie sheet and bake in 425 oven 8-10 minutes, or until golden.  [Mine took much longer—about 18 minutes altogether, and they still weren’t quite as golden as they probably could have been.] Note: unbaked pastries can be frozen. Bake frozen in 425 oven for 10-12 minutes. 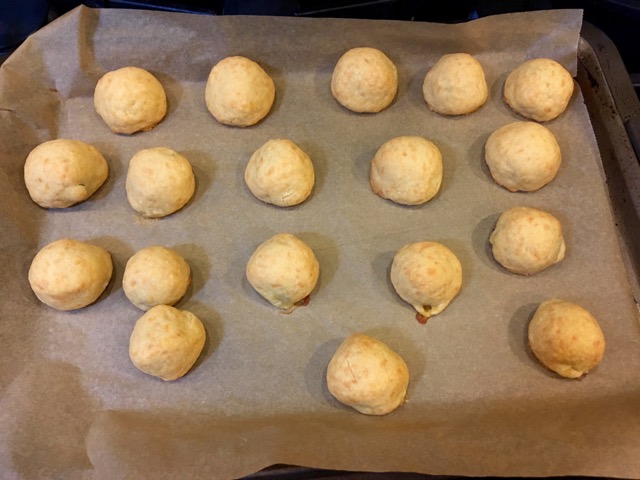 The verdict: Although certainly not as weird as the shrimp puffs I served them alongside, I wouldn’t exactly call Nonnie’s cheese pops—which the Times, in a move for transparency, calls “hot cheese olives” instead—a crowd-pleaser. If you don’t mind olives, though, they’re not bad—mostly because it’s tough to turn down any buttery pastry with the cheese baked right in.

Speaking of: remember how I had a bit of dough left over? I ended up mushing it into a vaguely polygonal shape, then scoring it with a pizza cutter and baking it separately at 425° until it, too, was golden brown. I ended up with a handful of perfectly flaky, Cheez-It-esque crackers that made me wish I’d ditched the olive thing altogether and just made cheese straws—which, incidentally, the New York Times has an awesome recipe for.

Although I will say that cheese straws/crackers don’t look quite as bizarrely handsome in cross-section as the cheese pops do.