Almost a year ago, I proposed that there’s nothing more American than snarfing down monstrous amounts of fat as you criticize the bodies and outfits of people infinitely more athletic than you. Upon further reflection, however, I’ve come up with something that surpasses even that: there is in fact nothing more American than appropriating another nation’s cuisine to make a globular casserole that nixes any authentic seasoning, ups the fat, and treats vegetables as a necessary evil at best—employing only the most basic produce in the most perfunctory way possible.

By that criteria, Nonnie’s “tamale pie”—a Meximerican frankenfood that has little to nothing to do with actual tamales, i.e. pockets of masa dough stuffed with various fillings and steamed in corn husks or banana leaves—may be the most American dish I’ve ever made on this here blog. It’s less like the tamale pies you’ll find via Google, which mostly look like Mexican-ish shepherd’s pies with cafeteria taco mix standing in for the beef and cornbread standing in for the mashed potatoes, and more like a Mexican lasagna. Which, again, is not a thing they actually eat in Mexico.

Basically, you cook some beef with canned enchilada sauce (quelle horreur!), layer it between a few corn tortillas, glop sour cream on top, and stick the whole thing in the oven for 25 minutes. What emerges is, of course, delicious in the way that kids menu delicacies often are, all umami grease and delightful dairy blandness (the enchilada sauce does not, in fact, do much in the way of flavoring).

The snob in me can’t exactly recommend it in good conscience—at least, not without some significant modifications—but my inner child, who subsisted on buttered noodles and chicken fingers for the better part of 14 years, gives it two enthusiastic thumbs up. It’s about as Mexican as a Taco Bell seven-layer burrito, and every bit as satisfying—as long as you make one essential tweak.

1 onion, chopped
1 green pepper, chopped
8 oz. water [Skip this. I’ll explain later]
1 cup grated cheese: jack, cheddar, or mozzarella [I used part-skim moz, in a vague attempt to make this less of a gut-bomb. Yeah, it really helped]
3 tablespoons oil [You don’t actually need this much—two would be plenty]
1 lb. lean ground beef
1 10 oz. can enchilada sauce [What’s actually in that neon-red slurry? According to my can: water, tomato puree, corn starch, and the tiniest bit of actual flavoring (salt, vinegar, chili). You can definitely do better on your own]
6 corn tortillas
1/2 cup dairy sour cream
Pitted ripe olives [What is with the midcentury obsession with putting olives in Mexican food? Who ever thought that was a good idea? I left them out, because ew]

Heat oil and cook onions and green pepper until soft. Add beef and cook until beef is brown. Add enchilada sauce and water; cook and stir for a few more minutes. [Warning: adding the full amount of water, along with the can of enchilada sauce, will result in a gross, soupy mess that looks like this:

Appetizing, yes? If I ever make this again, I’m definitely ditching the water (and making my own enchilada sauce, though that goes without saying). I had to cook it down much longer than Nonnie suggested to get the soupiness in check, between 10 and 20 extra minutes.]

In a greased 9″ square baking dish, make a layer of tortillas (tearing as necessary to fit), meat sauce, cheese, and olives. Top casserole with sour cream (can put a layer of sour cream in middle). [I did that; I also ended up making two layers of everything—tortillas, meat, cheese, sour cream—ending with sour cream on the top.] 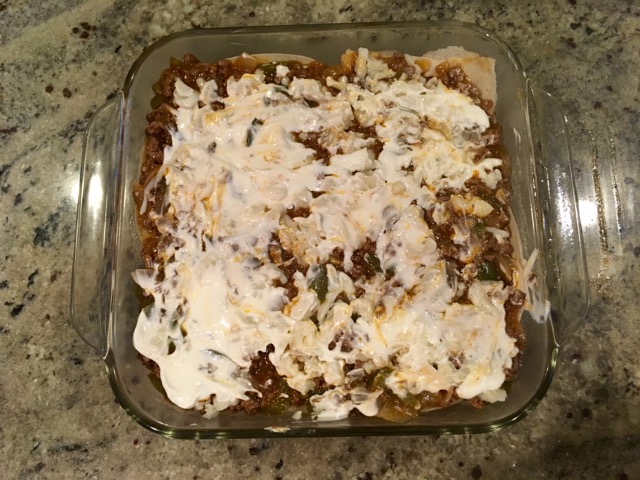 The verdict: You know what’s weird about this recipe? It contains absolutely no salt, other than the heroic amount of sodium in that can of enchilada sauce. In fact, that thin red sludge is the only seasoning in the whole casserole, and it’s definitely not enough. There’s some school cafeteria comfort to be found in the recipe as written, but mostly, it’s a meaty, bland mess, and I do mean mess—this stuff refuses to be plated in neat squares.

There is, however, an easy remedy to that blandness, at least if you’ve got a fully stocked arsenal.

Don’t want to eat something that’s only palatable after you drown it in hot sauce? We are not the same, but I understand; I’ve also got visions of making a tastier, less 50s chic version of this recipe, one that involves rehydrated chiles and fire-roasted tomatoes and cumin and a layer of beans and, for sure, some actual salt.

Really, though, this version wasn’t a total disaster, as long as you don’t care about authenticity or flavor—which, again, seems pretty damn American to me.