Isn’t it funny how notions of sophistication change dramatically from decade to decade? In the ’90s, high-end restaurants fell hard for chocolate lava cake. In the ’70s, suburbanites thrilled to tiny skewers, melted cheese, and wife-swapping. In the ’60s, pre-Friedan-era housewives thought that drinking Heineken with dinner would fill the yawning chasm in their souls, or so Mad Men has led me to believe.

And in the late 1890s, a Swiss maître d’ named Oscar Tschirky won over a room of Gilded Age socialites and robber barons with a cutting-edge appetizer that was, essentially, just chicken salad without the chicken. (Tschirky also may have invented Thousand Island Dressing and Eggs Benedict, which mostly makes me think that he was in the pocket of Big Mayonnaise.)

More than a century later, the Waldorf itself has closed, and most of its rooms are on their way to being transformed into luxury condos (of course)—but the salad persists, at least according to the New York Times.  Well, at least, versions of the salad persist; in this day and age, the original Waldorf is a decidedly weird thing to eat. It feels retro, but not in a fun, ironic way; when I hear the dish’s name, I imagine Eloise—having run away from her nanny at the Plaza for an afternoon, maybe—impulsively ordering it from room service, then refusing to eat a bite once it arrives.

Still, I tried to keep an open mind when I made Waldorf Salad for myself for the first time. Separately, every ingredient has its place in the culinary landscape; why shouldn’t they work when combined? And besides, if this stuff was once good enough for Astors and Rockefellers and Fricks, why shouldn’t it be good enough for the likes of me—a member of the petty bourgeoisie who still follows the five-second rule? 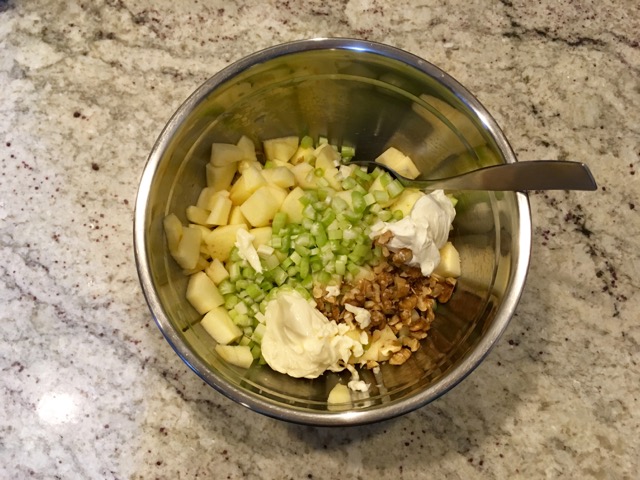 Place lemon juice in a bowl and add apples as they are diced. [Ideally, you’ll cut the apples and the celery so that the pieces are approximately the same size. If you do this, you’ll need more patience than I have; I ended up with bitty pieces of celery and big chunks of apple, because apples take a long time to cut, damnit.] Add celery and nuts and mix well. Combine mayonnaise and sour cream. Pour over apple mixture and blend well. [Caution: the recipe as written would make a lot of Waldorf salad; I halved it, and still had plenty.]

Okay, okay, Ghost of Oscar Tschirky; I’m sorry for making fun of your Very Important Salad. I’ve got to say, though, that even after tasting it, I think Waldorf salad is weird as originally conceived. It’s too sweet to be an appetizer, and too savory to be a dessert. It feels lacking somehow, which is probably why so many chefs have used the general Waldorf playbook—apples, nuts, creamy dressing—as inspiration for more fully-realized dishes, rather than serving Waldorf salad as is. Sure, this mayonnaise-drenched fruit was apparently novel enough to wow New York’s elite during the second Grover Cleveland administration, but in an age where gas lamps are gone and women can vote, it doesn’t quite cut it.

As it turned out, though, transforming Waldorf salad into something I actually wanted to eat was as simple as adding the key ingredient in another mayo-heavy American concoction with its roots in the 19th century: chicken.

I poached a boneless, skinless breast (it was one of those ridiculously huge ones, weighing in at a little more than a pound), cubed it, and added it to the Waldorf mixture, along with another stalk and a half of celery, a few handfuls of walnuts, and—speaking of food trends!—a few spoonfuls of yogurt, in an effort to avoid further mayo-ification. The tweaks instantly solved the salad’s identity crisis, transforming it from a dated curiosity to a very respectable sandwich filling. Perhaps my innovative spirit would make Tschirky proud after all.

One thought on “Waldorf Salad”