The noodle kugel of my dreams is not studded with rum-soaked raisins (blech), or crushed  canned pineapple (double blech), or synthetic apple pie filling (the blechiest of all the blechs). It is not sweetened with sugar, or topped with crumbled cornflakes, or scented with vanilla or cinnamon any other member of the pumpkin spice family. And you’ll never be confused about when to eat it, because it’s not some unholy combination of side dish and desert—it’s savory, damnit. It’s a kugel for adults. And whenever it appears on a buffet (or, you know, the stovetop, because there’s only so much room on a kitchen counter), it’s also the center of attention.

There are two things I know to be true: one, kugel is the best, and two, most people’s kugel is not the best, because they insist on making it sweet. Whose bright idea was it to combine delicious, buttery egg noodles and cheese with fruit and sweeteners in the first place? I couldn’t tell you, though the New York Times informs me that the first published kugel recipe in America—printed in 1871—came complete with sugar and raisins, which means American Jews have been suffering under the iron yoke of bad kugel for more than a century.
Look for a kugel recipe, and something like nine out of 10 of the results will be sweet; the results that are savory tend to be for kugels involving potatoes or caramelized leeks or, dear god, mushrooms and kale (what the hell are you doing, Whole Foods?).  It’s nearly impossible to find a decent blueprint for a simple, savory noodle kugel—which is where Nonnie comes in.
Well, okay, technically it’s where my mom comes in. For whatever reason, Nonnie neglected to include her perfect noodle kugel recipe in the cookbook she gave my mother when she got married, which I’ve been using as the backbone of this here blog for more than two years now. But thankfully, my mom’s familiar enough with its construction that when I asked her for the recipe, she quickly typed it up and emailed it to me from memory—a bit of next-level maternity I can only hope to achieve in my own future.

It’s simple, really—just cook some egg noodles, then combine them with every item in the dairy aisle, plus (and this is key!) some gently sautéed onions and garlic, brimming with salt and black pepper. Pop the whole thing into an oven until the top is beautifully browned; dust it with paprika and run it under the broiler if necessary to get an even prettier crispy top.
I skipped this step yesterday, when I made my latest kugel, because it was Yom Kippur and I couldn’t wait even one extra moment to get the kugel from the oven to my gaping maw. I did end up missing the extra-bronzed lid… but mostly, I was too happy to be eating the perfect kugel to mind much. 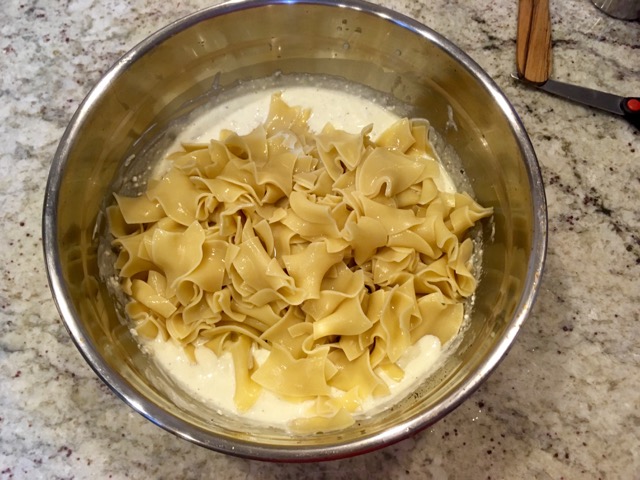 Preheat oven to 350. Follow instructions and cook the noodles al dente (for me, that took about seven minutes); drain and rinse with cold water to stop them from cooking. Heat olive oil in sauté pan; sauté onion and minced garlic until translucent, then let cool. (If you’re me, and you don’t feel like getting another dish dirty, this is also a great opportunity to melt that butter—just drop it into the pan with the onions, and try not to weep at the delicious resulting smell, especially if you’re also fasting.)

Whisk eggs; add melted butter, sour cream, cheese, and salt and pepper to taste. Then stir in onion/garlic and minced parsley, as much as you want or don’t want. (I didn’t want ANY; sorry, Mom.) Pour mixture into a buttered pan (not too shallow) or cast iron skillet, top with paprika, and bake 35-40 minutes, until casserole is set and the top is browned.

The verdict: Guys, I buried the lede here. I didn’t just make one kugel for break fast; I made two, because certain parties were concerned we wouldn’t have enough food. Let the record show that I am making a heroic effort to avoid “I told you so”-ing today, when we’ve only just managed to dig ourselves out from underneath a pile of smoked fish and bulgur salad and homemade bread and rugelach and, yes, kugel.

Don’t get me wrong—the potato kugel was good, even if mine turned out a bit more gray than its Smitten Kitchen inspiration. (I’ve never really enjoyed any non-noodle kugel before, in fact, but that’s because I didn’t know you could make one out of potatoes that was essentially a giant latke.) But the proof is in the (leftover) pudding: we’re in for a week of reheated potato kugel (how tragic!), but its noodley cousin is almost gone.
Did I mention, also, that the noodle kind tastes almost as good when you eat it cold, while standing in a dim kitchen lit only by the glow of the open fridge? At least, that’s what I’ve been told.

One thought on “Savory Noodle Kugel”