See that, up there? That charred, vaguely carcinogenic square of bone and gristle? That is not, I think, what Nonnie had in mind when writing up her recipe for beef ribs. Beef ribs should look like this: caramelized, glistening, Flintstonian. They should yield meat tender enough to fall off the bone; they shouldn’t be shriveled and tough and sad-looking.

You know what, though? It is nigh on impossible to buy beef ribs in this day and age. Really! I tried! I spent a sweaty summer afternoon trudging from fancy Brooklyn butcher to less fancy Brooklyn butcher, on a quixotic quest to track down the kosher-style protein of my dead grandmother’s Semitic dreams. (Maybe if I’d said that to them, the meat-slingers would have been more accommodating.) I went to four—count ’em, if you happen to have a map of Cobble Hill/Brooklyn Heights handy!—places, all told: two told me I was SOL, one was closed, and one said that it would have beef ribs eventually, but not until the fall. Because… that’s when… a cow loses its baby ribs? I don’t know.

Because of all that, I must admit upfront that I have failed you. I couldn’t find the right kind of ribs; because I was already on the hook to make dinner for six people that night (i.e. I’d offered to cook; they’d taken me up on it), I elected, instead, to make a rack of delicious pork ribs (I know, I know, a shonda fur die goyim!), and to buy a handful of beef shortribs with which to test out Nonnie’s recipe—knowing full well that they were wrong, wrong, wrong for the task, but also knowing that there was no way I was going to find a real rack of actual beef ribs without special-ordering them.

And you know what? I didn’t want to just wait and order the right kind of ribs at a later date. You know why? I’ll tell you, you nosy little so-and-so: because there is no way that Nonnie’s recipe as written would yield the kind of tender, glistening results worthy of special-ordered meat. For reasons beyond my comprehension, Nonnie has you cook your ribs fast and hot. Fast and hot! That is literally the opposite of how you’re supposed to cook tough, barbecue-ready cuts like ribs—and given Nonnie’s excellent brisket, she should have known that too.

For whatever reason, though, she didn’t; her recipe calls for ribs to be roasted in a 450 to 500 degree oven, for the whopping duration of 20 minutes. Look, I’m from Pittsburgh; I grew up thinking that “barbecue” was synonymous with “dinner where you cook your hamburgers outside.” I didn’t know that goyim even knew what brisket was until I went to Hill Country for the first time at the age of 18. Now, though, I am older and wiser in the ways of meat—and I know for a fact that this recipe right here? This is not how you make ribs. But for the sake of completism, I’m going to post about it anyway.

(Oh, and when I made the ribs: I made some cole slaw too.)

Mix all ingredients (except ribs) together and brush on ribs. Roast in a hot oven (450-500) for 20 minutes. [DON’T DO THIS. THE RESULTS WILL BE BAD. CANNOT STRESS THAT ENOUGH: BAD.] Baste once or twice and turn ribs after half of cooking time has elapsed. [You know, so they’re badly cooked, but evenly so.] 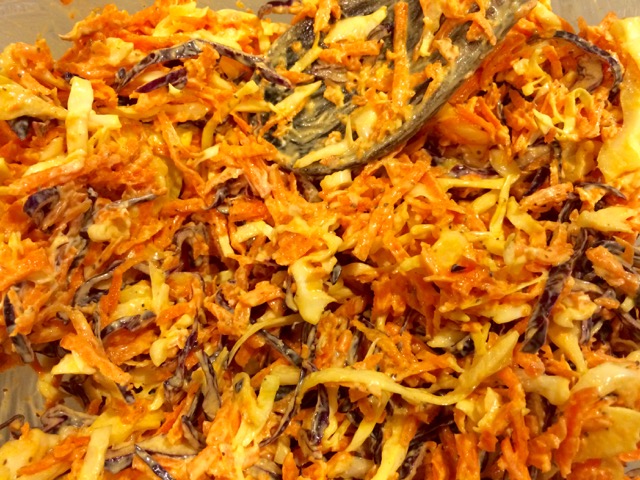 Wash cabbage and drain well. Place all ingredients in a large bowl and mix well. Cover and refrigerate for a few hours before serving.

The verdict: The short ribs? They were clearly no good, for all the reasons outlined above; they were cooked through, sure, but tough as all get-out. Oh, and the Nonnie-recipe barbecue sauce I slathered them with got super, super burned in the oven, forming a stiff, charred crust that made those poor short ribs even less appetizing. That said: The sauce itself was fairly tasty, a sweet, zingy, mustard-y concoction that was a nice change from my tomato-based norm. And it also tasted delicious when spread atop the pork ribs (I know, I’m sorry, don’t hate me!) I made via this recipe—which is an A+ method, really great, don’t wait, call 8 and make them tonight, if you have six hours to spare.

The cole slaw was fine. Maybe next time, I’d add some scallions.