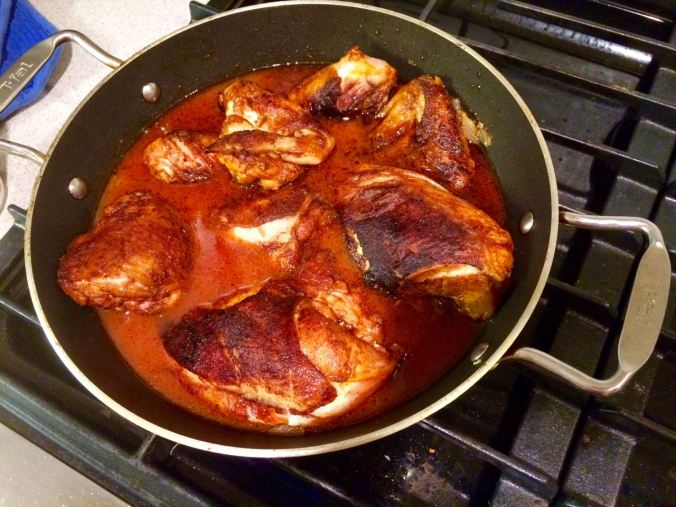 I have decided that for the rest of the blog post, we are going to talk like this.

Popular paprikash preparation produces poultry that isn’t particularly piquant. For a pepper pusher, this is a pretty pressing problem — almost as prohibitive as providing prose primarily dependent on the letter “p.”

Translation: Nonnie’s paprikash — like most versions of the dish you’ll find stateside — isn’t nearly as spice-forward as you might assume, given the fact that it’s named for the brilliantly red powder that comprises its primary component. (Damnit, I’m doing it again.) 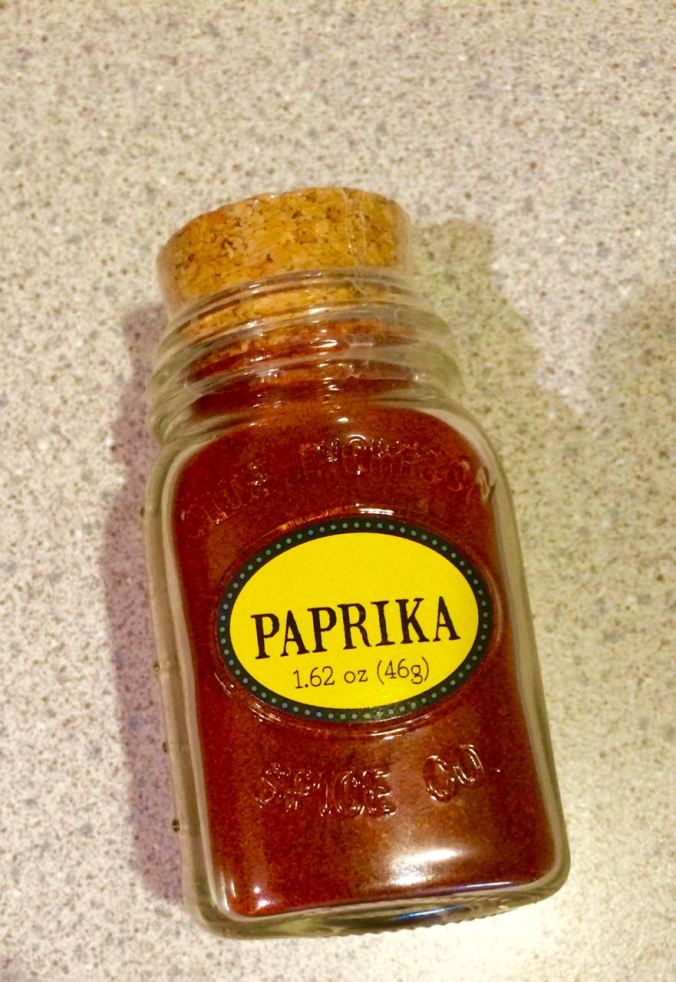 Maybe this is partially the fault of the dish’s finishing element — a full cup of straight-up sour cream, which softens the paprika’s bite. It’s also a function of Nonnie’s particular recipe, which coats raw chicken with a mixture of flour and paprika but doesn’t incorporate additional paprika into the sauce.

Mostly, though, it’s because generally speaking, commercial paprika just doesn’t taste like much. My fancily-packaged variation (with a cork stopper! How much Brooklynier can you get?) had more oomph than the typical supermarket stuff, but not a ton more; in my finished dish, the paprika ended up functioning more like a coloring agent than an essential flavoring agent. And even there, it was muted by the cream again.

You know what, though? That mattered a lot less than I feared it would — because even with subpar paprika, this dish is good. Like, go-for-seconds-and-lick-the-serving-fork good. Like, I-finished-off-the-last-of-it-days-ago-but-I’m-still-thinking-about-it good.

It’s the total package — ultra-tender and juicy slow-cooked meat, blanketed in a sauce that’s simultaneously ultra-savory, rich, and tangy, with an ever so slight peppery kick. 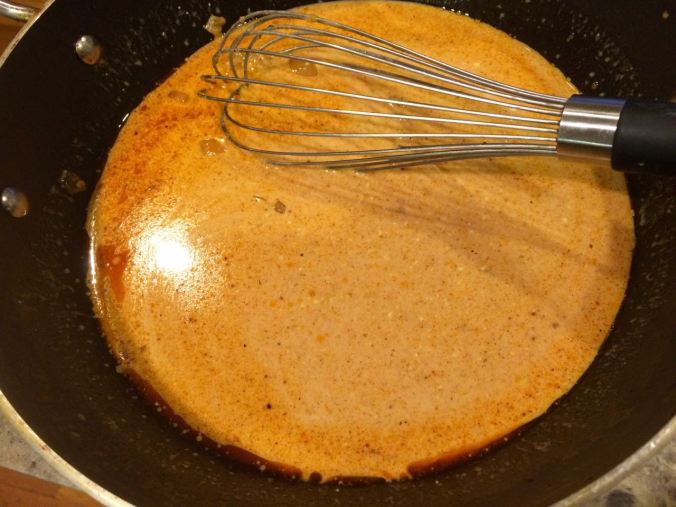 The sauce is so good, in fact, that it would be a crime to serve it without some kind of carb designed to sop up as much of that liquid gold as possible.

I was going to go with a simple bowl of buttered egg noodles before I realized that Nonnie’s got something even better up her sleeve — a quick, buttery noodle-and-cabbage casserole, which ups the side-dish ante while also helping to prevent you from eating a dinner that’s entirely dependent on fat and carbs. (Although if avoiding fat and carbs are your thing, you might just be barking up the wrong Internet tree.) 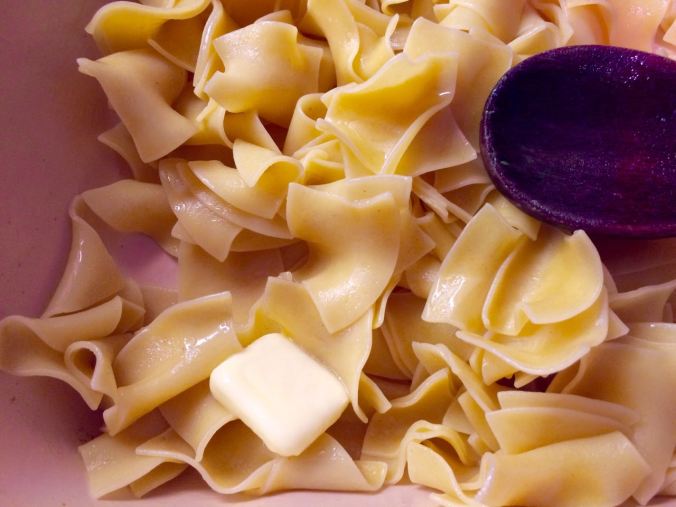 1 fryer [a.k.a. a small chicken], cut into 8 pieces
1 clove garlic, crushed
3 tablespoons flour
3 tablespoons paprika [I’ve heard that the schmancy, expensive Hungarian stuff is worth seeking out; my first spin at paprikash was delicious enough that I can only imagine how much better it’d be with real paprika]
2 tablespoons oil
2 tablespoons butter or margarine [Go for butter, obviously. If you’re going to break the milk-and-meat rule, you might as well go all the way]
2 tablespoons tomato paste
1 1/4 teaspoon salt
1 cup chopped onion [Save yourself from having to wash a measuring cup by just using one small onion instead]
1 can chicken broth [Choose one that’s low- or no-sodium; the broth will reduce on your stovetop for a long time, and you don’t want the final product to end up super salty]
1 cup dairy sour cream 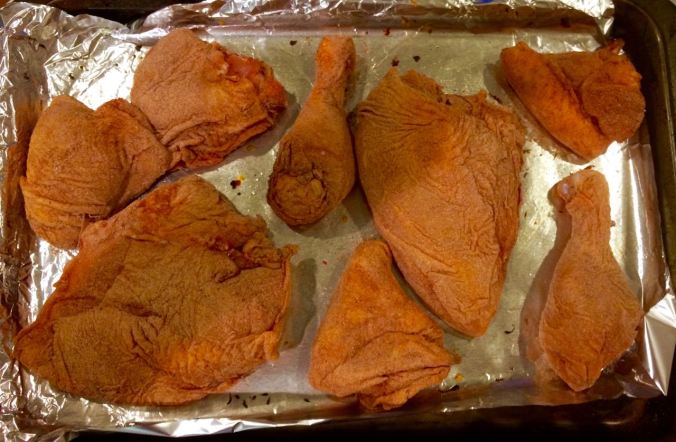 Wash chicken [no, don’t ever wash your chicken!!!] and pat dry. In a paper bag, combine flour, salt and paprika. Place a few pieces of chicken at a time in bag and shake it to coat. Repeat until all chicken is coated lightly.

Heat oil in large skillet, add butter and heat. [If your skillet’s dinky and you don’t want this step to take twice as long, just divide the fat into two pans and brown all eight parts at the same time.] Brown chicken lightly on all sides. Remove chicken from pan.

Stir onions into drippings and sauté lightly. Remove excess fat. [How Nonnie expects you to do this after adding the onion, I have no idea; I’d say you should instead pour off excess right after removing the chicken.] Add tomato paste, garlic, and a pinch of salt, and chicken broth. Blend well. 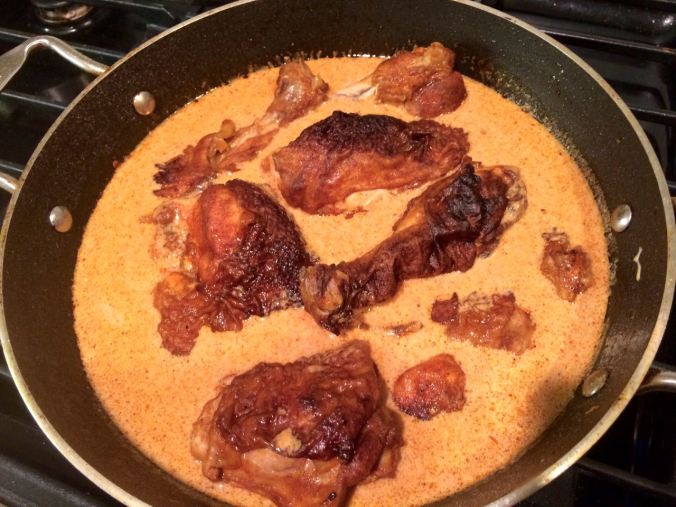 1/2 lb. medium noodles [I used wide egg noodles, which came in a 12 oz. package, which means I’ve now got 1/3 of a package of noodles chilling in my cupboard; you might as well just dump in the whole package instead, and maybe get a slightly larger head of cabbage to compensate]
1 small head cabbage [green, not red]
2 onions, chopped
Salt and pepper
2 tablespoons butter 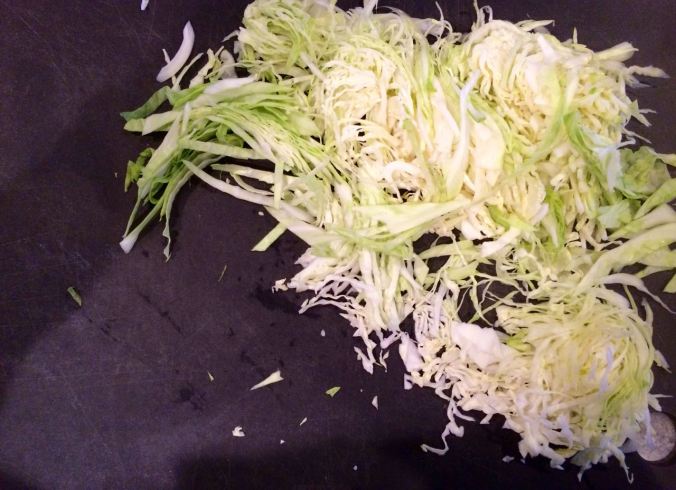 Cook noodles in salted, boiling water for 5 minutes. Drain well and place in a greased casserole. [I used my big, lasagna-sized dish, and was glad I did; a smaller one might not have enough room for everything.] Stir in 1 tablespoon butter.

Shred cabbage and wash well. Sauté onion in 1 tablespoon butter until tender. Add cabbage to onions, cover, and steam for 2-3 minutes. [It may be tough to fit everything into one skillet, but the cabbage will wilt and reduce in volume slightly as it cooks — just stir up from the bottom every now and then to make sure it’s steaming evenly.] 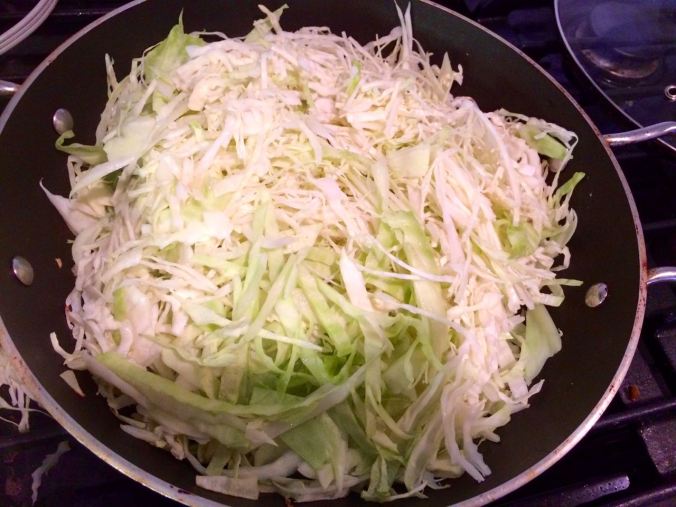 Add onion-cabbage pmixture to noodles; add salt and pepper; stir well, and heat in 350-400 oven for 10 minutes, uncovered. Parmesan cheese can be added to casserole before placing it in oven. [I didn’t bother with it, considering the large amounts of butter, sour cream, and chicken fat we’re already dealing with here.] 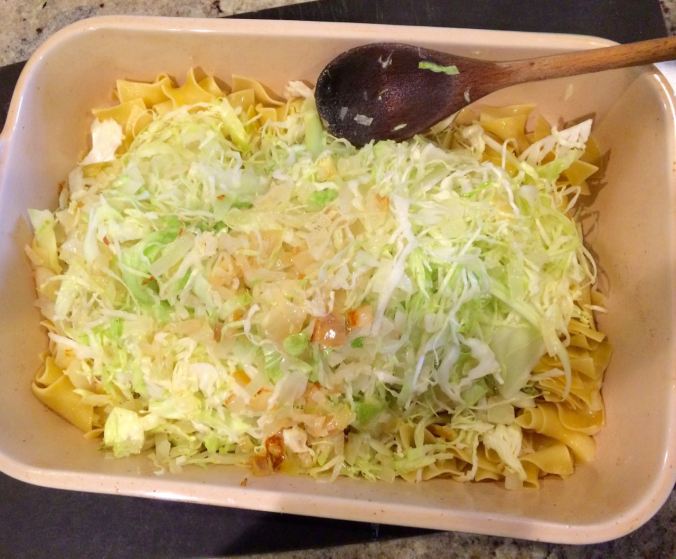 The verdict: So. Good. Put together, these dishes make the ultimate comfort food — creamy and rib-sticking and ridiculously satisfying, with the tang of the sour cream, the slight crunch of the cabbage, and the hints of paprika preventing things from being too one-dimensionally rich. (It also helps to serve this pairing with an actual vegetable; I made some charred lemony broccoli, which did the job nicely.)

It’s a real bang-for-your-buck combination that delivers great rewards for minimal effort; you could make things even simpler by just tossing the cabbage with the noodles instead of baking them together in a casserole, or by nestling your chicken pieces directly into the broth rather than browning them. Or, for that matter, by tossing everything together into a single, unholy chicken-noodle-cabbage-paprikash-casserole, which sounds both gross and delicious.

That said, next time, I’d make a few improvements in order to take this over the top. I’d bake the noodles longer to get more crunchy corners, and I’d definitely add more (and higher-quality) paprika to the chicken as it stewed. I’d also spice it up with cayenne pepper to taste, because that’s just who I am, don’t try to change me, man — although I can vouch for how good the base recipe tastes when doctored with a healthy amount of Slap Ya Mama. 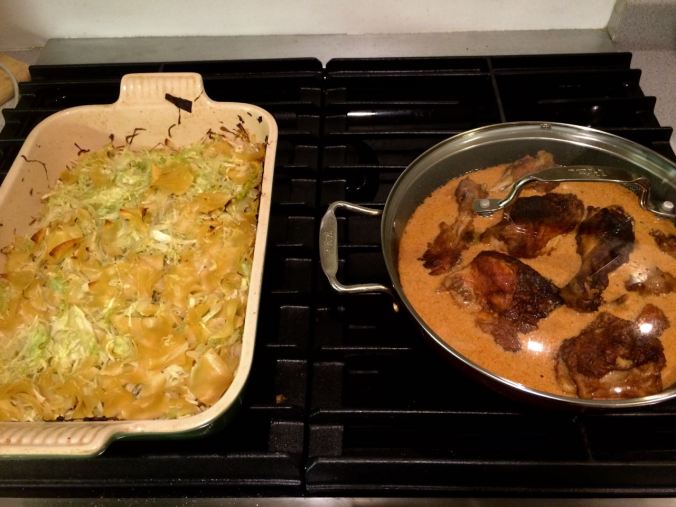