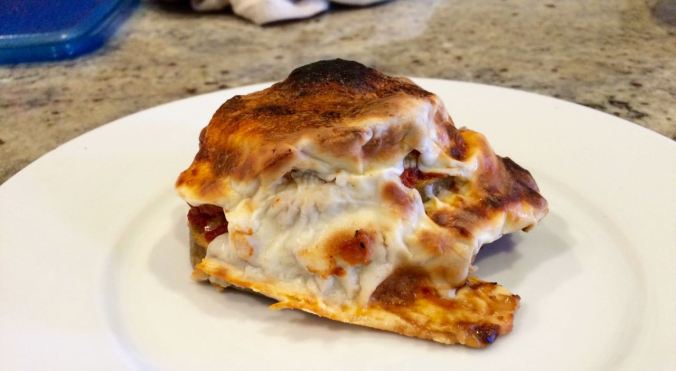 So as I’ve written before, the first thing I ever really cooked for myself — beyond scrambled eggs — was Nonnie’s ratatouille.

But the first fancy thing I ever cooked — something that required preparing separate ingredients in different ways, making a sauce, carefully assembling a final dish that was not only tasty but also pretty — was  Gourmet magazine’s intricate inside-out eggplant parmigiana, an artistically deconstructed take on the fat kid classic. (You know, the kind of thing a Top Chef contestant would call “my play on eggplant parmesan.”) 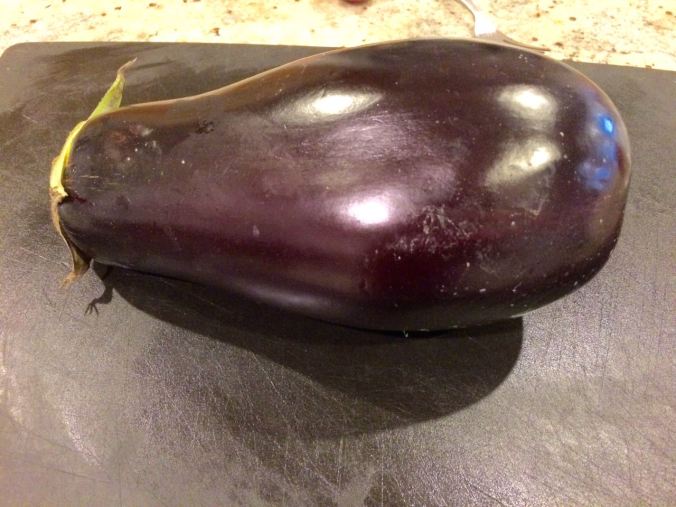 I should add that I didn’t actually make the inside-out eggplant parm myself. Attempting the recipe was actually my friend Miriam’s idea; straight out of college, she was a much more experienced cook than I was (and a former Gourmet intern to boot).

Mostly what I remember about the eggplant parm we made are the things I did wrong — buying a can of fire-roasted tomatoes instead of the regular kind, making messy heaps that looked like a child’s art project next to Miriam’s meticulous stacks.

It was a delicious learning experience, to be sure…but I never attempted eggplant parm again until I took Nonnie’s for a spin. 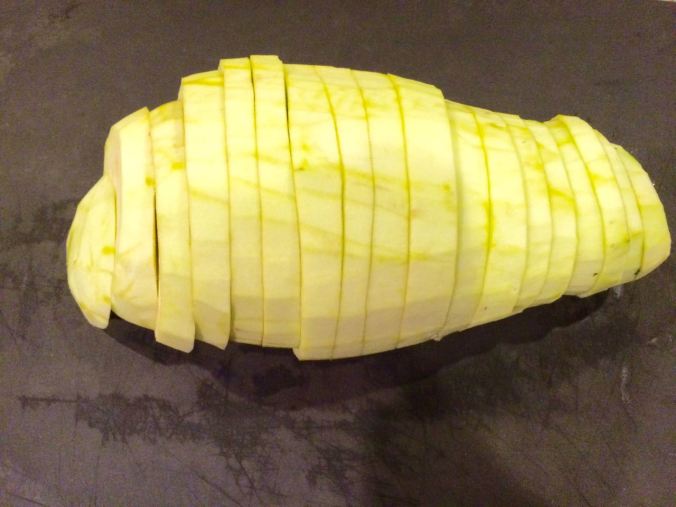 She makes a point of noting in her cookbook that hers is a “quick” take on the Italian-American staple. I’m not sure what “quick” meant in California in the ’60s, but I can tell you that there’s nothing speedy about this recipe. When the chopping and the mincing and the peeling and the simmering and the salting and the roasting and the assembly and the baking are all taken into account, it’ll easily be over an hour before you’re tucking into some cheesy, tomato-y goodness.

I can guarantee, though, that the wait will be well worth it. Especially if you take a leaf out of Gourmet‘s book and arrange the parm in cute little stacks — just ’cause.

1 large eggplant [mine was around 2-2.5 lbs, and I ended up with six stacks of three eggplants slices each]
1 tablespoon mayonnaise [You just can’t keep a Nonnie from her mayo — and by the way, you’ll almost certainly need more than a single tablespoon here]
One 1 lb can tomatoes
2 tablespoons tomato paste
1/2 teaspoon basil
1/2 lb thinly sliced mozzarella cheese [a.k.a. about half a standard ball of the good stuff]
1/2 cup grated parmesan cheese
2 cloves minced garlic
1 tablespoon minced parsley
1 teaspoon salt
Pepper

Combine tomatoes, tomato paste, salt, pepper, and basil in a saucepan. Bring to a boil, mixing and crushing tomatoes; reduce heat, and simmer, uncovered, for 20-30 minutes, stirring occasionally. [Do this first so that the sauce can cook while you prep the eggplant, by far the recipe’s most time-consuming element.]

Peel eggplant [or don’t! I think you could easily skip this step without sacrificing anything] and slice about 1/2″ thick, and let stand on paper towel for about 20 min. Lightly salt each slice. [Not sure why Nonnie tells us to do this after we let the eggplant stand for 20 minutes, but: I’m going to assume she wants us to salt the eggplant first, in order to prevent the final dish from being watery.]

Pat dry and spread a very thin layer [Nonnie’s emphasis, not mine] of mayonnaise on each slice (one side only). [As it turns out, the mayo-baking approach is more common than I would’ve assumed; guess it beats breading and frying each piece, which would make this recipe even more labor-intensive.]

Place on a cooky sheet [Nonnie’s spelling — charmed, aren’t you?] and bake in a 425° oven for 10 minutes. Turn and bake other side for 10 minutes. [I was worried that baking the eggplant this way would lead to slices that were shriveled and wrinkly rather than meltingly tender, and I was partially right; it was especially tough to get the un-mayo’d sides off the baking sheet, since they had no fat barrier to help keep them from sticking. Look at Bottom Righty for proof. Kind of looks like a Forever Alone face, doesn’t it?

That said, the final product ended up tasting fine — but I’d still probably brush the non-mayoed eggplant sides with some olive oil next time, for the sake of insurance.] 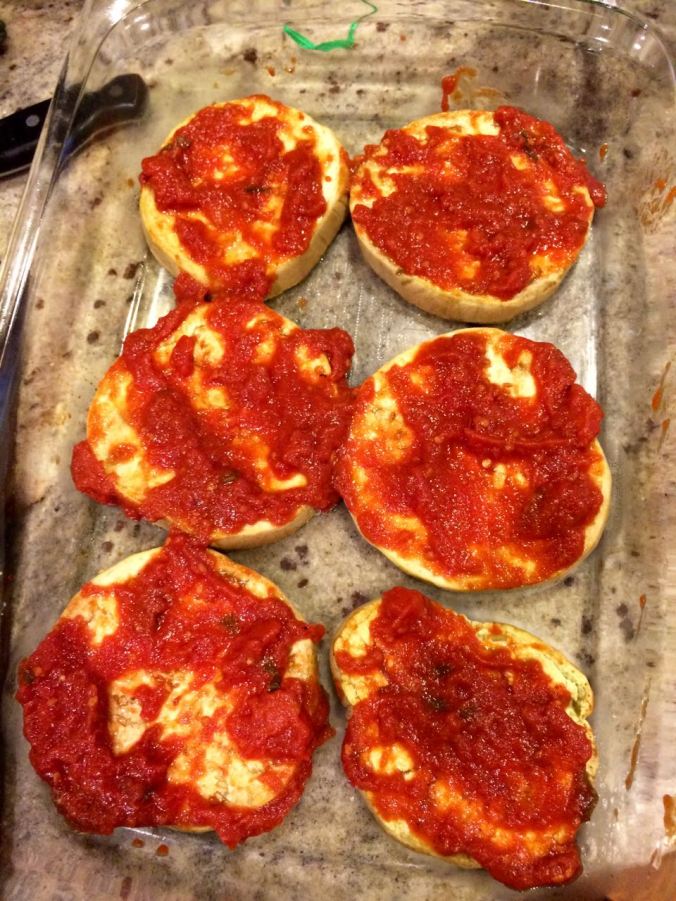 Bake in 375 oven for 25 minutes, or until cheese is browned and bubbly. [Following those instructions gave me this — which didn’t have as much color as I’d want ideally, and also left an unappetizing watery sludge at the bottom of the pan.

So I tried to cook off some of the liquid by cooking the pan on top of my stove for a few minutes, then ran it under my broiler for five minutes. That left me with a much more attractively browned set of parm stacks — which I was too busy admiring, then eating, to take a group shot of. Oops!]

The verdict: A hearty, gooey, über-cheesy  dish that tasted as good straight out of the oven as it did after reaching room temperature, not to mention cold straight from the fridge (as pictured above).

There was a nice balance between acidic tomato sauce and savory eggplant; the proportions for each layer were on point, though I probably could have gone for a little more sauce overall. (That’s generally my position whenever tomato sauce is on offer, though.) And despite the metric ton of mozzarella blanketing each stack, the end product was also deceptively light, maybe because of portion control inherent to crafting discrete little eggplant piles rather than a giant casserole.

That said: Next time, I’d love to try doubling the recipe and filling an entire pan with the stuff — because when has more eggplant parm ever been a bad idea? I’d also love to see how it holds up inside a soft sandwich roll, blanketed with an additional layer of sauce. My hunch is that the answer would be “preeeettty well,” or however that sounds when you’re trying to talk through a mouthful of sandwich.

One thought on “Eggplant Parmesan”