After an eerie but lovely 24-hour-long warm snap, New York’s been pummeled by a week of dreary, drizzly, altogether bleak weather. Some might respond to this Seattle-esque malaise by  pulling out an oversized flannel shirt and writing a song about heroin. I think it’s probably healthier to fight it with food—specifically, the brothy, soul-warming kind that comes complete with two kinds of carbs and some slow-simmered short ribs.

That’s right: the very first ingredient in Nonnie’s “vegetable soup” is beef. There’s bacon in there too, and a directive to toss in a bag of unspecified frozen veggies. It is, in other words, perhaps not history’s most farm-fresh vegetable soup—but its hearty, non-seasonally-dictated ingredients also make this dish a pretty perfect fit for the dregs of winter. Basically, it’s a robust minestrone that has meat standing in for the traditional beans—which sort of defeats the purpose of minestrone, a soup designed by impoverished cooks to repurpose vegetable odds and ends into something resembling a filling meal. But what did my California-born grandmother know of cucina povera? 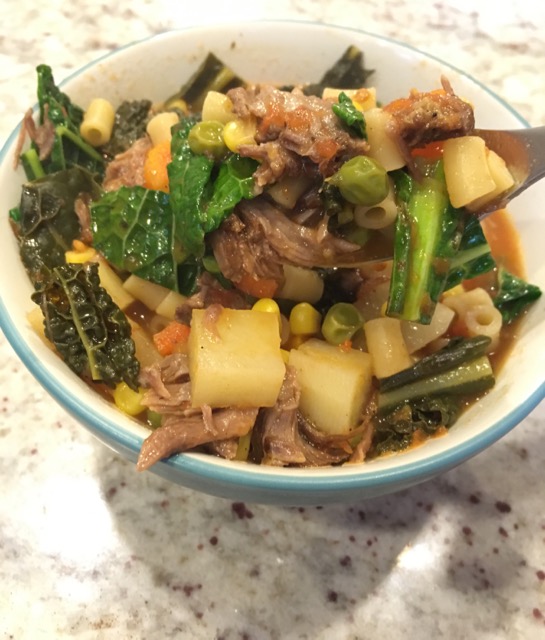 If Punxsutawney Phil is to be trusted, it’s going to stay gross out there for weeks to come. Having a giant bowl of this within arm’s reach might make that news a little easier to take—whether your flannel’s in the wash or not.

1-2 lb. beef short ribs [I did two. YOLO]
6 cups water [This wasn’t nearly enough to cover the amount of vegetables and meat I had in my pot; I ended up adding four more cups, for 10 total]
1 stalk celery, with top
1 turnip, peeled, sliced
2 strips bacon
1-2 onions, sliced
1-2 carrots, sliced
1 parsnip, peeled, sliced
1 bay leaf
1 garlic clove, minced
1-2 teaspoons salt
4 peppercorns
Lawry’s Pinch of Herbs [spoiler alert: this product isn’t sold anymore, unless you want to go down a weird seasoning Google hole. I compensated by using a dash of several different herbs and spices, using this as a guideline]
1 potato, peeled and diced
1 package frozen mixed vegetables [I went with a combination of peas, carrots, and corn, because it seemed like the kind of thing a 60s housewife would do]
Fresh vegetables of your choice [I used just half a bunch of kale, to keep with the general minestrone vibe and to avoid overloading the soup with too much stuff]
1 can tomatoes with juice, crushed
Macaroni (optional)
Chopped parsley

Brown bacon, until crisp and remove from pan. Discard fat. [What? Then… why did we just brown the bacon, again? I did pour off some fat, but left a slick in the pan in order to help the meat brown. Then I ate some bacon.]

Add onions, garlic, celery, turnip, carrots, parsnip, bay leaf, salt, 4 whole peppercorns, and water. Bring to a boil; cover and simmer for about 2 hours, or until meat is tender. Remove meat from pot, cover and refrigerate. [You can also shred the short ribs, or do so the next day, which I did; I figured that would make the soup easier to eat than trying to navigate around giant meat bombs. Altogether, my ribs yielded about 11 ounces of meat.] 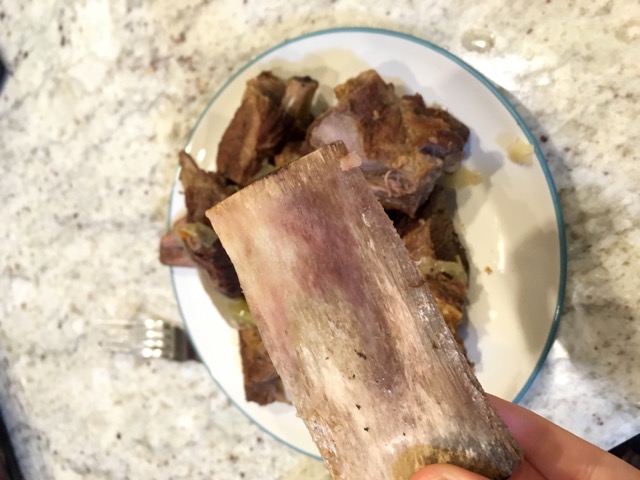 Pour liquid into a large bowl; cover and refrigerate, overnight. [Nonnie doesn’t tell you to discard the solids from the stock you just made, but: do that. The vegetables are mushy and spent, and you’re about to add nice new ones to the broth tomorrow.]

Next day: skim fat from top of broth and discard. Place broth in pot; add tomatoes, Lawry’s pinch of herbs; bring to a boil, cover and simmer for 15 minutes. Correct seasoning; add frozen vegetables, fresh vegetables, including potato, and macaroni, and simmer for about 15 minutes, covered. [I used ditalini instead, because they’re cute and seemed more minestrone-ish; I was afraid of the pasta overcooking, though, so I added it to the pot when there were only about 8 minutes left of cooking time.] Add beef ribs and simmer until vegetables are tender and meat is heated through. 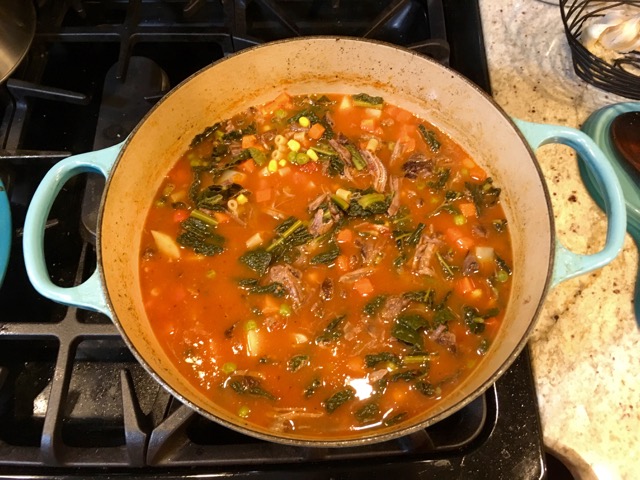 The verdict: The soup was packed with so much stuff that it ended up being more of a stew, even before I filled my pot with a full eight ounces of broth-absorbing pasta. (Learn from my mistakes: use less than that.) If you want something soupier, you should probably augment yours with at least another four cups of stock (and shh—if you use store-bought, I won’t tell).

If you’re comfortable making a broth-based meal you can basically eat with a fork, though, it’s pretty hard to argue against Nonnie’s not-just-vegetable-soup. The recipe is simple and filling and incredibly forgiving, and more a loose set of guidelines than instructions that demand to be followed verbatim; I can see myself switching out the vegetables depending on the season, or trading ribs for another protein (white beans? Sausage? Tiny meatballs?!).

Just make sure, before you dive in, that you’re really comfortable with eating the same thing every day for a week—because while I didn’t measure the recipe’s yield, I believe it was somewhere in the neighborhood of “a fuckton.” Which might be what’s required to drive away those Pacific Northwest blues, but still: caveat souptor. 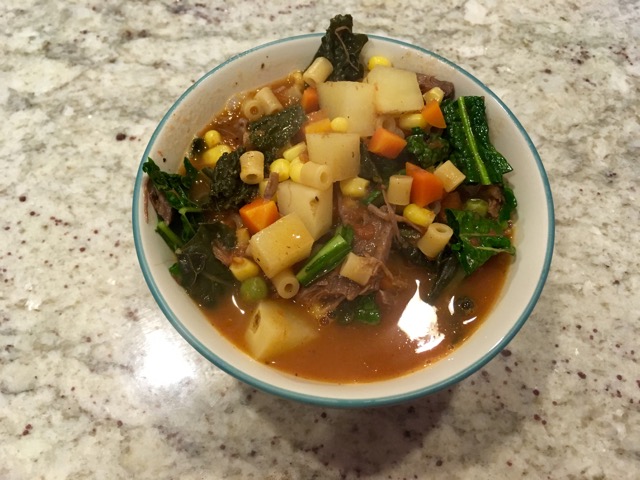