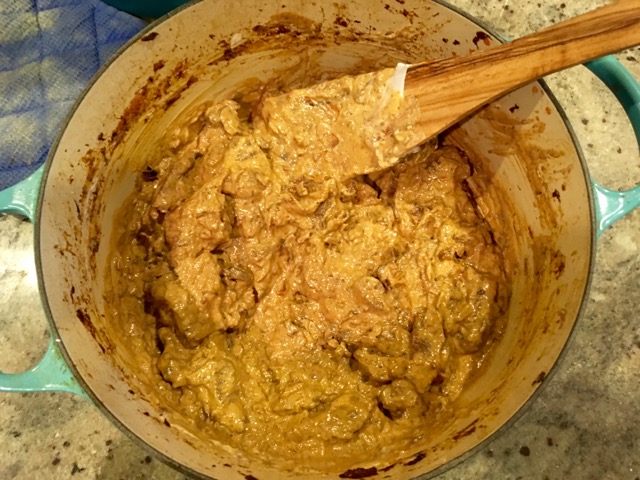 Days after spring allegedly began, it is still blustery and freezing in New York. Though the snowdrifts that still line the streets are no longer stacked toddler-high, they still haven’t entirely melted into murky water; the sky is a stern, White Walker-skin gray; only a certified dummy would dare to venture outside with so much as an ankle exposed (as this dummy personally discovered just hours ago). It is March. The end of March! This is unconscionable and I would like to speak with your manager, sky.

The only way to power through? By making a feast fit for a Romanov, or at least for someone who’s seen Anastasia one or one dozen times. Enter beef stroganoff, a rich dish that’s sort of like a fuzzy fur hat for your insides, a stew enriched with slow-cooked meat and dry sherry (because, of course, this is Nonnie we’re talking about) and, most importantly, a metric ton of sour cream. Yeah, it’s not kosher, but it still feels like Jewish soul food—even if it was probably named for a family of Russian oligarchs who were probably no big fans of the Jews. (I’m speculating here, but that seems like a pretty safe bet.) 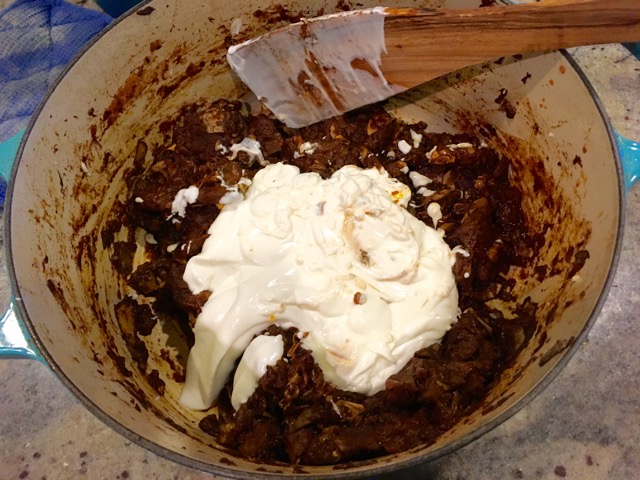 Is Nonnie’s recipe authentic? Eh, who knows; there seems to be very little consensus on what makes a proper stroganoff, probably because the name has been given to several different dishes over the decades. The one in Nonnie’s cookbook, though, hews pretty closely to whatever Americans raised by boomers or members of the greatest generation think of as stroganoff: there’s beef. There’s mushrooms. There’s a vaguely tomato-y gravy. And, of course, there’s a shit-ton of sour cream, because it’s still cold, damnit, so you might as well eat like you’ll never meet another bathing suit. In short: It’s good. Maybe good enough to make you stop shaking your fist at the heavens, at least until you lick your plate clean. 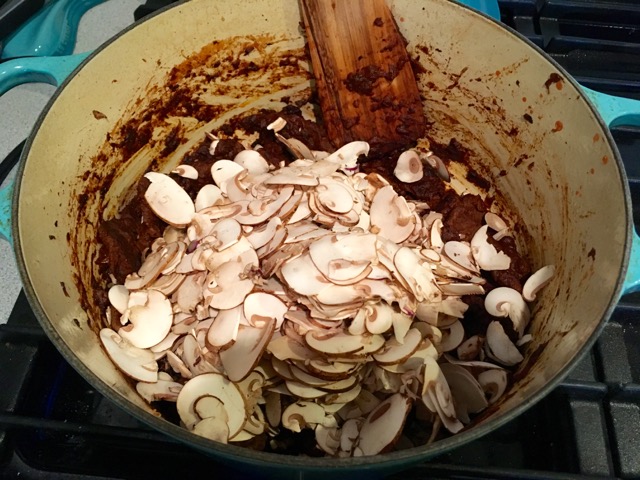 2 lbs. Sirloin tip beef (or other lean beef), cut into strips [What, exactly, is sirloin tip? In New England, apparently, it’s this; in the mid-Atlantic, it’s a lean roast, which doesn’t need a ton of cooking time to tenderize. Pro tip: Make a sturdy-looking butcher cut it into pieces for you, because he’ll definitely do a better job]
3 tablespoons oil
2 onions, chopped
1 clove garlic, minced
1/2 lb sliced mushrooms [What kind? I got the cheapo button type because I’m not the world’s biggest mushroom fan and they seemed easy to deal with, especially when I let my food processor do the slicing for me. Fun fact for those of you who, like me, still find the texture of fungi kinda icky: if you slice them thin, they’ll basically disappear into the sauce, lending it a nice earthiness without any of that gross spongey texture]
1 cup dry sherry
1 8 oz. can tomato sauce
1 bay leaf
1 teaspoon salt
1/4 teaspoon pepper
1 teaspoon Worcestershire
1 teaspoon paprika
2 cups dairy sour cream [I still don’t know what Nonnie knew as non-dairy sour cream, and frankly, I’m not sure I ever want to know] 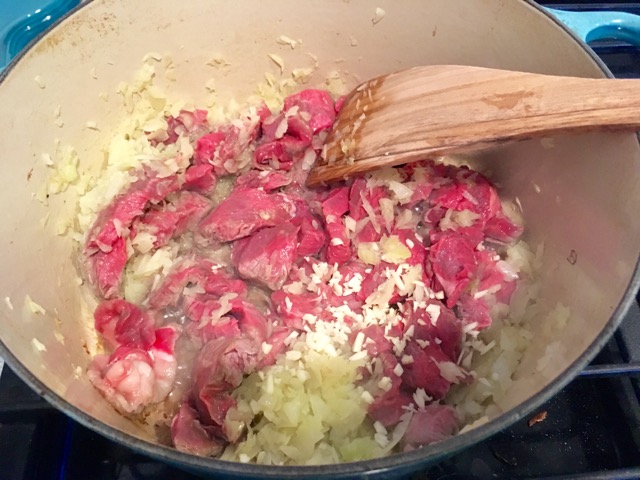 Sauté onions in oil until soft, add meat and garlic and brown meat. [Well, no—don’t do that! Nonnie’s steps are backward: you should first brown the meat in oil to get a nice sear on it, then remove it once it’s done, and add the onions to brown in the leftover fat. Do it Nonnie’s way, and there’ll be too much stuff in your Dutch oven for the beef to sear properly.]

Add bay leaf, salt, pepper, Worcestershire, and tomato sauce. [Do bay leaves do anything, seriously? Can someone please prove their usefulness to me? Please show your work.] Cover and simmer 1 1/4 hour, or until meat is tender. [It… does not take nearly that long. A lean cut like this needs just about half an hour to tenderize, if even that much; if you want to get fancy and serve a stroganoff featuring beef that’s actually rare rather than cooked to death, this might be the recipe for you.] 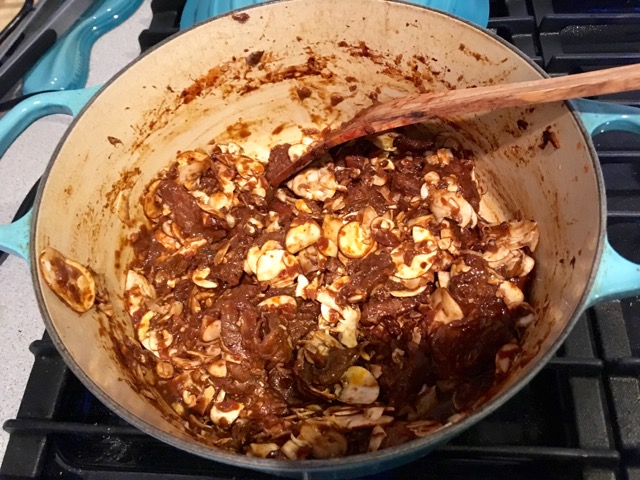 Remove from heat and cool, about 1/2 hour. Add mushrooms and sherry. Reheat and cook for about 20 minutes. [Why the cooling and the reheating? Who knows! Stroganoff is a puzzlement.] Remove from heat and cool. Just before serving, add sour cream, mix well, and heat through, stirring occasionally. Do not allow to boil. [This step, at least, makes some sense: it’s intended to keep the sour cream from curdling/separating due to the heat of the stroganoff. A Russian oligarch would never allow such a thing.] 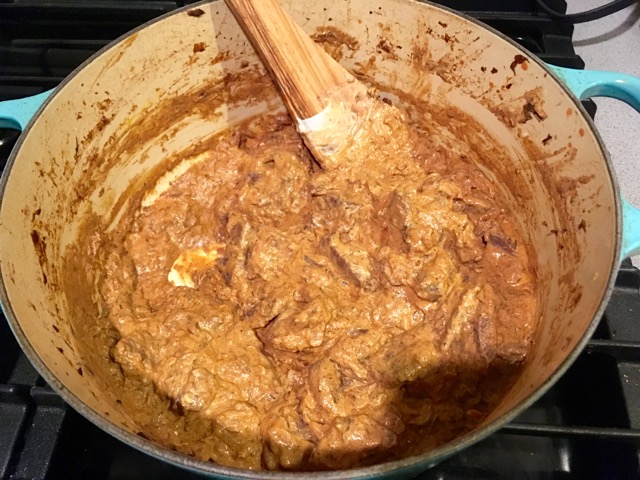 The verdict: Is there perhaps a smidge too much sour cream in this stroganoff? Possibly. Could there be more non-sour-cream gravy, to up the savory factor? Sure. Was the beef maybe a little dry? Yes, but you’ll hardly notice, thanks to all that sour cream. (Maybe that’s why it’s there?) In short, this may not be a perfect dish—but when you’re tearing through a mess of it piled on top of a tangle of buttery, hot egg noodles on a cold, cold night, you’ll hardly care.

Stroganoff is not cool; it is not sophisticated; it is certainly not going to win any beauty pageants. It is, however, pretty goddamn delicious—enough so that six generally healthy-minded adults devoured the entire damn pot full in about 20 minutes flat. There were no leftovers—which means, I suppose, that if the weather insists on persisting, I might just have to make it again. 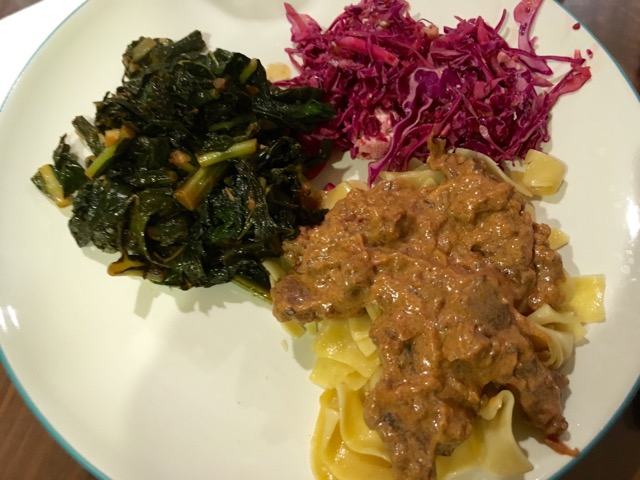