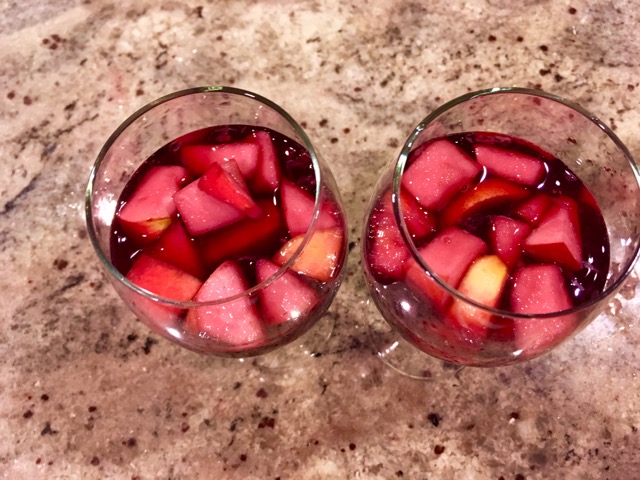 Five years ago, I met a boy in Madrid. That sentence—true as it may be—makes our origin story sound a lot more romantic than it actually is. Our eyes didn’t lock from across the floor of a crowded flamenco bar; I had no rose in my hair, and he had none clutched between his teeth; we didn’t spend hours holding hands and whispering sweet nothings to each other, dwarfed by the shadow of the Reina Sofía and, like, a matador. We didn’t, in fact, even start dating until several months later, when we’d both returned to the city where we actually lived: loud, dirty, less-than-exotic New York.

Even so: Five years ago, I met a boy in Madrid. In less than 18 hours, we’re going to get married—in a place that is perhaps the opposite of Spain. (Let’s go, Stillers!) The traditions will be a hodgepodge of Ashkenazi Jewish and Italian-American Roman Catholic; the menu will be decidedly New American; the vibe will be pure yuppie Brooklynite, as much as it may pain me to admit that.

Before taking the plunge into all that, though, I decided to toast the two of us with a drink that reminded us of where it—where we—began. It’s not fancy; it’s not fussy; it’s more likely to remind you of every bar you’ve ever visited than it is to inspire thoughts of sultry Barcelona nights. But maybe sometimes, backstory means less than the final product itself—which is perhaps the signal for me to stop pushing this tortured metaphor and start just telling you about the booze already.

1/2 each: sliced lemon, orange, lime [Have I mentioned I hate oranges? I do; I used extra lemon and lime instead to compensate.]
1 fifth California Burgundy (Red) [Psst: There’s no such thing as California Burgundy! Burgundy is a region in France; California, you may be surprised to learn, is not. A cursory Google helped me figure out that here, Nonnie’s falling into the old-fashioned, déclassé convention of simply calling any red wine “burgundy;” as such, you can use basically whatever sort of red you feel like to make this sangria. I went with pinot noir, obviously.]
1/4 cup brandy
1/4 cup cointreau [See note above about my feelings toward oranges. Since sangria can be boosted by pretty much any liquor, I chose St-Germain, mostly because we already had some left over from… the last time I made sangria.]
1 small bottle club soda
2 tablespoons sugar
Slices of any fruit desired and/or strawberries [Why does Nonnie phrase this as though strawberries aren’t… fruit? In any case, I went for a few handfuls of mixed berries, as well as a chopped-up apple.]

The verdict: There are as many ways to make sangria as there are pig legs hanging from the ceiling at the Museo de Jamon; the basic formula (wine + fruit + sugar + extra booze + bubbles, and even those are optional) is endlessly forgiving and adaptable, not to mention easy to follow for those of us who still haven’t really mastered even simple cocktails. (Raises hand.)

The only thing that matters in the end, really, is that the drink be cold and sweet—oh, and that there be plenty of booze-soaked fruit to scoop up with a fork once all the liquid has been drained from your glass. And on those counts, Nonnie’s no-fuss take is a smashing success. 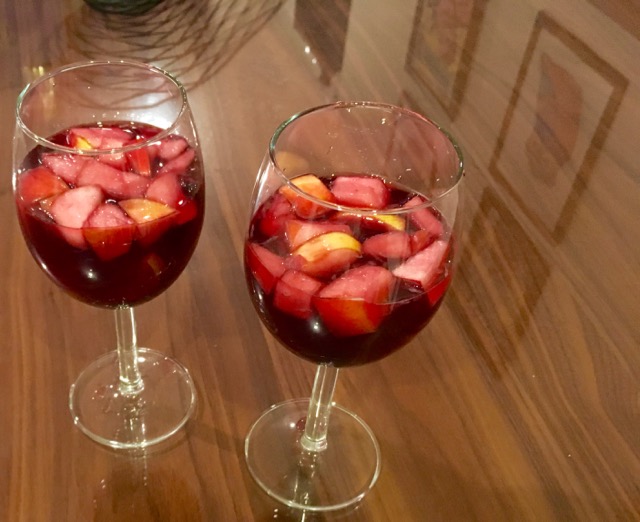 I always sort of thought it was bullshit when I heard someone praise an alcoholic beverage by calling it “drinkable”—what exactly did you think we were going to be doing with the drinks, Sherlock? But sipping this sangria made me understand what that term actually means: it’s light, refreshing, not so laden with sugar or brandy that you’ll be down for the count after a glass or even three. (The amount of club soda diluting the stuff definitely helps.) And if you’re, say, trying to detox before an event in which everyone you’ve ever met will be staring at you for hours on end, drinking it will not make you feel like you’ve inadvertently hit the reset button.

It may, however, inspire a certain degree of wistful sappiness—depending on how closely your own life resembles the story that Michael Jackson half-tells during the breakdown of “Remember the Time.” (“Do you remember, girl? / On the phone, you and me / Till dawn, two or three / What about us, girl? / In the park, on the beach / You and me, in Spain…” I do, Michael. I really do.)