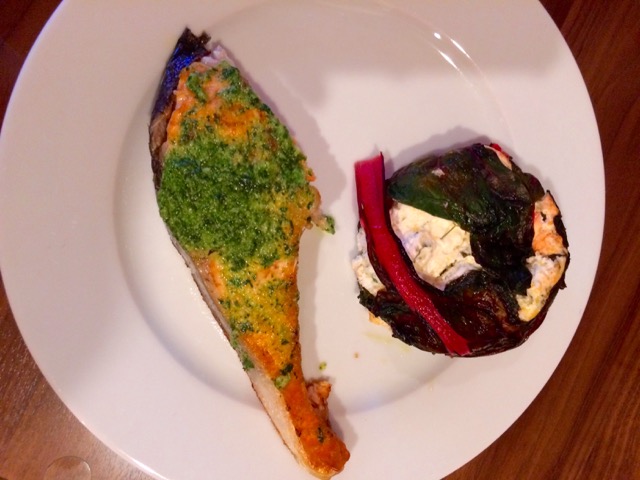 If my mom had a mantra, it would probably be “I forgot my mantra,” à la Jeff Goldblum in Annie Hall.  Her true mantra, though, would be something a little more quotidian and practical: “All I want, when I sit down to dinner, is a big salad and a simply-cooked piece of fish.”

She’s fibbing, of course. She really wants a bone-in ribeye with shoestring fries, and when she’s finished with the steak, she wants to pick up that bone with her bare hands and gnaw every morsel of meat from it, maybe sucking out the marrow at the end as a grand finale. But because she is not Don Draper—and because keeping kosher means most of the time, when you eat at home, it’s just easier to leave meat out of the equation altogether—more nights than not, she ends up with a big salad and a simply-cooked piece of fish. 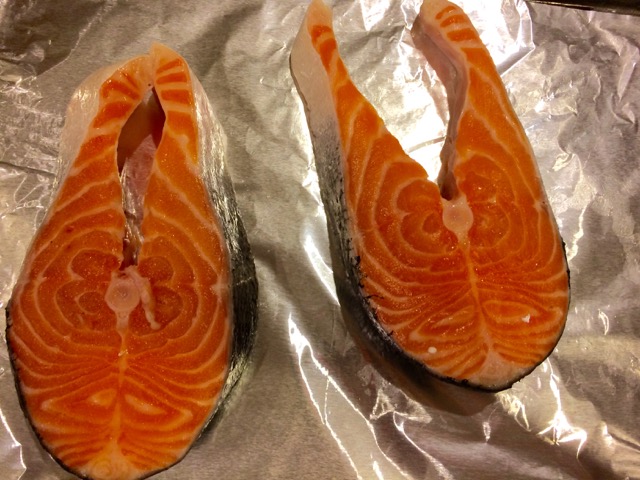 I thought, perhaps, that this Nonnie recipe—the second of two methods for broiled salmon; yes, I cooked no. 2 before I cooked no. 1; yes, I’m a loner, Dottie, a rebel—might be able to square the circle. It’s a simply cooked cut of fish that’s also allegedly a steak; eating it, I thought, might give the same sort of primal satisfaction one gets from slabs of animal that don’t come from the sea.

I was wrong, of course. Have you ever actually eaten a salmon steak before? Because it’s a decidedly weird cut, one that bridges the gap between fillet and whole roasted fish but carries the biggest downside of the latter (lots of teeny, irritating bones) without its major perk (beautiful presentation; there is nothing beautiful about a salmon steak). The upside is that salmon steak is considerably cheaper than a salmon filet, enough so that I wasn’t complaining too much about all the fish bones I pulled out of my mouth while eating it, like a cartoon cat.

It won’t give you the carnal thrill of my mother’s real most-wanted meal—but that slight frisson of danger (you could choke on those bones! How thrilling) does make this perhaps slightly more interesting than the average salmon. 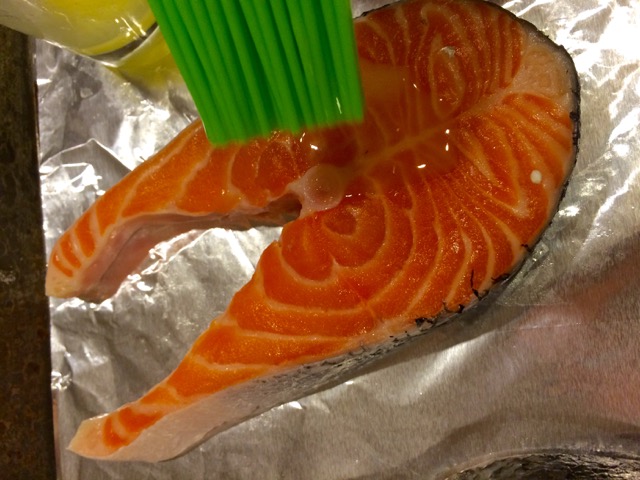 Salmon steaks, 3/4-1″ thick [I used two, and they came out to be around .7 pounds each—more than enough for two people, probably fine for four as long as you’ve got sides]
1/3 cup oil
1/2 cup chopped parsley
1 teaspoon salt [note: this is way too much salt]
4 cloves garlic, crushed
1/4 teaspoon dill weed [heh heh heh]
1/4 cup butter, softened

Combine oil, garlic, parsley, dill, and salt in blender. Place salmon in well-greased broiler pan and brush with butter. [If your fish is cold, but your butter is warm because you just melted it, it will look like this, which is kinda gross:] 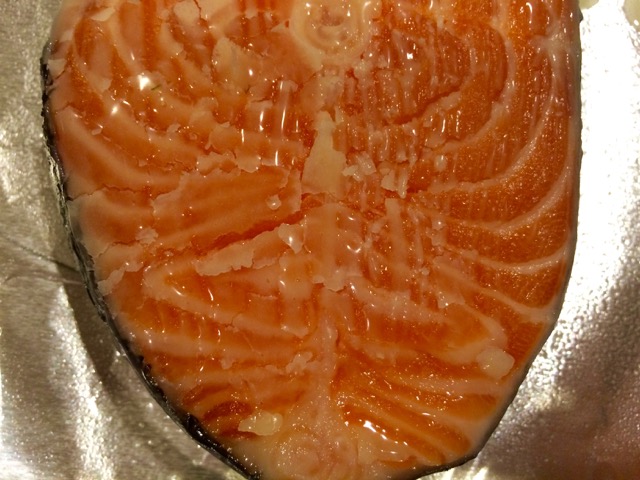 Broil about 4″ from source of heat for 8 minutes, or until fish flakes easily when tested with a fork. [I took mine out slightly earlier than that, because it was already starting to get a little crispy; maybe my broiler’s just strong?] Spread about 2 tablespoons of garlic mixture on each salmon steak and return to broiler. Broil about 1-2 minutes longer or until lightly browned. 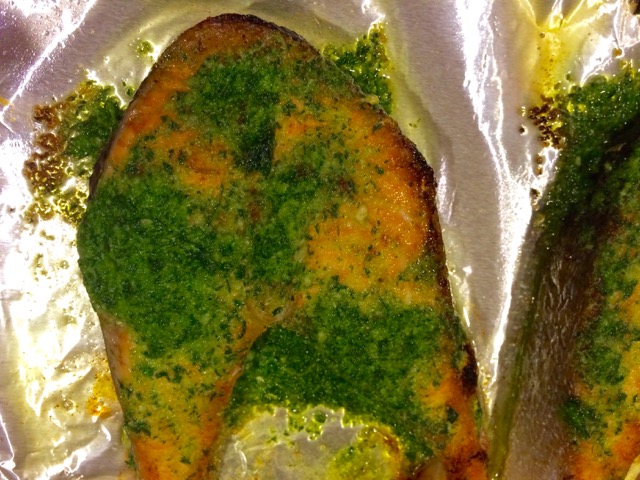 The verdict: You know, salmon’s salmon—though this particular cut is fattier than a fillet, which made the fish taste richer. (Or maybe that was just the butter talking. Related note: This recipe definitely doesn’t need butter.)

The herb pesto that went along with it was, of course, way, way too salty, but cutting that amount by half would have yielded a punchy, verdant sauce that would have complemented the salmon well; and Nonnie’s instructions as written do yield a well-cooked piece of fish, pin bones be damned. All in all, it made for a satisfying summer dinner, especially when paired with these chard-wrapped Greek yogurt pies—a little more involved than either making a big salad or ordering a mound of shoestring fries, but well worth the extra effort.