I was raised to prize homemade desserts over the grocery store kind, to always choose a slightly misshapen, even over-or-underdone chocolate cookie over a perfectly round, pale yellow circle with impeccably spread, machine-made icing. (Unless we’re talking about an Eat’n Park smiley face cookie, in which case all bets are off.) Desserts made from scratch are just better, my mom always said, and I’m sure she got that from Nonnie before her—they’re less sweet, more complex, filled with the rich, satisfying taste of real butter.

I still believe all this to be true. However: For those awful moments when, whoops, you’re feeling snobby and superior but don’t actually have time to whip up an entire cake from scratch (perish the thought!), there is in fact a decent halfway solution.

Enter the section of Nonnie’s cookbook called “Cake Mix Cakes,” which features a selection of recipes that hinge upon jazzing up a box of Duncan Hines cake mix—”use only Duncan Hines,” she warns, and it’s underlined, so you know she’s serious—with a variety of things, some just as artificial as the mix, some not. The one we’re making today glops together a box of cake mix, a container of sour cream, a box of chocolate Jell-O, some chocolate chips, and four—count ’em—four eggs. It is, in short, a sort of convenience-food-plus-fat monstrosity, pure mid-century in temperament even if the recipe seems identical to one first published in a cookbook that came out in 1999.

But you know what? It’s also delicious, moist and tender and rich enough to make you forget that it’s not exactly homemade in the traditional sense. I made a ginormous 9″x13″ rectangle for a group of nine friends; by the end of the night, we’d basically demolished it. By the time I remembered I should be taking pictures, the only slice I had to show you was that cake’s sad, misshapen leftovers—which, honestly, you should take as more of an endorsement as anything else. (So good it’ll make you forget about your food blog!)

It’s not local, it’s not natural, and it’s sure as hell not healthy—but somehow, after your first bite, I don’t think you’ll mind.

1 box Duncan Hines fudge cake mix [Can you use another brand? Sure, probably. But just know that it will not be Nonnie-approved]
1 small box chocolate pudding
1 cup sour cream
4 eggs
1/2 cup water
1/2 cup cooking oil [Any neutral-flavored oil will do; I went with Crisco, for maximum ’60s style]
1 small package semi-sweet chocolate bits [Or, you know, “chocolate chips,” as they’re colloquially called. I couldn’t find a small bag, so I ended up using half of a regular-sized one instead. And I bought the fanciest kind in all of Key Food, because I’m worth it.]

Mix all ingredients (except chocolate bits) together. Beat for three minutes at high speed, continually scraping. [Or mix real good with your arm and a wooden spoon, like the pilgrims would have. It’ll take some elbow grease, but just keep mixing, and eventually it’ll stop looking like a mess of disparate ingredients and start looking like a shiny, uniform brown goop.] 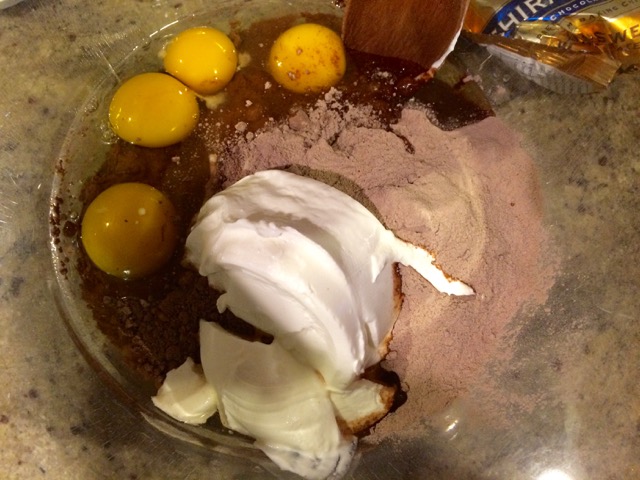 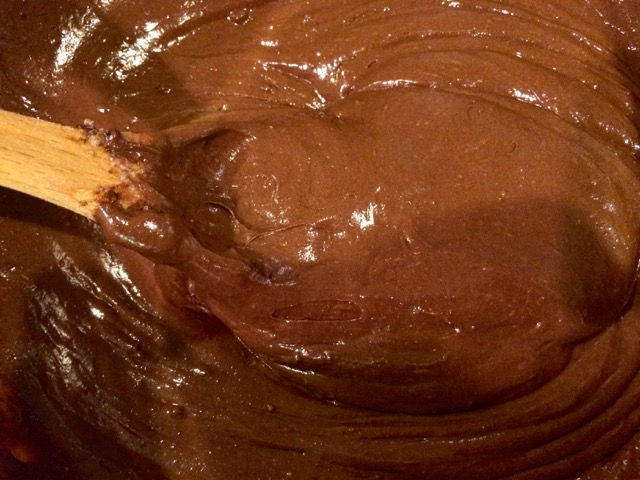 Add chocolate bits. Mix well. Pour into greased 9″ bundt pan. [Whoops again: I don’t have a bundt pan, and I wasn’t going to buy one for just one recipe. So I baked it in a regular sheet pan, which worked just fine.] Bake 1 hour at 350.

The verdict: Much, much better than it had any business being, especially when gussied up with some easy buttercream icing and maybe a piece or two of fruit (healthy!). Don’t let the photo of a sad leftover slice fool you: this cake is good, good enough that I’d maybe willingly make it even if I did have the time to bake something more legitimately homemade. Just don’t tell that to my mom.