My darling readers — all 10 of you! — I have a confession to make: Nonnie’s cookbook actually contains more recipes than the ones that appear on this list.

See, the binder’s front cover has a pocket, and within that pocket, there’s a small stack of  loose papers — Post-Its, yellowed newspaper clippings, handwritten notes scribbled on pages torn from a “Memo from the Big Cheese” pad.

Save one clipping that contains tips for hand-washing silk clothing — did you know you should wash it separately in lukewarm water with a gentle detergent? — these pages mostly contain recipes. And of those recipes, most are for matzoh balls. (Nonnie was tortured by her quest to make the perfect matzoh ball, but we’ll get into that come Passover-time.)

The others are a mixed bag, covering everything from a pumpkin cheesecake that’s cooked entirely within the microwave (blech) to a vaguely Chinese chicken salad that looks a whole lot like the filling for P.F. Chang’s lettuce wraps. (Which is to say, I will make it someday, and I will almost certainly love it.)

The first time I flipped through Nonnie’s cookbook, I was surprised to find that the only meatball recipe it contained was a gross-sounding appetizer that combines ground beef with Heinz chile sauce and Welch’s grape jelly. (I know I’ll have to make them someday, but… blech squared.)

As it turns out, though, the more traditional Italian-style meatballs were just hiding out among the pocket recipes — which is a shame, because they deserve to be center stage. Provided the stage is made of garlic bread.

1/4 cup minced garlic [Yes, it’s a lot of garlic; yes, you shouldn’t be tempted to use less]
Olive oil
2 lb. tomatoes [An annoying measurement, since tomatoes tend to come in cans that are either 28 ounces (i.e. 1.75 lbs) or 14 ounces (.87 lbs). I followed the letter of Nonnie’s law, but next time I’d just use one big can and one small can. You can never have too much sauce, right?]
Basil
Parsley [A handful of each herb should do the trick]
Water [Included in the ingredient list, but not the recipe itself. Maybe you’re supposed to use it to thin the sauce? Either way, don’t; you want something thick and deep red and richly reduced]

Cook pasta and drain. [Or don’t! I didn’t, because I was serving these as a side dish for this pizza, and I wanted to avoid carbs on carbs on carbs. Side note: You should absolutely make this pizza.] Mix pasta with sauce and meatballs.

Garlic [No amount specified, but I added two cloves. Yes, even though there was a buttload of garlic in the sauce]
Salt and pepper
Parsley [Go for another handful, unless you’re, like, weirdly into parsley and want more]
1/2 cup bread cubes [What kind of bread? I went with a crappy Italian loaf from the supermarket, because I don’t really think there’s any point in using good bread in a recipe where it’s just being used to bind something else together. I was left with most of a loaf, which I didn’t know what to do with… until I had the brilliant idea to turn it into garlic bread. This was obviously the right decision]
1/3 cup milk
1 egg, beaten
1 lb. ground meat [I went with half beef and half pork]
Parmesan cheese [No amount given, so I added 1/4 cup, using this recipe as a guideline]

Mix milk and egg. Pour over bread cubes and soak for 20 minutes. [Just so you know: 20 minutes is underlined.] Mix meat with other ingredients [including soaked bread, duh] and make small meatballs. [I ended up with 22 total. How big were they? I don’t know because I didn’t measure them, nerd.]

Brown meatballs. [Nonnie doesn’t specify how she wants you to brown your meatballs; she probably figured you’d do it on the stovetop, in a pan. But because I find pan-frying meatballs messy and difficult, I used the broiler instead, placing an oven rack on the second-highest setting and browning the balls for five minutes on each side. Next time, I’d probably do four instead, since they continue to cook in the sauce.] 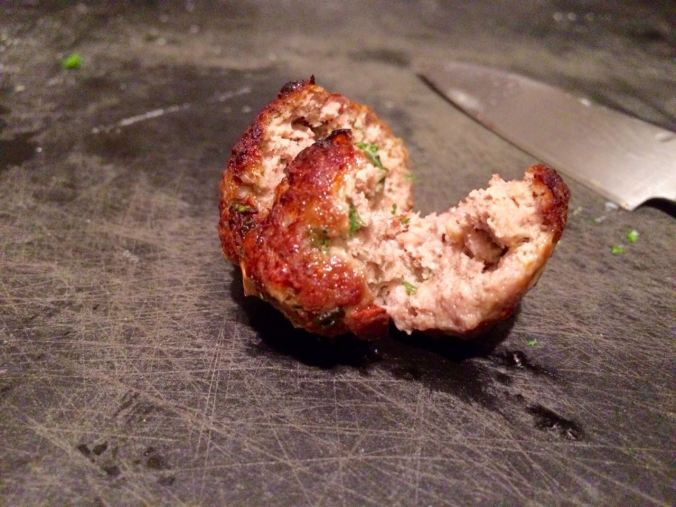 The verdict: As you might be able to tell from the picture above, the meatballs were cooked through — and a little dry — straight from the broiler. (And since I chose to use that browning method, I have nobody to blame but myself.)

Thankfully, a nice, long sauce bath helped them regain some of the moisture they’d lost, leaving me with meatballs that had a pretty ideal consistency — nicely browned on the outside, tender within.

Oh, and speaking of that sauce: Insert Homer Simpson drooling noise here. True, you can’t really mess up tomatoes cooked low and slow — but this version proves that you don’t need a whole bunch of butter or 85 ingredients and 6 hours to make a sauce that sings.

It might have been even more delicious if it’d cooked even longer… but it also would have been cruel to delay it from getting onto my friends’ plates as soon as possible.