It’s Valentine’s Day. It’s 9 degrees (in New York City, at least). It’s Day 2 of a three-day weekend. Do you need any more excuses to spend the afternoon inside, doing nothing in particular besides mixing, baking, frosting, and consuming a chocolate cake that you may or may not decide to share with someone else? Let’s go ahead and say that you don’t — especially if you, like me, wouldn’t usually bother frosting a homemade cake.

I’m one of those weirdos who doesn’t really like icing, unless it’s mostly made of cream cheese (because I am only human). Generally, though, I think it’s a one-dimensional sugar bomb, a stiffly flavorless barrier standing between me and whatever dessert I actually want to be eating (cookies, cake, cookie cake).

Nonnie’s take on chocolate frosting, though, isn’t that at all — probably because it isn’t a typical buttercream made of nothing more than butter and confectioner’s sugar. 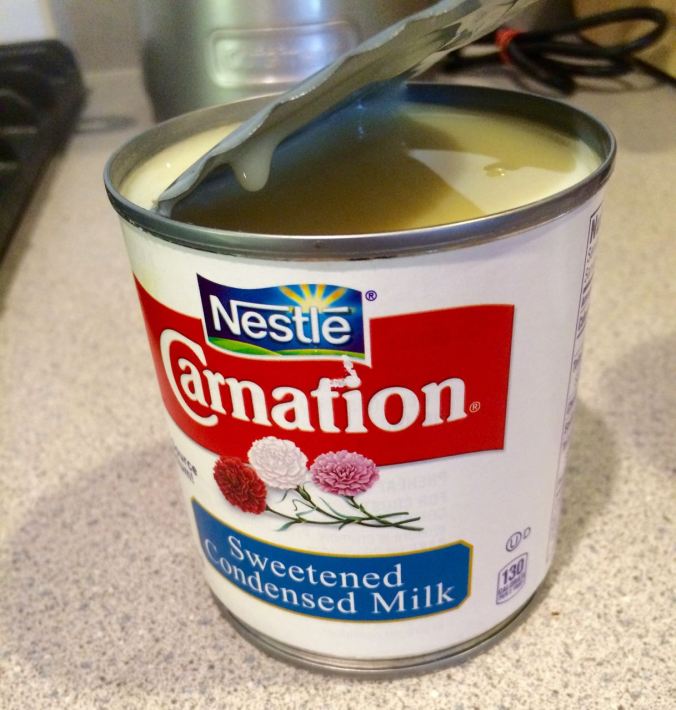 Instead, she has you frost your chocolate cake with  a simple mixture of unsweetened chocolate, vanilla extract, and — this is crucial — sweetened condensed milk, a thick, ambrosial semi-liquid that I’d never cooked with before making this cake.

I don’t know whether a profoundly artificial, shelf-stable concoction can really be considered “milk;” I certainly don’t intend to start eating it on the reg. When it comes to making icing, though, this stuff is the business. It creates a topping that’s fudgy, gooey, and altogether addictive — more ganache than icing, really, which is just fine if you’re an icing agnostic like me.

That said, it does spread well if you’re patient, enabling you to turn a simple chocolate cake into something slightly fancier and/or more whimsical — but we’ll get there.

Combine water, oil, and chocolate in top of double boiler and heat until chocolate melts. [Meanwhile, in another bowl:] Beat eggs and add sugar gradually. Add sour cream and vanilla.

[Then, in a third bowl:] Sift flour, salt, and soda together. Gradually mix in 1/3 of flour mixture, alternatively with part of cooled chocolate mixture, ending with flour mixture.

[That sounds a little confusing now that I’m reading over it again. So let’s revise: Alternately mix flour and chocolate into sugar/egg/sour cream mixture, incorporating new ingredients into batter fully each time before adding more. It’s a little fussy, and I suspect that if you were in a hurry, you could probably just dump everything into the same bowl without sacrificing the cake’s texture.]

Mix only until flour is blended. Do not overbeat. [It might look a little gritty, but don’t worry — it’ll all come out in the oven.]

Pour into greased 9″x13″ cake pan. [And go heavy on the greasing — this cake wants to stick on you. Don’t let it.] Bake at 350 for 40-45 minutes. Cool on rack and top with chocolate frosting. [Oh, and allowing the cake to cool in the freezer for awhile will make the frosting step a lot easier.]

1 can sweetened condensed milk
2 oz. Baker’s unsweetened chocolate [Annoying thing alert: Baker’s chocolate comes in 4 oz. bars, but Nonnie’s cake recipe calls for 5 ounces. Ugh. I might try adding more chocolate to the cake and/or the frosting next time in order to evenly use up two bars, which I think would only have a positive effect on each of their flavors; as written, both are chocolatey but not overwhelmingly so]
Hot water
1/2 teaspoon vanilla 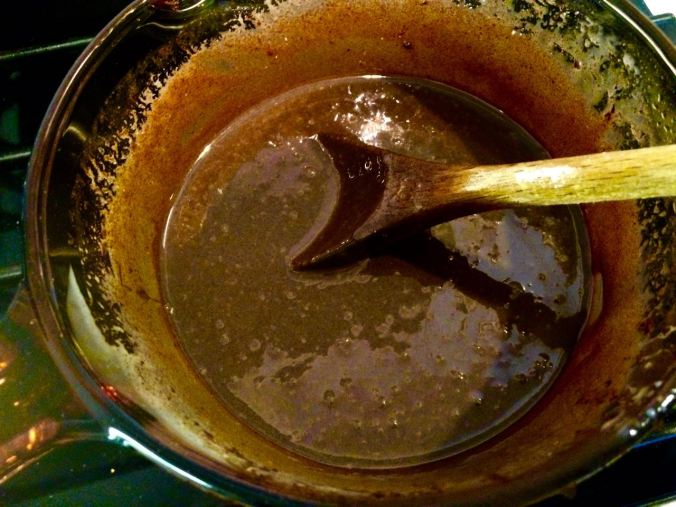 Combine milk and chocolate in tip of double boiler and cook over hot water until thick (about 10 minutes). If too thick, thin with hot water. Cool. Add vanilla. Mix until smooth. Spread on cake.

The verdict: You already know how I feel about this icing. The cake itself — flavorful but light enough on chocolate to come out with a reddish hue — tastes like it was made with a packaged mix, and I mean that in the best way possible. It’s extra moist (thanks to the oil, I suspect) and tender, but still has the structural integrity to form layers, if that’s your jam — though you’ll want to wait until each one is fully cooled before trying to remove it from the pan, unless you want to be left with this:

Even if that happens, though, all is not lost; frosting can fix a multitude of woes, including but not limited to a broken cake. (Plus, if you just flip it over, literally nobody will notice that the bottom’s messed up.)

… removed the middles (for later snacking), and pushed together the resulting halves…

… frosted the bottom layer and topped it with the second… 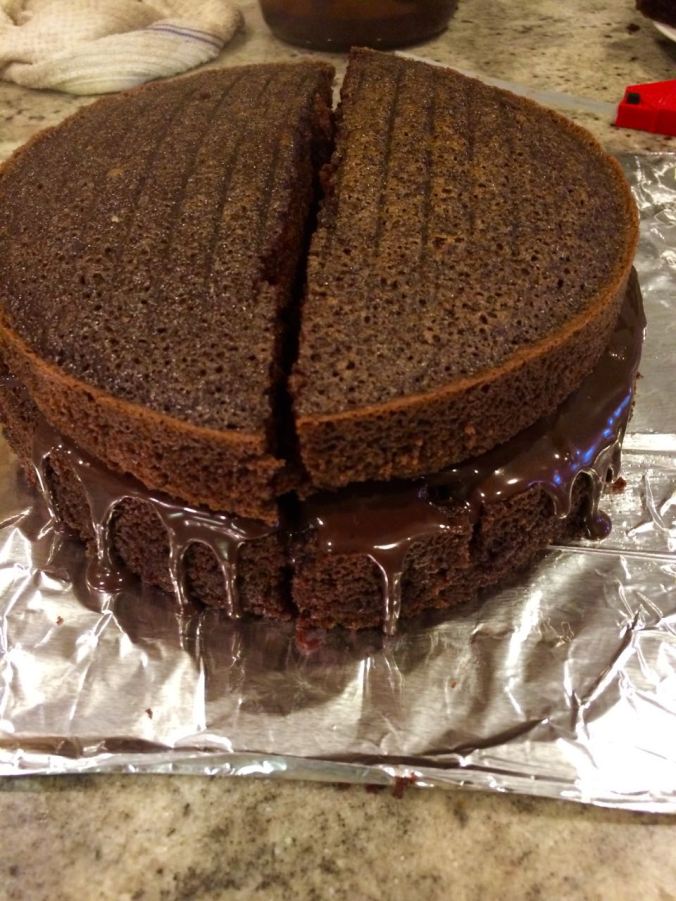 … slopped on more frosting, whipped up a half recipe of white buttercream icing, and used it to create…

It wasn’t perfect; Nonnie’s icing wasn’t quite sturdy enough to conceal the crevasse in the middle of the cake, and the buttercream didn’t always stay put either (as you can see from the photo above). It looked a lot more homemade than the cake I used as inspiration, maybe because I used a Ziploc bag to pipe on icing instead of a fancy, bakery-style piping bag.

But you know what? It tasted good enough to get gobbled up even though the Super Bowl party’s spread also featured an ice cream cake — which I take as a pretty solid endorsement. Given that, just imagine what it could do for your Valentine’s Day — especially if you bake it in the shape of a heart instead of a football.