Hawaii had a hold on Nonnie. She and my grandfather took my mother and her brothers to the Mauna Kea Beach Hotel shortly after its grand opening in 1965; at the time, it was allegedly the most expensive hotel ever built. The trip made such an impression on her that 50 years later, my mother and I discovered that Nonnie had saved the menus from every single meal her family had eaten on that vacation.

I didn’t take any pictures of those menus, because I am a dummy. However! I’m pretty sure none of them featured this chicken, which is basically Shake ‘n Bake with a can of pineapple dumped on top.

Okay, that’s not fair. The chicken tasted a lot better than I feared it would, and also better than this picture makes it look. Smothering a bird in a fruit that’s 87 percent water, then baking it in a foil-wrapped pan makes for exceptionally juicy meat — I was surprised by how much moisture it retained, given Nonnie’s recommended cooking time.

Unfortunately, the same moisture that ensured a great texture also turned my beautifully browned skin into a soggy, unappetizing mess — to the point where I wonder why Nonnie had bothered including the shake ‘n bake step in the first place. (A quest for extra calories?)

So maybe we should call this one a wash. On a scale of Hawaiian vacations as portrayed by sitcom episodes, I’d put it somewhere between Saved By the Bell: Hawaiian Style and Full House‘s “Tanner Island” — neither wonderful nor an unmitigated disaster. 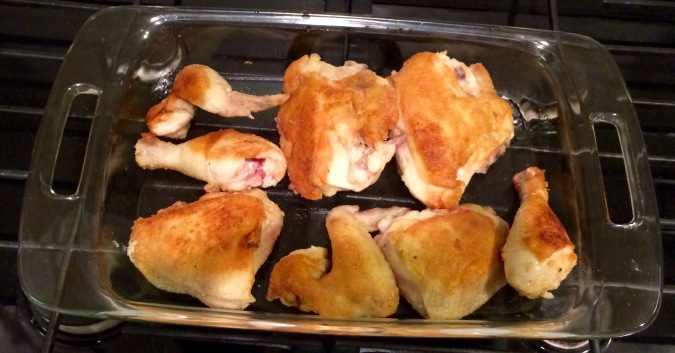 1 fryer, cut into 8 pieces [Chicken vocabulary time! A fryer is a young, small chicken, one not larger than 3.5 pounds. Or at least that’s what the Internet has led me to believe; when my boyfriend Mikey asked for a fryer at our local (generally excellent) butcher, their response was “What the hell are you talking about?]
Salt and pepper
Garlic powder
Flour
1/2 teaspoon nutmeg [Why give a precise measurement here, but not for any of the other ingredients in the flour dredge? It’s a mystery, and that’s why so is mankind]
1 can crushed pineapple, drained [You know how much juice you get as a result of this step? I believe the correct mathematical term is “a buttload.” Which, by the way, is a hidden bonus to this recipe: You get a delightful beverage to sip as you’re waiting for the chicken to be done.]
4 tablespoons soy sauce
1 teaspoon sugar

Wash chicken and pat dry. [I cheated here by skipping that first part, because we’ve learned a lot about food safety since Nonnie’s day — and washing chicken is an excellent way to spread gross chicken germs all over your kitchen.]

Place chicken, 2 pieces at a time, in bag with flour mixture, and shake to dredge chicken. Brown chicken in 4 T oil in a large skillet. [Cursing as the hot oil spits at you is optional. It took me maybe 5 minutes per side to get nice color on each piece of chicken.] 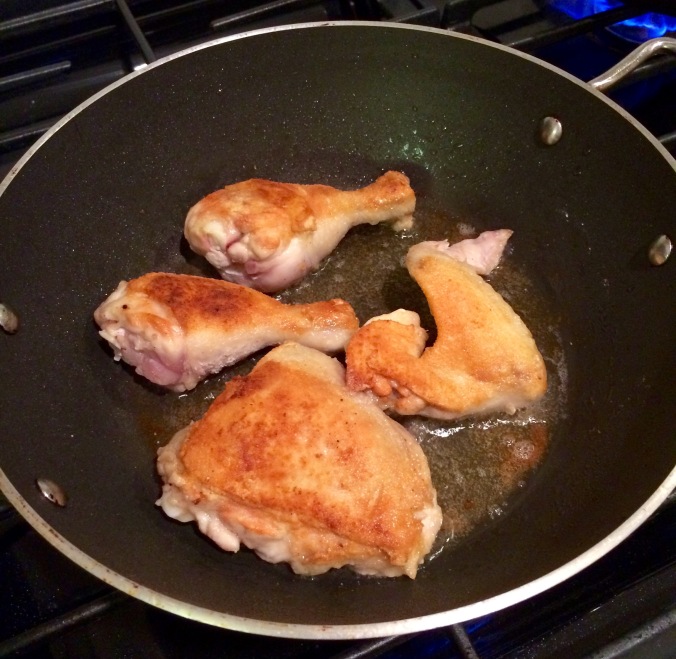 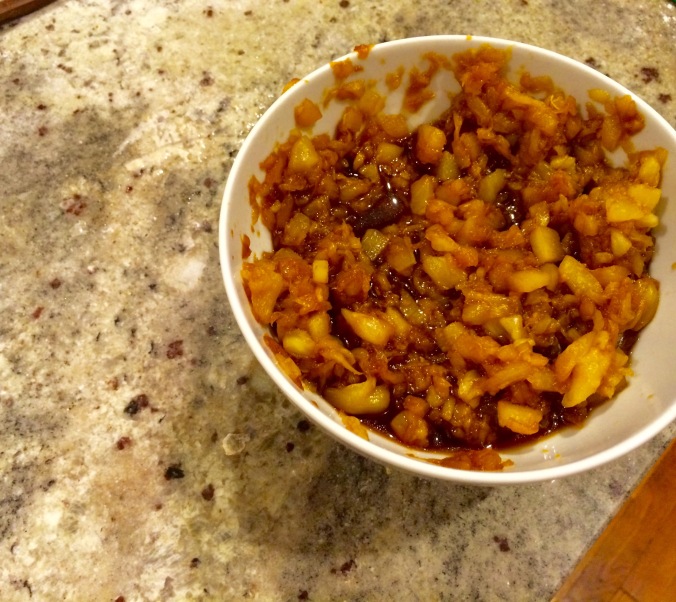 Pour over chicken. Cover chicken with foil and place in a pre-heated 350 oven. Bake for one hour. Serves 4. 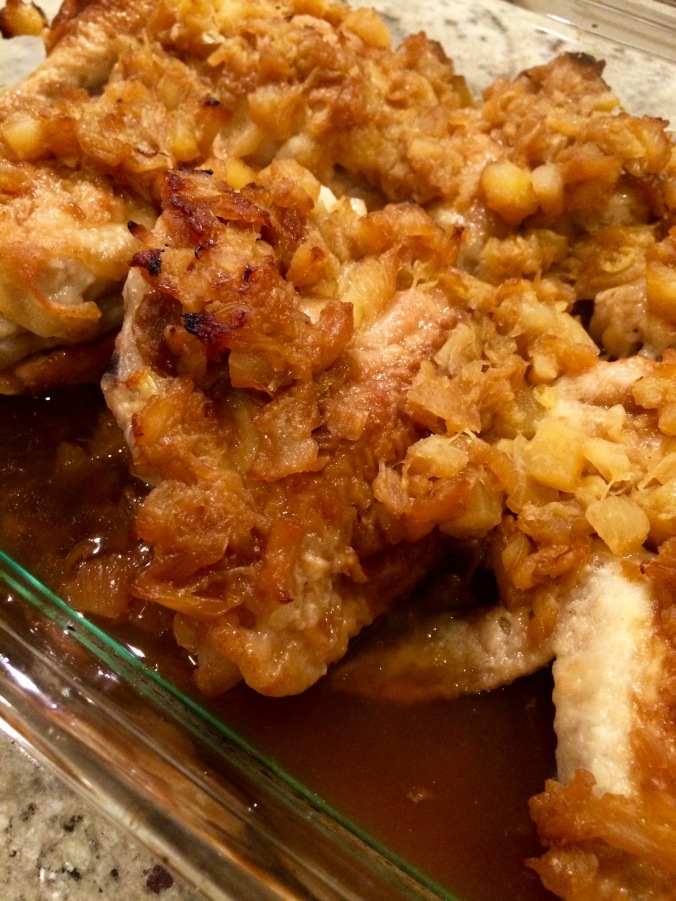 The verdict: Like I said up top: good meat, soggy skin. Covering the pan in foil also prevented the sauce from reducing and caramelizing, which would’ve added dimension this dish is sorely lacking. Four tablespoons of soy sauce aren’t nearly enough to balance the sweetness of 20 ounces of pineapple; I also couldn’t really taste the spices I put in the dredge.

Maybe it would’ve helped to remove the foil, scrape off the pineapple, broil the chicken to re-crisp its skin, and cook down the pineapple sauce on the stove until it was reduced and concentrated — but I can’t tell you either way, since doing that only just dawned on me.

But! I can say that Mikey and I ate the chicken with this Thai celery salad, which was bold, crunchy, and fresh enough to serve as a decent counterpoint to the chicken’s bland, one-note sweetness. (The Veronica to its Betty, if you will.)

I can also say that leftover Hawaiian Chicken is great over rice cooked with coconut milk, stock, and cilantro… once you remove the skin and pineapple mush. Which, I guess, just makes it “chicken” in the end.

One thought on “Hawaiian Chicken”