Here are a few reasons fish (and carrots!) en papillote (or en aluminum foil, a la Nonnie) should be in your regular meal rotation, particularly this time of year:

The method is simple. All you have to do is place fish and/or vegetables onto a large piece of foil or parchment paper, add some flavoring agents and a little bit of liquid or fat, then carefully seal the foil or paper to make a tasty little package. Its contents will gently steam in their own liquid (and whatever liquid you added) after being slipped into the oven. Nonnie’s instructions helped me make some of the tenderest fish I’ve ever cooked myself, and a pretty tasty batch of carrots as well—even though I’ll probably tamp down the butter if and when I take another stab at either of these recipes.

Then again, if I’m making them for company, what the hell; maybe I’ll add even more butter! That’s the real beauty of en papillote cooking: you can end up with a final product that’s decadent or virtuously austere, bursting with flavor or chicly simple, dinner-party-perfect or weeknight-ready. As a wise, possibly racist talking styrofoam head once said, the choice is yours, and yours alone. But if you want to do what I did, here’s how. 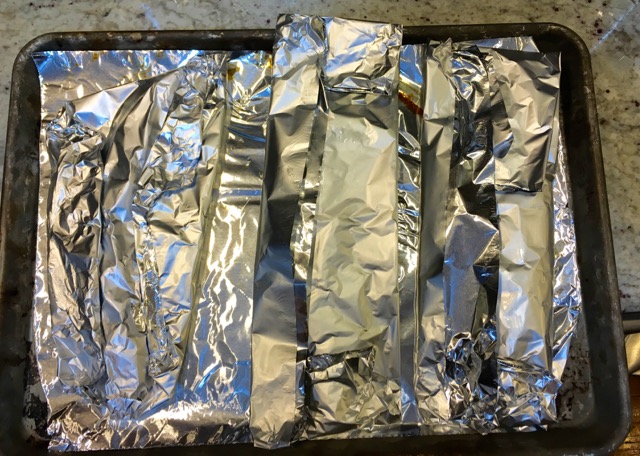 [Nonnie doesn’t give a list of ingredients before the recipe, probably because en papillote is less a recipe than a technique. For those keeping score at home, though, you’ll need:

Fish fillets, one per serving no thicker than about an inch; I went with flounder
One tablespoon of butter per fillet; as per usual, this is not health food
Parsley or other fresh herbs
Lemon juice
Salt and pepper]

Measure depth of fillets, at thickest point, to determine cooking time (which should be about 10 minutes per inch of thickness), and allow a little extra time to enable heat to penetrate the outer covering. [Eh, honestly, if you’re using a delicate fish like I was, you probably won’t need more than 10 minutes total. I went that long, and think I could have even cut down the cooking time slightly for an even flakier result.]

For each fillet, take a piece of foil considerably larger than the fish and cut it into a heart shape. [Why bother making a heart shape? I guess it sort of follows the shape of a fish fillet, but after having tried it once, I’m ready to declare this step unnecessarily fussy; feel free to keep your foil, and resulting packages, rectangular. Perhaps the French would poo-poo that notion, but they’re also impossible to please.]

Lay the fillet on one side of the foil, sprinkle it with salt and pepper, dot it with a tablespoon of butter [this is a lot of butter! You definitely don’t need this much per fillet!], sprinkle with a teaspoon of chopped parsley or other herb, such as dill or tarragon, and a few drops of lemon juice. [A lot of people also add slices of lemon when cooking fish this way, although I think they’re more decorative than they are practical as flavoring agents; to get a real hit of lemon flavor, just wait to add lemon juice until after the fish is cooked, so the acid doesn’t begin to cook it before it goes into the oven.]

Fold the second side of the foil over the fish so the edges meet; fold the edges over and crimp them to make an airtight seal. Don’t cover the fish too tightly—the package should be rather loose on top to allow expansion caused by steam. Each fillet should be wrapped individually.

Place packages on a baking sheet and bake in a pre-heated 450 oven, allowing 10 minutes per inch of thickness and an additional 5 minutes to heat the foil through. [Nope—again, 10 minutes will be just fine.] Serve foil packages on plates, and split down the center at the table so that all the juices are retained. [If you want to be tres Francais, you could also serve them with some delicate braised leeks, as I did—this recipe’s a keeper, even if you skip the parm for fear of additional artery cloggage.] 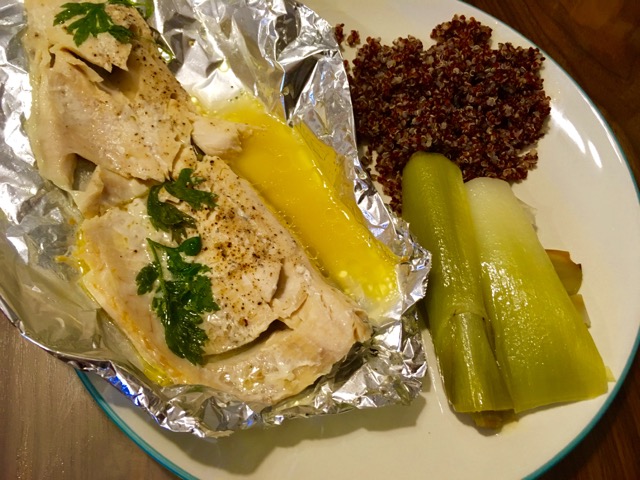 8-10 small carrots
2 tablespoons butter
3 tablespoons water
Pinch thyme
Salt and pepper
1 teaspoon minced parsley [or carrot tops, which taste a lot like parsley! Using them also means avoiding having to figure out what to do with a giant bunch of leftover parsley, then gradually forgetting about it until you discover it in the back of a fridge drawer weeks later, by which point it’s gone brown and mushy and thoroughly unappetizing. Just me?]

Scrub carrots; place in center of double-thickness heavy duty tinfoil. Sprinkle with salt, pepper, thyme, and parsley. Dot with butter and add water. Bring up sides of foil, sealing carrots with tight double fold. Leave some space for expansion. Fold ends up in tight double folds. Place package in 400 oven and cook 35-45 minutes or until tender. 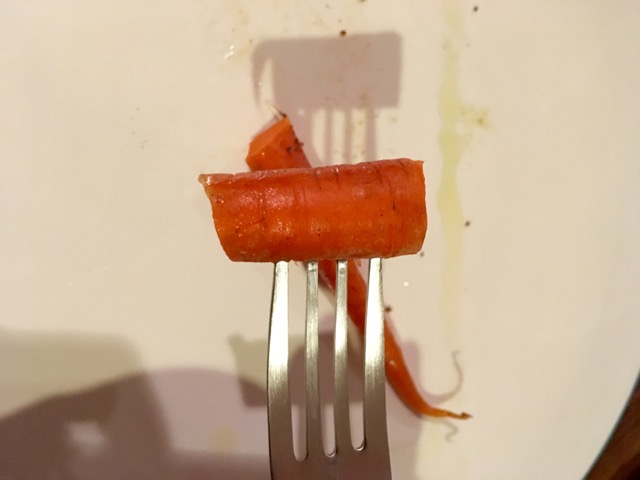 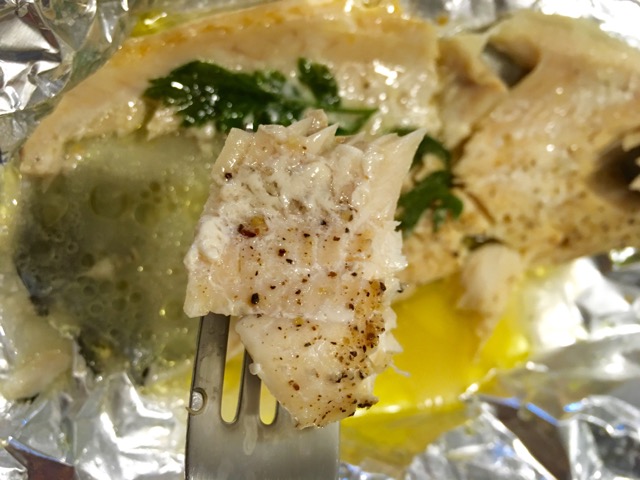 The verdict: After a spate of Nonnie recipes revolving around weirdo appetizers and mayonnaise apples,  it was nice to experience a few that actually acted as building blocks of a balanced meal (provided you take your balance with a load of butter).

Endlessly adaptable as this method may be, I very much enjoyed Nonnie’s basic take on both carrots and fish en papillote, mostly because there’s nothing that doesn’t taste good when slathered in salt, pepper, butter, and lemon juice (which I added to each after they were done). But mostly, I want to treat these recipes as a starting point for papillote experiments to come—fancy, easy, and everything in between. Before you know it, I’ll be wearing a beret and refusing to use the word “post-it.” Bon appetit!